The following morning, we caught the bus from the hotel to the American Queen Steamboat – a distance of 200 metres. We knew it was nearby but not that close. So we boarded the boat (not a ship because its on the river) using our boarding cards obtained when we registered at the Hotel and then found our way to our cabin on floor 4. Although an internal cabin, it looked to the chart room and out across the bow deck – an excellent position and a large cabin.

We took a stroll around the boat. Starting at the top on the 5th floor there are the wheel house and the exclusive cabins, swimming pool and gyms. Fourth floor is the chartroom where the Riverlorian Jerry hides out, cabins, the front patio and one of the only decks allowing you to circumnavigate the boat. Third floor is cabins, and the front patio which is the smorgasbord all day dining. The front patio is an undercover patio deck with access to the engine room and the engine room bar. Second floor has the Purser, the Tour director and gift shop. It also includes the gentlemen’s card room the ladies parlour and the library. First floor has the main dining room and the theatre where evening performances delight. 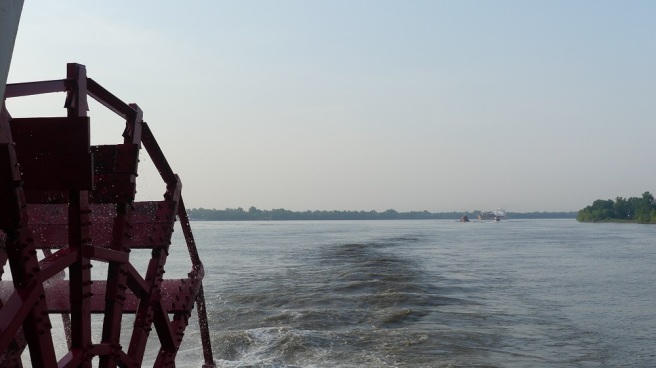 When registering onto the boat we selected our tours but in addition we could register daily (if quick enough) for the hop on hop off bus tours of our daily stops. The boat set sail (nautical term – there are no sails on a steam powered paddle boat). We made our way up river to our first port of call – a stop at “Nottoway Plantation” – an antebellum plantation home.

The boat landed by running onto the bank. this was an exercise that the crew would go through many times. Two unfortunates had to get into the water and receive the ropes then find the anchor spots under the water in the bull rushes to tie up the boat. On this occasion they used a tree to tie up at the stern. Then a walkway was lowered onto the bank and we walked over to the levee (nearly the length of the river has levee banks) up and over the levee to the entry of Nottoway.

We were greeted by our tour guides in costume of the time of building before the American Civil War. Our guides toured the house giving us its history of its first owners and the impact of the American Civil war.  In 1855 John Hampden Randolph purchased 400 acres (1.6 km2) of highland, and 620 acres (2.5 km2) of swamp and Mississippi River-front land to grow sugar cane and where he sought to build a prestigious home that he named “Nottoway,” after Nottoway County in the part of Virginia where he was born. The plantation house is a Greek Revival and Italianate-styled mansion built by John Hampden Randolph in 1859, and is the largest extant antebellum plantation house in the South with 53,000 square feet (4,900 m2) of floor space.

Soon after the house was completed the Civil War began. Randolph did not support secession from the Union, but once the war began, backed the war financially and sent his three sons to fight for the Confederacy, losing his oldest son, Algernon Sidney Randolph, at the Battle of Vicksburg. With the war coming ever closer to Nottoway, it was decided that Randolph would take 200 slaves to Texas and grow cotton there while his wife, Emily, stayed at Nottoway with the youngest children, hoping that their presence would save it from destruction. The plantation was occupied by both Union and Confederate troops and though the grounds were damaged and the animals plundered, Nottoway survived the war with only a single grapeshot to the far left column that did not fall out until 1971.

With the emancipation of the slaves, John Randolph contracted with 53 of his former slaves to continue working as paid laborers; when he returned to Nottoway after the Civil War, most chose to return with him. The sugar business was not as profitable after the war and by 1875, Nottoway was reduced to 800 acres (3.2 km2). John Randolph died at Nottoway on September 8, 1883, leaving the plantation to his wife.

Emily Randolph sold the plantation in 1889 for $50,000, which she divided equally among her nine surviving children and herself. She died in Baton Rouge in 1904. Nottoway has become a resort destination. 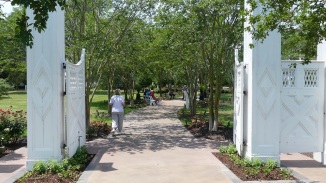 We returned to the boat for lunch whilst the boat moved further up river to St Francisville where we caught the hop on hop off bus to Louisiana and the plantation “Myrtles” which was an unscheduled stop on the hop on hop off tour that day. Generally, the hop on tours were disappointing (the towns are rural mid-western towns like any Queensland rural town providing a centre for the rural communities surrounding it). This was interesting because it claims to be the most haunted place in USA and has documented proof of its ghosts.

The Myrtles has 22 rooms spread over two floors. The Myrtles Plantation was built in 1796 by General David Bradford on 600 acres and was named “Laurel Grove.” Bradford lived there alone for several years, until President John Adams pardoned him for his role in the Pennsylvania Whiskey Rebellion in 1799. In 1834, the plantation, the land, and its slaves were sold to Ruffin Gray Stirling. Stirling and his wife changed the mane of the plantation to “The Myrtles” after the crepe myrtles that grew in the vicinity.

The Myrtles survived the American Civil War, though robbed of its fine furnishings and expensive accessories. In 1865, Mary Cobb Stirling hired William Drew Winter to help manage the plantation as her lawyer and agent. Winter was married to Stirling’s daughter, Sarah, and they went on to have six children, one of whom (Kate Winter) died from typhoid at the age of three. In 1871, William Winter was killed on the porch of the house, possibly by a man named E.S. Webber. After being shot, he staggered inside the house and died trying to climb the stairs. He died on the 17th step of the stairs. Visitors, as well as employees in the home, still hear his dying footsteps. Touted as “one of America’s most haunted homes”, the plantation is supposedly the home of at least 12 ghosts, historically only Winter’s death has been recorded. Our tour guide maintains that Mrs Winter and two of her children were poisoned by a negro maid who had her ear cut off by Winter for eaves dropping and ejected from the house to work with the field slaves. To try and ingratiate herself in the household again she intended to make the children sick but she poisoned all three and in turn was killed by the other slaves fearing reprisals from the master. The one eared ghost steals visitors earrings as evidenced by the large number of single earrings found in the house. National Geographic are said to have sent an investigator who captured photos of the spirit and the ghosts of the two children and these are on display at the house. The rest of the town was rather unexciting. We visited the local Presbyterian Church (the usual unadorned interior for this religion) and then across the road passed the court house after which we returned to the boat. 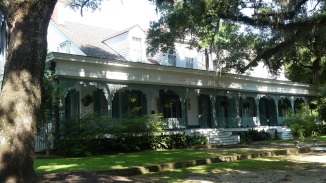 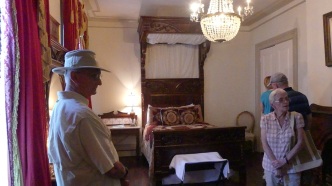 Dinner was great. We found ourselves seated with Jim and Jacqui both retired teachers from Chesapeake Bay Maryland. We struck up a great rapport with them and can count them amongst “our new best friends”. The dinner was superb, and the evening show followed. The performers were excellent but we made the mistake of not booking our hop on hop off tour for Natchez the next day.

One thought on “The Retirees in the South East USA – All aboard the American Queen – the Mississippi River, Nottoway Plantation and St Francisville”