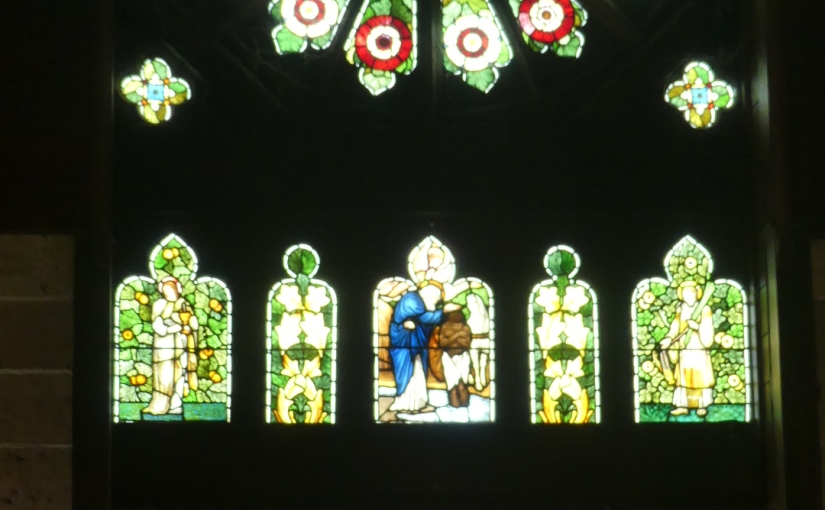 It was still windy, raining intermittently and grey overhead. We had planned to visit St Barnabas Chapel and then go on to the craft market. So, we went to church for the Sunday mass to see the church again and mix a little with the locals after church. Bindi was helping out on the morning tea.

The foundation stone was laid in November 1875, but the building was not completed until June 1880. The mission church, St Barnabas Chapel, was built as a memorial to Bishop Patterson who was killed by natives in the Solomon Islands in 1871. The chapel is simply beautiful. The four windows in the apse depict the four evangelists, the seats are carved and inlaid with Christian symbols in mother-o’-pearl, polished black and white marble paves the broad aisle leading to the sanctuary, which naturally is the most beautiful portion of the chapel, with its coloured marble floor, and glittering mosaic reredos screened with richly-carved wood. In the centre is a massive silver cross that has been made out of Bishop Patterson’s own table-silver, and this is flanked by silver candlesticks and vases of flowers.

After the mass we walked across to the hall where Bindi was serving coffee and cake. We collected our coffee and cake and started to mingle. We were mixing very well, until we were joined by a tall, stooped man who seemed to make everyone else fade away. He started to espouse the benefits of Christianity and we realised he was the local “bible basher”. Still, we enjoyed experiencing a Sunday mass Norfolk Island style. Our photos show some of the architecture and stained glass of St Barnabas Chapel which seemed very out of keeping with the rest of the Island’s architecture. In the fields surrounding the church was a monument which we were told marked the original church graveyard and the modern graveyard was within the church grounds.

The Chapel,the marbled aisle, stained glass, the original cemetery and the tree obscuring the toilets

Our walk of 500m will give us a view to the north of the island. At the peak of Pitt there is a grassy knoll with picnic table and a vehicle round-about circling the grassy knoll. To the east is the track to Mt Bates.  Shaded by the abundant growth along the track Kerry spotted butterflies and spent some time trying to photograph them. The walk was quite easy and relaxing. From here you could see the runway of the airport houses and ocean.

During WW II a radar station was set up on Mt Bates. There is little to tell the tale, but you can go and view the cement slab on which the radar shack once stood and observe a derelict piece of machinery which played some role in the operation. Then you climb to the peak of Mt Bates where there is another grassy observation platform from which you can observe the modern telecommunication dishes on Mt Pitt, the ocean and some houses. Nothing really remarkable. There are a number of paths leading away from the peak to who knows where, so we elected to return by the route whence we came. As we returned, we pass some tourists like us taking a stroll from Pitt to Bates. These are the only people we will see on the walk. We arrive at Pitt get in the car just as the rain commenced to fall, look at one another and ask what now. Before revealing the next adventure, here are my photos.

From the top of Mt Pitt, follow the walking track, pass the remenents of the radar station, to the top of Mt Bates and view the radio towers on Mt Pitt then walk back (having a little rest) passed the wall of caged rocks and back to Mt Pitt.

We decided we would look at the north west of the island so we drove along Mt Pitt Rd into Mission Rd and partway along spotted a local “honesty stop” offering local honey jams and fruits. We both immediately thought of suggesting this style of selling to Mrs Hayes for all her surplus jams and pickles. I cannot recall what we bought probably local honey and pushed on to Ona Cliffe taking a righthand turn to Anson Bay Rd. I am pretty sure this was the first time we spotted the Sunset Bar at Puppies’s Point. It was closed at the time but we noted the opening hours and the owner spotted us taking a booking for the following evening. We pulled in at the park overlooking Anson Bay and moved onto the Gun Club. There are two establishments side by side – the pistol club and the clay target club – both perched on Anson Point home to a Masked Booby colony. There is a fence on the cliff edge to keep people and cattle from falling in the many Booby holes where they nest. The birds were not frightened by people and I was able to get very close to them. They are quite a large bird and certainly seem to have worked out how to share its habitat with Sapiens.

We drove on to Point Howe following the wind and standing in a howling gale we spotted a wedged tail shearwater. Watch the ocean at sunset and you may sight a shearwater floating on the water or on the air currents before coming ashore just after nightfall. Known to the locals as ‘ghost birds’, you can hear their moaning calls echoing across the island at night. Shearwaters cover vast distances during their annual migration, travelling as far as 300 km a day on their way to Norfolk to breed.

We visited Cottage Pottery at the very end of Anson Road opposite Fisherman’s Lane before heading back to the Sunset Bar. Cottage Pottery and Art Gallery is in the backyard of a house on one of the remoter parts of the Island, but it is not the backyard pottery shop. The proprietor Steve Ryves told us that they were noted for producing high fired stoneware and porcelain. Steve is the potter and Alison paints and makes jewellery. Their work is exhibited in a gallery attached to the pottery. As you enter there is a pen of kids (goats). It turns out that their daughter has the main herd and produces goats cheese of some quality and renown on the Island. We promised ourselves we would find her farm as she does tastings but alas it was not to be.

The Sunset Bar near Puppies Point is a relaxed outdoor licensed venue providing full bar facilities with tasty platters (both hot and cold),exotic cocktails, stunning sea views and Great music and vibe. It looks like a house on a large block until opening hours when the locals and tourists book to visit for dinner as the sun sets. The trio on guitars entertained us but all looked familiar – I think one was our bus driver on one occasion.

We sat with a couple who managed one of the accommodation resorts on the island shared a few drinks and something to eat but it was all a bit tame. They had not advertised that they were opening so they only attracted the locals (on purpose is my guess), it was overcast, and the sunset was obscured – so there were a few reasons it was a bit flat and quiet. After driving home, we decided it would be a good night to read a book at the unit.