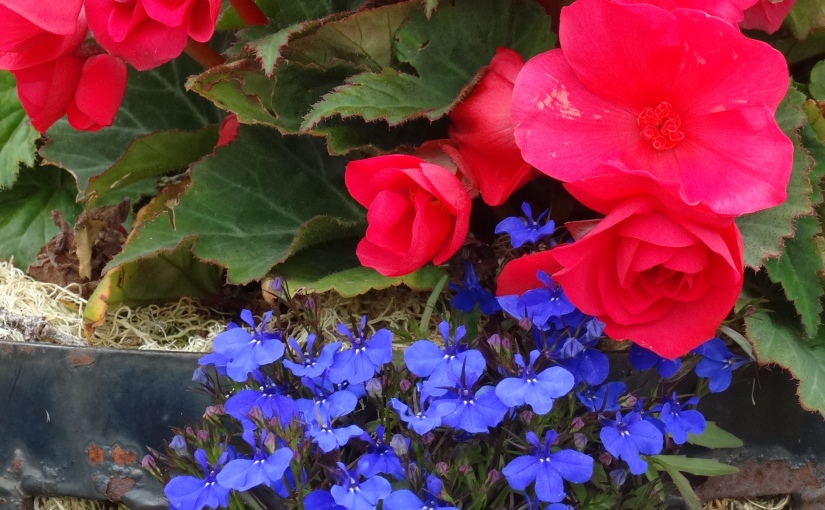 Since we returned from Buckingham Palace we have continued our routine as members of the community in Long Eaton. Part of that routine is to assist at St Mary the Virgin Church at Attenborough. On our last working bee we were not sur e whether we may fit in another working bee so I took a photo of the Clean – up Crew. It has always been enjoyable working with this group of dedicated volunteers. As we work amongst the graves most days, we can probably include a few of the spirits around the place but of course they were absent for the photo.

Photo of the crew in the Vestry at morning tea 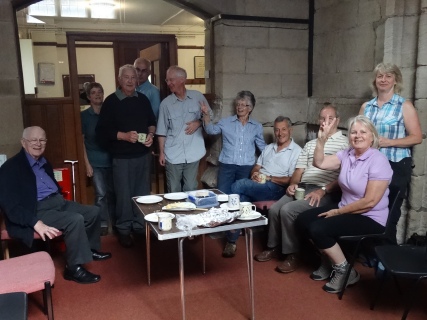 The other group we routinely meet with and work with is the Rotary Club of Nottingham. The same thing applies here. We enjoy the company of all the members (despite their gentle ribbing when Australia shows its glass jaw in the cricket) and they seem to genuinely enjoy our irregular appearance and assistance. George, one of the senior members of the Club has held an annual Summers Garden Party and has done so for years. He always seems to pick the summer day and then the weather returns to usual UK weather and this year was the same. Though I was not confident that it was warm enough for swimming and stayed dry.

Photos of our host George, the new President John and Geoff, Past President Roy and David Kerry and the girls

The UK is a small place when compared with Australia but despite this it is always taking us longer than planned to travel anywhere by car because of the infernal delays on the motorways and slow trek when forced onto country roads even though the scenery is often stunning. So we planned our trek to Edinburgh (some 5 hours north) into two days – Harrogate and Fountains Abbey on day 1 and Edinburgh day two.

Harrogate is north west of York and famous as a spa town in Georgian times. Our hotel – the Majestic – although a relic of the Victorian age, is a good example of the idle pursuits that the town became famous for. Built in 1900 in 12 acres of parkland and only 5 minutes walk from the centre of Harrogate the hotel must have been the 7 star hotel of the Victorian era but today it suffers from its glorious past belonging to an era that is not to everyone’s taste today. Sad opulence I would describe it as. But it provided a wonderful backdrop for our wedding anniversary and staging point for Fountains Abbey and Edinburgh.

Dinner in the dining room that night and breakfast the next morning before we took to the treatment rooms for a massage and then a relaxing swim and spa. The way it should be always.

The town itself was easy to navigate but seemed to have become stuck in the same era as the Majestic. However we found a park with a photo frame and when others saw us a number wanted to copy us and we became unofficial photographers for three or four families. 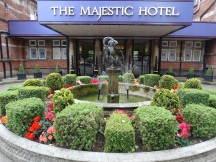 Nearby to Harrogate is the ruins of Fountains Abbey and its gardens and it is a story in its self for another day.