The excitement of Porvoo behind us we decided we would determine the best means and route to our cruise ship – another excuse to use our pass for free rides on the trams. We walked away from the bus station and caught a tram which we had determined would take us to our cruise ship terminal. Well we took the wrong tram in the wrong direction. It took some time for us to wake up and but for a monumental church which we had not seen before we would not have worked it out. So we got off the tram and investigated the church and the surrounding apartments in their art deco style.

Kallio Church is a Lutheran church in the Kallio district of Helsinki. It was designed by Lars Sonck and represents National Romanticism with Art Nouveau influences. The National Romantic style manifests itself in the use of traditional Finnish materials and in the massive body of the church, as well as in nature-inspired colours and decorative motifs. The grey granite church, completed in 1912, is one of Helsinki’s most readily identifiable landmarks. The church has a height of 65 metres, and its cross is 94 metres above sea level. The Estonian coastline can be seen from the tower. The church is on a hill, and it forms the northern end point of a 2.5 km long street axis made up of three streets.
Kallio church is a hall church with a transept. The load-bearing walls are built of red bricks and clad in Finnish granite. There is seating for 1,100 worshippers. To stand below it looks more like a skyscraper than a church. We circumnavigated it and then entered. It is plain interior when compared to Italian churches. The church is decorated with Christian symbols such as roses, lilies, palm branches, laurel crowns and pearls to pass on the message of the Gospels.
Across the road is a block of apartments continuing the art nouveau theme. That is as far as we got when our return ride arrived. This time we did make it to the cruise ship terminal, but it was the wrong one. Helsinki has two major terminals and below are pictures of the wrong one so far as we were concerned. It appeared there is no tram goes to the new terminal. 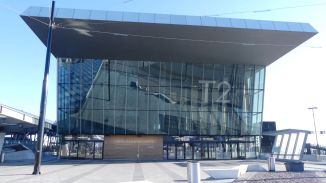 Not only was this the cruise ship terminal it was the tram terminal. We alighted our tram unsure about how this was going to work. The tram moved off and stopped at the next stop 100m away. So, we walked up and reboarded the tram and after an appropriate waiting time (no ships no people) the tram returned to our stop – again we were surprised how close we were. If Kerry had not recognised the tunnel to the bus station, we would still be on that tram. We walked to the apartment put our feet up and had a drink – less to carry on the ship. We cleaned out the fridge for dinner then packed for the cruise ship tomorrow.

As usual we had to vacate by 10.00am. We decided to catch an Uber to the cruise ship given we had all this luggage and there is no tram will take us there. Fun and games ensued. Once we walked out of the apartment we had no internet and therefore no contact with the Uber driver but somehow we found each other. A friendly chatty Muslim from the middle east or Africa originally, we could not understand him nor could he understand us so he took us to the cruise ship terminal we visited yesterday. Fortunately, our ship was docked and in view so we frantically pointed out the ship and he obligingly searched out the terminal delivering us safely to the SS Regal Princess. We made our way to the check in tent where we were issued with an electronic tag. this was to prove an interesting experiment in big brother.

After finding our cabin down the back of the boat (in proper naval parlance – the stern of the ship), we took a walk around and I took some initial photos of the distance from our cabin to the lifts to take us to the brasserie on floor 16. We also went to the centre of the ship (midships) and the marble stair cases, the casino and the gift shop. 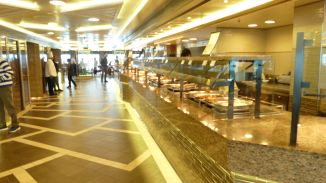 We decided there was plenty of time to explore the ship, so we found a good possie on the stern deck near the bar and watched as the ship cast off and set sail. Nearby was the SS Sapphire Princess and the musical exchange on the ships horns as we left was interesting as the Regal Princess’s horn plays the tune to “Love Boat”. This gave us a chance to see the islands sheltering the harbour of Helsinki and some of the other vessels plying the water ways. 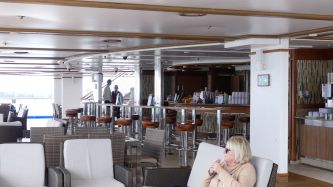 So life aboard the ship began and I am confident there were 3,500 plus passengers on board. Our first port would be St Petersburg where we would anchor for two days. But before then we had our first experience of dining on board and taking in the show. At dinner we purchased a bottle of wine for consumption over the next few nights and there is a story about this bottle of wine. However the show was superb. A Beatles cover band, they dressed the part, played the music and sang the songs just like the Beatles. It was not long before we were on our feet singing and dancing along. 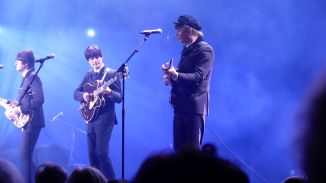 And so ended our embarkation day from Helsinki. St Petersburg tomorrow.