It’s Wednesday. Roberto and Sue are off to the Dolomites. We are going in the opposite direction to Lake Maggiore and the three marvels of Maggiore – Isola Madre, Isola Bella and Isola Pescatore. Well that is what Roberto told us but in truth Pescatore is another tourist trap with little of culture history or architecture to recommend it. If you want to buy a T shirt or go for a swim its fine but otherwise it is not a marvel. The third marvel is Rocca di Angera.

To understand why these rocky islands have been turned into marvels you have to understand the history of the current owners. Let me introduce the Borromeo family. “The aristocratic Borromeo family were merchants at San Miniato around 1300 and became bankers at Milan after 1370. Vitaliano de’ Vitaliani, who acquired the name of Borromeo from his uncle Giovanni, became count of Arona in 1445. His descendants played important roles in the politics of the Duchy of Milan and as cardinals in the Catholic Reformation. In 1916 the head of the family was granted the title Prince of Angera.” “The family has owned the Borromean Islands since the 16th century. The islands have beautiful gardens. Two of the islands have grand palaces, still owned by the family. Vitaliano Borromeo built a summer palace on the Isola Bella for his wife Isabella between 1650 and 1671 which was later enlarged by cardinal Giberto III. (1615–1672) and count Vitaliano VI. (1620–1690). Count Carlo IV. (1657–1734) had the garden terraces added. The family still owns the majority of the Borromean Islands.”(Source – Wikipedia).

Pescatore was a fishing village and now one large shop/ rest stop for tourists. Rocco on the other hand was a fortified castle which together with Rocco di Arone (a fortified castle on the opposite shore destroyed by Napoleon when invading Lombardy) controlled the place where the lake drains into a river. We visited Isola Madre and Isola Bella on Wednesday and Rocco di Angera on Thursday. We chose to travel to Stresa and to catch a water taxi to each of the 3 islands for 15 euros each one way. The taxi (looked like a Venetian canal cruiser) takes you to Madre and gives you 2 to 2 .5 hours to view this island and its palace. I formed the view that the taxi operators want you to go to Pescatore where they hope you will spend your money. I wonder if the taxi operators don’t get any additional revenue from Madre or Bella hence the limited time on Madre. At Pescatore the taxis call every half hour to take you to Bella with the last taxi leaving at 4.30,

“Isola Madre, at 220 m wide and 330 m long, is the largest island of the Isole Borromee archipelago which falls within the Italian part of the Alpine Lake Maggiore, in the Province of Verbano Cusio Ossola, Piedmont.” Wikipedia

We boarded our Venetian canal cruiser and glided across the lake to Madre. As you approach this little rock by boat the first thing you notice is the palace covering just about the whole island. A little closer and you see a gift shop and restaurant called La Piratera (and like the pirates of old they will rob you blind) sitting hard up against the water but that is the only commercialism you will encounter. Sure you have to pay to get in to the gardens and the palace but you will appreciate this is a moderate cost for what you see. Try to purchase a ticket which gets you into Madre and Bella (35 euros) and save 5 euros and unless you are very interested in the botanical information on the garden don’t worry about the programme.

The walk to the palace is cool and relaxing with outstanding Lake views. Plants from all over the world are in a garden designed for the leisure of the stroller. Australian casuarinas to black bamboo are some of the strange plants found here. There are white peacocks and other large birds roaming around and an aviary but the most amazing piece was a large Tibetan Kashmir cypress (Cupressus cashmeriana) which appears to have been planted in 1862 following a trip to the Himalayas. Until 2006 it had grown steadily to its grand height towering over the palace. Then a whirlwind uprooted the tree but rather than pull it out the family replanted it and supported it to where it continues to survive to day.

We toured inside the palace but photos were not permitted. Unlike other palaces I have visited this had the feeling of openness and light, coolness and relaxing surroundings. It has not always been a home. There is a lot of evidence of gun emplacements and guard points. One of the surprises was the marionette theatre and the variety of the marionettes in the house. These were for the entertainment of the family and their guests but I was to be surprised even more at Isola Bella.

The island structures are completed with the family chapel.

When we arrived at Madre there was only one other couple with us but the numbers quickly grew. When we sailed for Pescatore the boat was full as was the island. It was lunch time so we went looking for a restaurant. We crossed the island to get away from the crowds and chose an outdoor umbrella restaurant for no other reason than it looked inviting. Unfortunately looks are deceiving and we waited for 1 hour to get a salad and a pizza. Like most of this island this was disappointing.

There was an interesting small church on the island and some interesting houses and lanes. The church had a cemetery at the back and all of the tombstones had a photo of the deceased – something I have not seen before. Amongst my photos you will see a Jolly Roger and I thought that was the definition of Pescatore. So we sailed for Isola Bella. 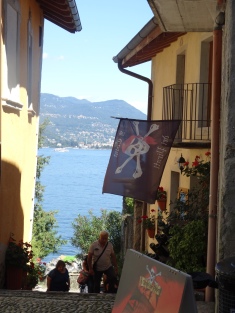 the Jolly Roger on Pescatore 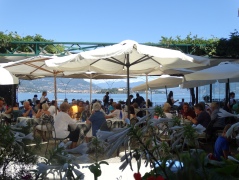 Where we should have had lunch

As you approach you are struck by how large this palace is and how much of the island it consumes. Unlike Madre this is palatial as well as grand. No photos were permitted but like most laws and speed limits in Italy everyone ignores them so you will see my photos below.

At the entrance there is an enormous hall with a domed ceiling. I got some of the best views of Pescatore and Madre from the windows of the palace. Then there were the marionettes and the theatre settings. These were just wonderful. I have given you just three examples in my photos.

The gardens were very different from Madre but just as wonderful. At one end is a wall of statues and fountains which run back down to the lake in 10 terraces. I found a pond in which there was a frog croaking but I could not find the frog so I photographed one of the water Lilly flowers instead. But the unique thing was the grottos.

Rooms in the palace decorated to look like underwater grottos. I have taken photos and they will give you an inkling of the amazing scenes.

We got back to Stresa about 4.00 pm and I noticed on the way back that there was a cable car running from a building at the wharf up into the hills. We investigated and not really understanding what we were doing we parted with 40 euros to ride the cable car and do something else when we got to the top.

The trip started very quickly travelling by cable car up to Mottarone 1385 metres above the lakes. We could see the three islands then the whole of the lake but we were nowhere near the top yet. We changed cable cars and went up to 1491 meters where we took a chair lift to the top. I have no idea of the height at the top – suffice it to say it was high and above 1500 metres.

From the top we were able to see the whole of the lakes district for 360 degrees. We also saw the Alpyland fun park. For a further 5 euros each we took a trip on the bob sled ride on rails. 1.2 klms of twisting down hill track and a bloody steep hill at that. Threatened with the loss of my manhood I drove the bob sled with Kerry in front of me and kept the sled to a reasonable pace (he he he heeee – she screamed her head off). I got a few photos which will give you the idea and show you the scenes from the top. Truly magnificent and well worth the cost.