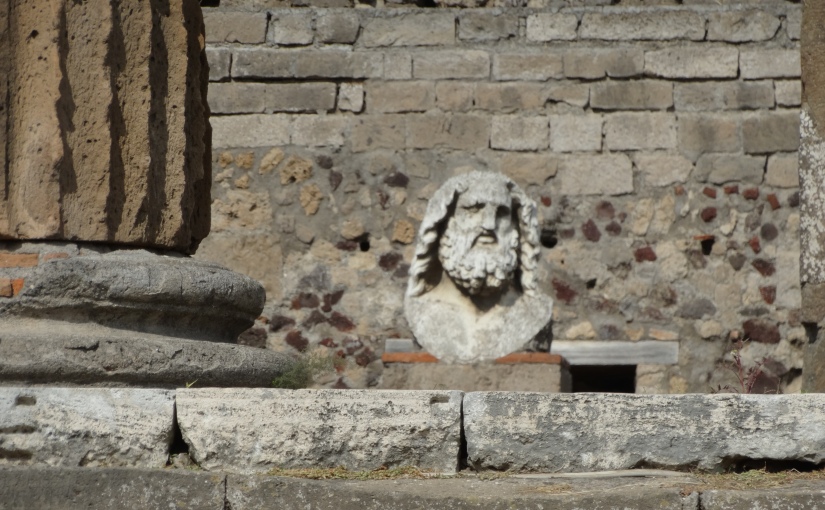 We had decided that we would visit the ruins of Pompeii rather than the nearby Ostia Antica (which we were assured was just as impressive as Pompeii) even though it was some 3 hours by bus to get to Pompeii. Pompeii is something of legend. A Roman town destroyed by a volcano in 79AD leaving an intact record of life at that time for all generations to see.

This was a full day and we had to be at our rendezvous Enjoy Rome by 7.30am. We had on a previous day searched out the offices of Enjoy Rome and it was a good thing we did. It was located in a house near Terminii Rail station but due to a large tree the sign identifying it was obscured. It took us an hour to locate it and then identify the easiest route for our Wednesday trip. So through good planning we arrived a Terminii for breakfast and were able to make our rendezvous with 15 minutes to spare. There were 17 of us on the bus plus guide and driver. The bus trip took 3 hours broken by a stop at Monte Cassino a spot that should have been well known to the Americans with us because of the battles with the Germans during WW2 to liberate Italy and the bombing of the Abbey of Monte Cassino.

Our guide was an Ecuadorian immigrant who basically marshalled us and introduced us to our Pompeiian guide Andrew (anglicised version of his name I guess). We were equipped with radio and given strict instructions on when to return for the bus and then set free.

“The eruption of Vesuvius killed the city’s inhabitants and buried it under tons of ash. Evidence for the destruction originally came from a surviving letter by Pliny the Younger, who saw the eruption from a distance and described the death of his uncle Pliny the Elder, an admiral of the Roman fleet, who tried to rescue citizens. The site was lost for about 1,500 years until its initial rediscovery in 1599 and broader rediscovery almost 150 years later by Spanish engineer Rocque Joaquin de Alcubierre in 1748.” (Wikipedia – http://en.wikipedia.org/wiki/Pompeii)

Our tour started with a short history lesson as we walked along a modern path past some of the ruins to the entry through the Gladiator Barracks (which looks more like a college square with the barracks along one side and a portico along another. Andrew was of the view that it is unlikely that Gladiators lived and trained here and that it was more likely an assembly area for the theatre and the “barracks” storerooms/prop rooms for the theatre. From here we moved into the large theatre which was remarkable as it demonstrated the transition from an auditorium with a pit to an auditorium with a pit and stage. 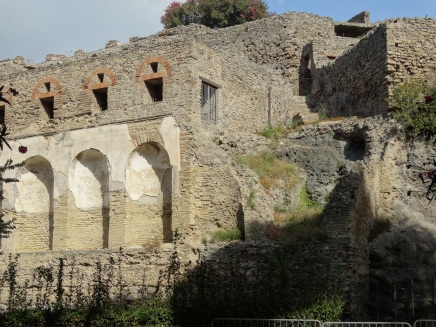 Walking along the path we saw our first ruins…. 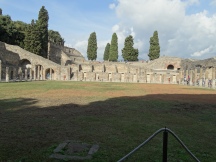 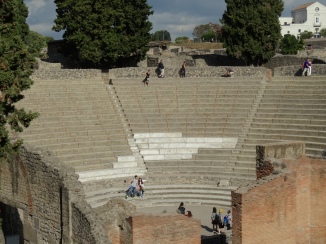 seating for the theatre

We exited onto an area that looked like the sort of exercise track we have today only used by Fred Flintstone (everything in stone) – running track etc. beside the ruins of a Greek (yes Greek) church. Now I may not get this exactly correct but by my reckoning this was the Temple of Isis and from there we moved onto one of the minor roads in the city to visit a “modern brothel” (modern in the sense that language was no barrier – you pointed to a picture on the wall displaying the type of transaction you wished to conduct and believe me they were all portrayed, a bit faded with time but legible). Now the sex industry must have been a big business as there were quite a few buildings dedicated to this purpose and they seemed to be landmarked by large phalluses and scrotums in stone in the footpath and walls of buildings. I was tempted to suggest Biggus Dickus was one of the proprietors, but resisted. (Since visiting Pompeii I have seen a BBC documentary on Pompeii and they put a different interpretation on the graphics on the brothel walls and the numerous phalluses around the city)

where business is done 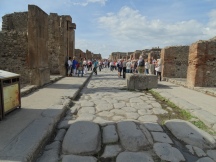 Andrew and Kerry at the fountain

Throughout the ruins were water fountains. Our Bus guide warned us about drinking the water from these fountains but as though he knew the challenge had been made Andrew made a point of drinking form a fountain and inviting us to do likewise.

We made our way into the Forum. Andrew pointed out that this was not only the political hub of the city but the community hub as well with a temple to Zeus, a fish market, granary and store. Here we also saw the first of the human casts made by the volcanic ash. It was here that we became aware that there were 5 Aussies out of the 17 member tour and two were from Mt Gravatt.

forum – part of the senate building

Forum view to Temple of Zues

Part of Portico around forum 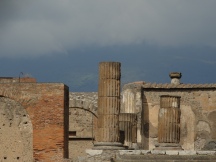 part of the market in the forum

Temple of Zeus or what is left

amphora discovered in the forum

fish market off the forum 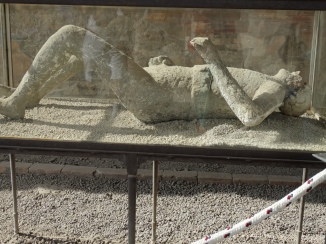 cast of a citizen caught by the volcano

We visited the central baths, the House of the Vettii, and the house of the Faun with Andrew. He pointed out that small business existed even then showing us a BBQ with residence attached where the proprietor would sell BBQ products (the start of the “lamb sandwich”) and the family live in one or two rooms behind. He pointed out the difference between commercial and domestic dwellings and the “green” credentials of the houses each with their own cistern for catching rain water. The House of the Faun is the largest of the homes in Pompeii, built during the 2 nd. century BC, and most impressive private residences in Pompeii. It is one of the most luxurious aristocratic houses from the Roman republic, and reflects this period better than most archaeological evidence found even in Rome itself The House of the Faun was named for the bronze statue of the dancing faun located, on a basin for catching rainwater. It also has many features such as floor murals and decorations to establish its opulence. (The BBC programme challenged this also showing an even grander ruin)

Entrance House of the Faun

wall in the House of the Faun

Floor in part of the House of the Faun

Cistern in centre of house

Entrance House of the Faun

Courtyard House of the Faun

the portico – House of the Faun

the Faun on the cistern

wall frescos in well to do house

The baths were also fascinating as they showed just how ingenious these people were at finding solutions to providing services much the same as we enjoy today. They also had an understanding of “feng shui” with how they designed their living spaces. For instance in one house the largest room was a type of family room which encompassed dining and relaxation whilst the bedrooms were functional – just for sleeping. There were centre courts for light breeze and catching rain for the water cistern. (The BBC presenter made the point that there were no drains in the baths and that the water, although hot, was probably rancid with piss and sweat)

portico over the baths 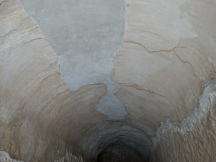 Although this tour was for two and one half hours, time passed very quickly and we found ourselves outside a renovated building (probably the only one) turned into a modern café and rest room. Andrew gave instructions to those hearty individuals who wanted to explore more on their own and bid us adieu.

Although the roads were paved time had made them fairly rough. The uneven roads, the heat of the day and the tedium of looking at piles of stone meant we did not seek to go beyond where tourists go but rather to look in more detail at things we had seen with Andrew. We went back to the forum and made our own way through the Temples of Jupiter, Apollo, and Venus down to Marina Gate. Here we ended our tour of the ruins and made our way to the Hotel Vittoria for a cup of coffee and a chat with our Australian comrades.

With the return of the bus we boarded for the return journey. Again we stopped at Monte Cassino and our bus tour guide relayed the story about the bombing of the Abbey. This was the site of 4 major battles both to liberate Italy but also to tie up German resources for the D Day landings. There were Americans, British, Ghurkha, New Zealand, Free French and Moroccan troops involved and the bombing of the Abbey turned out to be a complete blunder. The allies thought the Germans were using the Abbey for spotting when in fact they were not. The Allies sent over 140 planes to bomb the crap out of the Abbey which they did and then the German’s occupied the bombed site. There were 4 battles to push Hitler’s Tenth Army back to Rome.

After this stop we settled in for the journey home during which Kerry spotted some interesting buildings and monuments snapping pictures on the way.

Finally home around 9.00pm and the lights of the Jolly Pizza were still burning. Another enjoyable repast and off to bed. I have the early signs of a cold and we know that tomorrow we go to the opera returning home around 11.00 o’clock and having to get up at 5.00 am for an early start to the airport.

Another part of the National Museum

They still copy the Romans

Another piece of antiquity stolen from Egypt

Next day was spent relaxing in our hotel room until late in the afternoon when we travelled into Terminii to visit Museo Nazionale Romano – Palazzo Massimo (closed Mondays). After having visited Pompeii this was dramatic with statuary, jewellery, frescos and architecture from that time. Well worth the visit and it closes later in the evening so no excuses for not going. If you cannot visit then visit the web site: http://archeoroma.beniculturali.it/en/museums/national-roman-museum-palazzo-massimo-alle-terme.

After the museum we went to the Teatro Dell’Opera Di Roma. Now I am not a fan of the opera but I do enjoy certain arias sung well. This was a performance of Rigoletto by some of the current best in Italy and was best quality. I was not feeling like being at the Opera but the performance was certainly worthwhile. I suggest that before visiting any opera that you research the story otherwise you will be lost in all the theatrics.

So ends the tale of our visit to Rome. We arrived home safely and the journey by bus was quite tolerable – better than 4 times the cost by taxi; we are pensioners now.