We have been fortunate over the years to have good neighbours and the same has happened here in Long Eaton. John and Pam are a retired couple who have lived their whole lives in Nottinghamshire and Derbyshire and know the area well. So when they suggested we go to Bakewell Markets we jumped at the chance.

Bakewell is a small market town and civil parish in the Derbyshire Dales district of Derbyshire, England, well known for the local confection Bakewell Pudding. It is located on the River Wye, about thirteen miles (21 km) southwest of Sheffield, 31 miles (50 km) southeast of Manchester, and 21 miles (34 km) north of Derby; nearby towns include Matlock to the south east, Chesterfield to the east and Buxton to the west northwest. The town is close to Chatsworth House and Haddon Hall.

We drove in Thistle guided by Tommy winding in and out of country lanes. John commented he had never travelled to Bakewell in the direction guided by Tommy so he guided us home. You have to wonder what goes on in a GPS sometimes because John’s directions were far more straight forward.

After walking past the cattle sales we crossed a small stone bridge and I got very excited to see a good size trout in the crystal clear water. We proceeded further to cross a second larger stone bridge beside a weir. As we crossed Kerry noticed that there were hundreds of padlocks of various kinds and sizes attached to the rails on the bridge. These are known as “love locks” attached over water to represent eternal love between lovers. However I was more interested in a grey crane wading in the river and tens of these trout lazing in the current all around two kilos in size. John identified them as brown trout and very delicious.

Weir on the Wye

We proceeded on into the market stalls which crawled through the village. Everything from farm products to craft and some “antiques”. We stopped for a cup of coffee and purchased Bakewell Puddings to sample. Very sweet and greasy.

Strange woman laughing at me 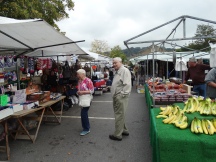 John and Pam do their shopping 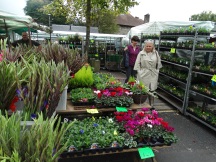 There she is again

After about 1 hour we had seen the markets and the village had a cup of coffee and it was time to go home. So we wound through the markets where a very Muslim looking vendor charmed Kerry to purchase some new bath towels. John was greatly amused saying that this chap was a fixture at the markets and was always putting on a show to make a sale.

Want to buy some towels

Anyway I hope you enjoy the pictures.