Well it is now three weeks since we returned from our Xmas New year tour with the Bishops and apart from hosting a short visit by Svien Koningen, we have been conserving our resources. In this period we have walked our canal, visited Crown Derby Porcelain Factory, toured the peak District to see it in snow, a day tour commencing with a walking tour of Long Eaton, followed by visiting Attenborough Wildlife Reserve, University of Nottingham St Lawrence Centre, Ye Olde Trip to Jerusalem, Southwell Minster and Thoresby Hall. Then we tripped down to Thornton Reservoir, and Boswell Field Battle Visitors centre.

One of the only things flowering at this time is in the garden of our flats. Apparently it is a Himalayan bush hence the cold weather makes it flower. On this day I took a series of photos of our canal (Erewash Canal). Trent Lock (the canal junction with the River Trent) has two pubs, the Steamboat and Trent Lock. I have included some photos of places things and inhabitants of the canal.  I have been playing with the settings on the camera so you will see some different effects. 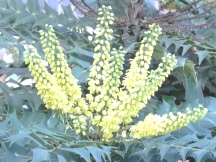 Narrow boat on the canal 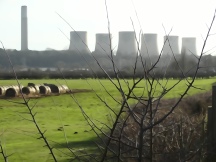 as a water colour 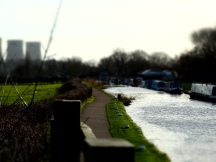 the tow path to Trent Lock 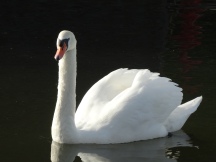 one of our swans

We have previously always walked toward Trent Locke in the east, but on a particularly nice day we walked in the opposite direction toward Langley Mill in the west. I did not take the camera because we were just going for a walk. Next time I will get some shots.

What started out as a bright cloudless day turned a bit sour when the wind lifted and with the ambient temperature hovering around 1*C the wind had a real bite.

Despite the cold, we walked for about an hour arriving in Sandiacre yet another nearby village. Kerry spotted the Red Lion Pub and wanted to warm up so we crossed the road to find it was permanently closed. There are a lot of abandoned hotels throughout these villages and this one presented an interesting building which appeared to have the old stables still in the back of the hotel. She spotted the White Lion Pub 100m up the road but I was not interested and so we turned around and walked home. There are two further locks in this section. In all the canal has 14 locks and is approximately 11 miles in length.