It has finally arrived. Saturday and our guided tour of the Derby Roundhouse.

Tony Robinson (formerly Baldrick now Sir Tony), featured this bit of Derby’s history on one of his telly shows and we were intrigued. So the following day we set off in search of it and found it just beside the Derby Rail Station and in walking distance of the Rams Stadium (Pride Park) and the new Velodrome (Derby Arena).

Unfortunately the Roundhouse is only accessible by tour and you have to book. So we went over to the Velodrome (pictures below) and found that although complete it is not open to the public til March. Beside the velodrome is the Rams home ground (the Rams are Derby’s Division 2 team in the Champions League). It also can be visited but again by appointment only, unless attending a game of course. So perhaps a wasted trip. 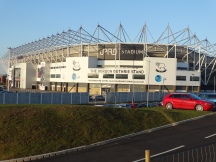 On arriving home we booked our appointment for the Round House and here it is: Saturday. The weather is mixed. When leaving home it is overcast and blustery. On arriving it starts raining and when the tour starts the sun is out but the temperature is 4C with a strong breeze so it feels like -1C. Got to love this English weather! Our tour guide is Darren and we are joined by two other tourists, one from Derby and the other from Nottingham neither of whom has visited the Round House previously.

Darren explained that the Round House is one of many built in the early 19th century following the development of the steam engine by George Stephenson in Derby. This particular building was constructed in 1839 and ceased life as a steam engine repair shop in the twentieth century. Many of its contemporary buildings have been demolished but this one was spared not for preservation but through good luck. The University of Derby has acquired the site and created a unique campus. I have set out below what is said in the website for Roundhouse Events below.

“The Roundhouse at Derby is the world’s first and oldest surviving railway roundhouse. It was originally developed in 1839 by four rival rail companies, including North Midland Railway (NMR) for whom George Stephenson and his son Robert were engineers.

Robert was responsible for the engineering of the NMR buildings on the site, including the world’s first railway roundhouse, built for the princely sum of £62,000. The Stephensons are probably even more famous as the inventors of the Rocket steam engine which was designed and built by George and Robert for the 1829 Rainhill Trials.

In 2008, the Grade II* Listed building and other associated buildings on the site were sympathetically restored and repaired using the William Morris principle of ‘honest repair’. There are also two newly-constructed buildings which have been designed to blend in with the existing structures.

A number of innovations were incorporated into the new-build construction including a ‘chameleon glass’ which changes colour depending on the light and angle of view. Naturally, the short, 12-metre engine turntable can still be found in The Roundhouse today and is just one example of the rich manufacturing and railway heritage of the site.” http://roundhouse-events.co.uk/index.php

As we toured around Darren told us that George was also famous for the invention of a miners lamp used in the mines in Newcastle. The lamps became so famous that they took his name; George Lamps. Then the miners became known by the name of their lamps; Georges. Later the whole of the population of Newcastle on Tyne became known by that name, corrupted to “Geordie”. This is one of the explanations for both a regional nickname for a person from the larger Tyneside region and the name of the distinctive Northern English dialect spoken by its inhabitants – “Geordie”.

First we visited one of the new buildings to gain an overall view of the site and to catch glimpses of the workers houses, hotel, pub and other buildings on the other side of the rail line constructed to house and provide services for the 5,000 strong work force employed at the peak of its activity. Derby University teaches vocational activities so in this building was the hairdressing teaching school. 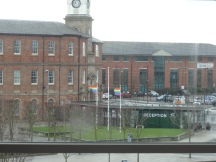 Then we went to the Engine Room which now accommodates the hospitality school and the training kitchens. Its original purpose was to maintain the locomotive engines and carriages. From there we went into the new glass panelled building and then into the Roundhouse itself. In this building 32 locomotives could be worked on at the one time. Whilst a marvel of efficiency it was a dangerous place to work with smoke, steam and close working quarters making it unsafe. 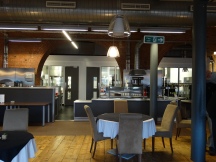 After the tour finished we went across the rail line to see the World’s first purpose built luxury hotel built for the first class passengers using the railway, the rail cottages and the rail worker’s pub. Its game day so plenty police officers in the streets and outside the pubs. We went into the New Brunswick (formerly The Railway Hotel) as it remains in the same internal layout as existed in the 19th century. Lunch was unique – the hamburger was an unbuttered bun with a meat patty – £2.60. We shared a table with a couple who are Sheffield Wednesday supporters (Derby –v- Sheffield Wednesday 3-2 Derby) and had an interesting chat – one of them had lived in Brisbane for two periods of 6 months and both thought they would like to emigrate (he had left a Sheffield Wednesday jersey at the Centenary Tavern Jindalee and wanted to go back to see it). 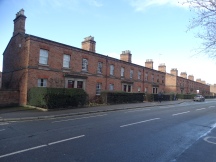 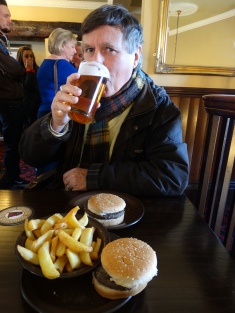 We popped into the former Midland Hotel to see what 19th century luxury looked like and then headed home before the footy crowd got too boisterous.