We have been back in the UK for 5 days now and recovered from jet lag but Kerry has caught a cold and is feeling miserable. However this Tuesday morning we awake to bright skies and warmish sun so it is time to break out of our flat and see more of the world.

We have a busy schedule coming up and we have to watch our pennies as pensioners so we pull out the 2015 edition of the National Trust Guide. We settle upon a visit to Kedleston Hall.

The guide says “Designed by the famous architect Robert Adam, the hall was built for Sir Nathaniel Curzon in 1765 as a house to rival Chatsworth. Intended as ‘a temple of the arts’ and as the location for grand entertainments, the main house was never meant to be a family home, but a canvas on which to showcase the finest paintings, sculpture and furniture.” This might be worth a look.

We load up our Thistle and 30 minutes later we arrive at the front gate with its two gatehouses either side of the road leading to the hall. Beside the entrance is the Kedelston Hall Golf Club. A sign inside the gatehouses warns that livestock will be on the road. We drive for almost a kilometre with the fairways of the golf course on our left before the house comes into view. In front of us is a magnificent bridge crossing a river, black angus cattle grazing casually on the banks of the river. To our right a strange building sits on the far bank of the river and we learn this is a ladies fishing lodge so that the fair ladies did not have to get their feet wet whilst fishing, Across the river we see sheep with their lambs skipping around dotting the grassy approach to the hall. And the back drop to this idyllic picture is the hall – you cannot miss it, it is large and grand. 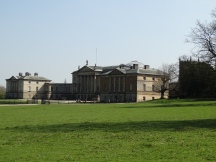 Our guide book had promised “As soon as you arrive at Kedleston Hall you are invited to take a trip back in time to the 1760s, when wealth and power enabled the creation of this magnificent neo-classical mansion and beautiful landscaped park.” We were not disappointed.

On arrival we booked to join the introductory tour and the Conservation tour. The introductory tour was held in the grand hall and we learnt about the history of the family which still resides in the hall today even though the hall is now the property of the National Trust. Kedleston Hall is the seat of the Curzon family whose name originates in Notre-Dame-de-Courson in Normandy. The family helped finance William the Conqueror and received 10,000 acres in Derbyshire as their reward.

Whilst waiting for the tours to commence we visited the family church and the crypts within. 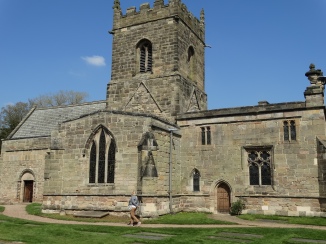 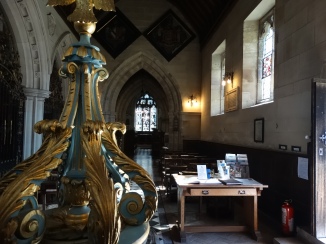 The Curzon family have owned the estate at Kedleston since at least 1297 and have lived in a succession of manor houses near to or on the site of the present Kedleston Hall. The present house was commissioned by Sir Nathaniel Curzon (later 1st Baron Scarsdale) in 1759. The family ended up with two titles, the family title of Viscount Scarsdale and the personal title of Lord Curzon (an Irish title given to by Queen Victoria to a second son of the Curzon family so he could be Viceroy of India in 1898). This is the Lord Curzon I speak about in my blog on Tattersall Castle. (Somewhere different – Lincolnshire)

Our second tour dealt with the difficulty for the National Trust to live up to its motto “Forever, For everyone”. Conservation is a knotty and costly problem full of decisions around conservation or restoration and what is important. For this part of the tour we were taken to some rooms in the top of the house (formerly the guest rooms) which had not been restored and now were used as storerooms via subsidiary stair cases which were never designed for frequent use and therefore are not structurally able to handle more than ten people at a time. The tour started in the hall beneath the grand hall where we witnessed some of the deterioration caused through use (they had five thousand visitors over Easter) and the fact that the hall does not have engineered foundations as would be done today.

Even the grand hall is deteriorating quickly because of the building technique employed. In the former guest rooms we were shown the tools of conservation and the bits and bobs which are stored there for conservation. We even found a doorway in a cupboard through which we reached another set of stairs so frail that only one person at a time could view the staircase.

The guides told us that “Soon after he inherited Kedleston in 1758, Sir Nathaniel Curzon met a young architect called Robert Adam, who had recently returned from three years study in Italy and who shared his enthusiasm for ancient Rome and the principles of classical design. Sir Nathaniel had already demolished his grandfather’s house and, while he was initially commissioned to redesign the parkland, by April 1760 Adam had sole responsibility for the design of the new Hall and its interiors.” 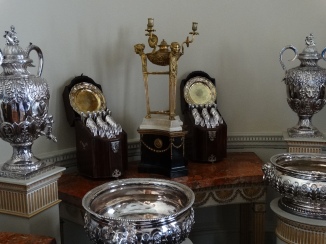 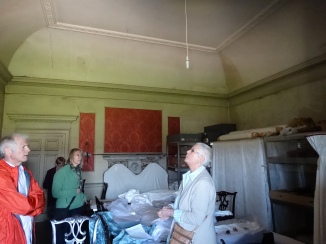 On the ground floor Lord Curzon created the Eastern Museum, displaying objects collected on his travels in Asia and while Viceroy of India (1899-1905).

The West Wing housed the servants’ quarters and kitchens (now the offices and restaurant), while the East Wing remains, as it always was, the private residence of the Curzon family. For further information here is the link to the National Trust site.

The weather had been glorious so we strolled through the park (now only 4,000 acres) taking in the sunshine. We inspected that bridge more closely, interviewed some of the lambs frolicking in the pastures and inspected the Ladies Fishing Lodge although it was fenced off preventing a close up inspection. 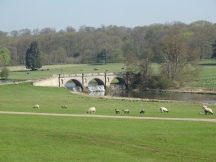 It had been chill in the morning and in the hall but by 2.00 o’clock the day had reached its full potential. And so we bid farewell to Kedelston.