Our last day in Avignon and we are going into the country to visit two nearby villages – Gordes and Rousillon.

Gordes is a commune in the Vaucluse département in the Provence-Alpes-Côte d’Azur region in south-eastern France. It is very much as it was before the Second World War and therefore interesting and quaint. On the way we spotted some poppy fields and the tourists could not help themselves – out of the car camera in hand.

The village, like so many of the villages in southern France was built on top of a hill for defensive reasons which no longer exist today but give rise to the quaintness tourists find attractive. As with all these villages the church is a central element. In many cases the church came first and the village followed. Here in Gordes it has traditional church with some regional differences like the blue ceiling above the altar and the stairs up to the organ. Unfortunately the church is showing a bit of neglect. The village had a second church which has been de sanctified and is now a modern gallery. It also has a castle which now forms the Hotel de Ville and Tourist Information Centre. 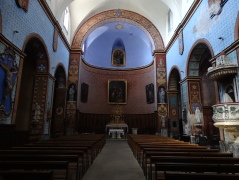 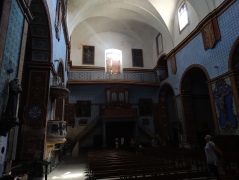 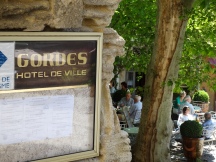 Down the road (or should I say the footpath on which they drive) from the church we found a cave. When the town fell into decline after WW2 and premises were abandoned things like underground caves were lost and forgotten. When this particular house was remodelled by its new owner he rediscovered a series of caves going back to roman times. The caves most recent use was for pressing of olives. For a small fee we were able to visit the caves. The visit started with a film presentation and then an audio tour. 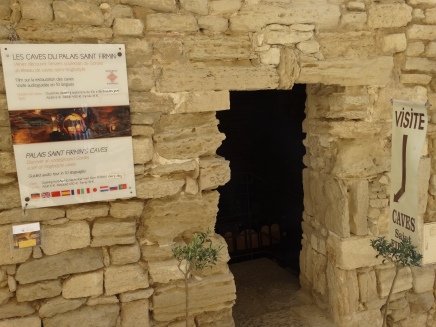 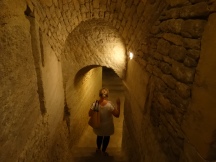 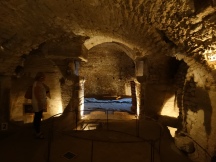 The charming mademoiselle at the caves gave us a tip as to a good place for coffee. On the way we saw more of the underground tunnels and caverns of the town. We also saw one of the residents sunning itself and of course we admired the view from the top of the hill. As we left Gordes to travel to Rousillon we were able to take some vistas of the village including the local vines and poppies. 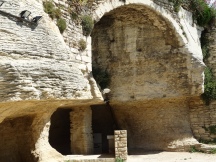 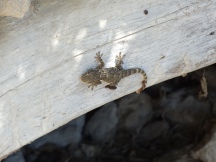 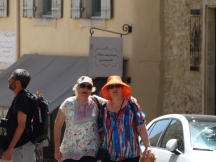 Roussillon is a commune in the Vaucluse department in the Provence-Alpes-Côte d’Azur region in south-eastern France. It is famous for its ochre deposits found in the clay surrounding the village and ochre mines. Ochres are pigments ranging from yellow and orange to red. One of the former ochre quarries can be visited via the ‘Sentier des Ocres’ (Ochre Path). On arriving at the village we embarked on the walk to see the ochre in all its shades.

The village sits atop a hill and like Gordes has a fantastic view of the valleys surrounding it. The day turned out to be rather warm so ice creams all around as we investigated life in Rousillon. Interestingly the vineyards all seemed to have poppies growing between the vines. 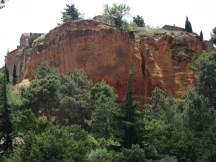 During our investigation Kerry noted that some ancient stone dwellings could be visited just 4 klms outside Rousillon. These were called “Bories” and exist in many different places usually as temporary shelters for shepherds. However in this case there was a whole social and economic system built around and based on these dwellings. A small self-sufficient settlement. They were not easy to find and once found it was difficult to think of life in such a settlement.

A path through the scrub to a group of thirty dry stone huts, now restored following ten years of work gives an example of life in rural Provence in the past. The stones, without use of mortar, have been skilfully stacked into huts with corbelled vault ceilings. The huts give an austere and harsh appearance.

The Bories village is composed of seven groupings of huts, each having a very precise function. There are houses, stables, sheepfolds, barns, grain lofts, silkworm factories and bakehouses, vat houses and tanning mills, henhouses, pig sties and goat shelters. Preservation of the Bories

Attempts at dating the bories have been made and they may originate as far back as the Bronze Age. But it is more likely due to the remains found in and around the village that it would have been constructed around the 7th century. There are objects and money found on the site suggesting it could not have been built prior to the 15th century and other remains, such as the pottery, date from the 18th century.

One thing is for certain they could have used some outdoor shelters as the afternoon sun baked the ground and heated the rocky shelves on which the bories are built. 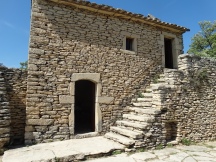 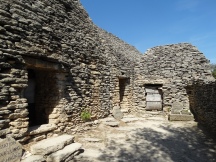 By late afternoon we were hot and dry. Retreating to the car we broke into the water bottles to quench our thirst and they remained with us on the drive home. A very satisfying if arduous day climbing hill top villages and negotiating the rubble around the bories.