We discovered that we did not have any maps in our GPS for Austria or Germany. Alarm bells! What were we to do, we were half way to Salzburg and our host was expecting us at 15.00. We also realised that we had not experienced a German speaking country before. We decided that in respect of the GPS we would do it the old fashioned way and buy a map, and in respect of the language we would play dumb (which we were) and hope to find English speakers.

The road to Austria and through Austria has some of the most spectacular scenery we had seen so far. High mountains followed us throughout the day. Large castles appeared among the villages springing up throughout the valleys and sometimes perched precariously on the mountains. The .weather was threatening rain most of the day but the scenery made up for it. We even passed through the Dolomites which are a mountain range located in north eastern Italy. They form a part of the Southern Limestone Alps. The name “Dolomites” is derived from the famous French mineralogist Déodat Gratet de Dolomieu who was the first to describe the rock, dolomite, a type of carbonate rock which is responsible for the characteristic shapes and colour of these mountains. 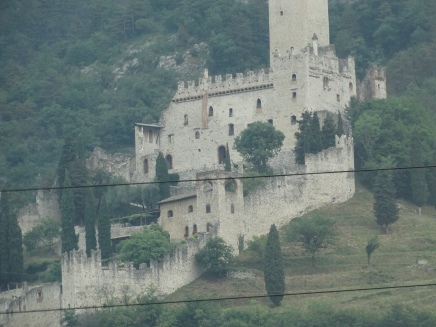 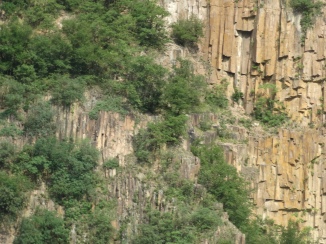 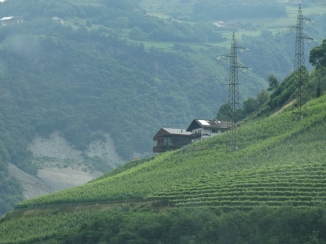 Before entering Austria we called in at a services area to get our map. By now we were satisfied that the cord for Kerry’s IPhone was broken as her phone was not charging so when we bought the book of maps we also bought a new cord. 45€ later we were walking out of the service station office when I notice a sign in Italian with the Austrian two headed eagle on it and other ominous looking words and so I thought I better enquire. It turns out Austria has a road tax and before entering the country you need to buy and display a vignette. Of course the servo sold them and a ten day pass cost 9€.

Well with Kerry’s phone recharging we realised that we could use it for directions so the book of maps was unnecessary. Then we realised that it was not Kerry’s cord but the power outlet in the car – the fuse had blown for our auxiliary outlets on which we ran the phone and the fridge. Just one of those days.

We also encountered an extraordinary number of tunnels and bridges; too many to count although I think I got up to 28 tunnels before losing count. 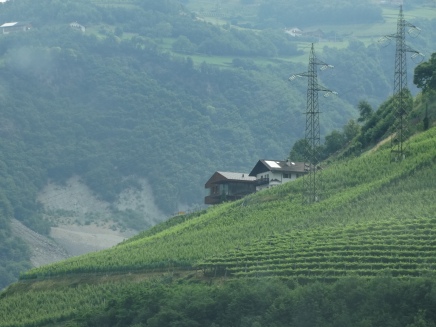 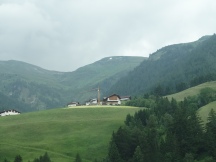 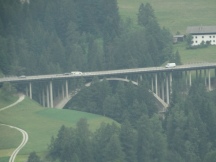 Well when we finally arrived we were dismayed. The house was surrounded by scaffold (my picture is of the back of the house which is more flattering). Petra the owner was quickly at the front door and showed us inside speaking very good English. She explained that she and her father were renovating whenever she had the money to do some more, but the flat we were renting was complete on the inside. It certainly was and had every comfort. She gave us a run down on the buses and other things and then showed us her part of the house inviting us to call if we needed anything. So we unpacked and headed for town. As we walked to the bus we noticed a huge castle on a nearby hill which turned out to be Hohensalzburg in the centre of Salzburg. We passed a red phone box which had been converted into a community borrowing library, passed over a canal and noted that Austrian houses had a distinct Swiss appearance or vice a versa.

Not much else happened that first day but as the photos show we were in Salzburg.