Having said farewell to the Worrells we continued our discovery of Prague with a visit to Karlštejn Castle. Our day started with catching a bus for an hour long drive through the country past the new ring road around Prague and out into the countryside. 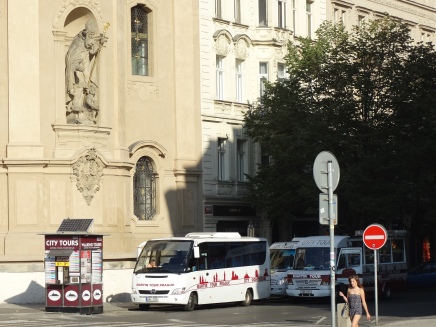 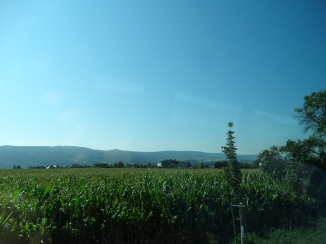 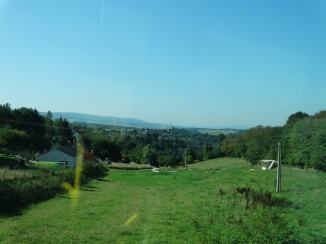 Karlštejn Castle is a large Gothic castle founded 1348 AD by Charles IV, Holy Roman Emperor-elect and King of Bohemia. The castle served as a place for safekeeping the Imperial Regalia as well as the Bohemian/Czech crown jewels, holy relics, and other royal treasures. Located about 30 km southwest of Prague above the village of the same name, it is one of the most famous and most frequently visited castles in the Czech Republic.

Founded in 1348, the construction works and interior decoration were supervised the Holy Roman Emperor Charles IV personally. Construction was finished nearly twenty years later in 1365 when the “heart” of the treasury – the Chapel of the Holy Cross situated in the Great tower – was consecrated.

Following the outbreak of the Hussite Wars, the Imperial Regalia were evacuated in 1421 and brought via Hungary to Nuremberg. Later, the Bohemian crown jewels were moved to the castle and were kept there for almost two centuries, with some short breaks. The castle underwent several reconstructions: in late Gothic style after 1480, in Renaissance style in the last quarter of the 16th century. During the Thirty Years’ War in 1619, the coronation jewels and the archive were brought to Prague, and in 1620 the castle was turned over to Ferdinand II, Holy Roman Emperor. After having been conquered in 1648 by Swedes, it fell in disrepair. Finally, a neo-Gothic reconstruction was carried out by Josef Mocker between 1887 and 1899, giving the castle its present look. The nearby village was founded during the construction of the castle and bears its name.

The core of the castle consisted of three parts placed on three levels-differentiated terraces; every level express different importance. On the lowest terrace there stood the Imperial Palace, above it there was the Marian Tower and the Big Tower stood the highest. The emperor inhabited the second floor of the palace; the floor was divided into four rooms by self-supporting partitions. A spiral staircase connected it with the third floor in which – according to the record from the 16th century – there was a residence of the “empress with her female retinue”.

The central area of the 60m high and separately fortified (4–7,5 m thick walls) Big Tower is the Chapel of the Holy Cross; it has no analogy in concept elsewhere in the world. In the safety of the chapel, behind four doors with nineteen locks to each key was guarded independently, the valuable documents of the state archive were kept along with the symbols of the state power – the Imperial Regalia, later the Czech Crown Jewels.

The Well Tower, being the logistical centre piece the castle could not function without, was the first part of the castle to be built. Miners were brought in from the mining town of Kutná Hora, however, water was not encountered even after the depth of the well was 70 meters, well below the level of the Berounka River. An underground channel was therefore excavated to bring in water from near by stream, yielding a water column of 25 meters, sufficient to last for several months. The reservoir had to be manually refilled roughly twice a year by opening a floodgate. Considering the significant strategic weakness incurred to the castle by the lack of an independent water source, the existence of the underground channel was a state secret known only to the Emperor himself, and the burgrave. The only other persons aware of its existence were the miners, who were however allegedly massacred on their way from the castle after the construction, leaving no survivors.

Our bus dropped us at the bottom of the hill and we chose the taxi ride up to the castle. Good choice on a hot day. After leaving the cab we walked up through one of the three gatehouses into the courtyard. We visited the Well Tower whilst waiting for the tour to start. We almost lost Kerry. 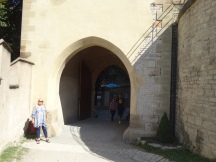 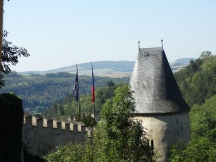 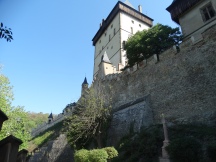 We commenced our tour at the second gate house. I did not purchase the necessary photography licence so I could only take photos of the exterior parts. Someone with a hidden IPhone got some shots but I don’t know if she will share.

Of course she did share and here they are starting with the interior of Charles private boudoir, the playing cards believed to have been used by him, his bed (or at least a copy of it), a wall of timber panelling typical of the panelling that was once throughout the castle, typical door, a display of typical furniture and implements from Charles period, a cross created in rare jewels and the copies of the two crowns one for the Holy Roman Empire and the other for the King of Bohemia.

After the tour we walked back to our bus through the village where we saw the castle as it would be viewed by an invader. It dominates the village and provides a lovely backdrop whilst we sat in a local restaurant for lunch.