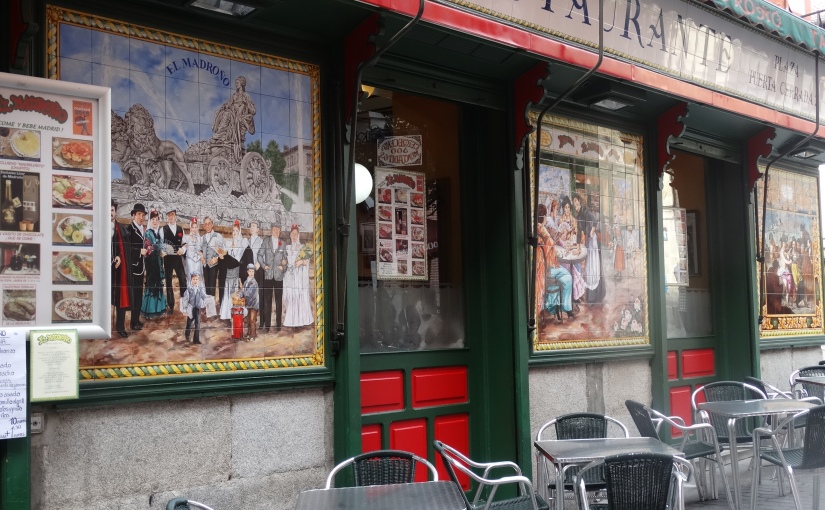 Time for our Tapas tour draws near. We caught the metro and travelled back to Opera and wandered up Calle Arenal; a pedestrianised mall full of tourists. There are plenty of tapas bars and they all seem to have ham on the bone (pigs legs) hanging in the cafe. Not all shops were as innovative as the “pop up” shop here in the mall – a local carver had set up shop with minimum cost. Then there is the chocolate biscuit that is popular in Madrid – chorros, a long biscuit type of thing and a thick flowing chocolate that you dip and eat with the biscuit. We found one place where the customers were lined out the door.

Six o’clock rolled around and this is tour time. We met Enrique our guide at the information office. There was only one other couple for this tour so it was like a personalised tour. Enrique looked and spoke like a Spanish guerrilla; wooly beard and so passionate about his Madrid and its traditions and its food you could imagine him over turning the tables in the Tapas bar that charged tourists for tapas. For Enrique, tapas was a tradition started by King Alfonso IV following a bout of illness where the cure prescribed was 6 glasses of red wine per day with a little to eat with each glass. The King recovered and passed a law that all Castilians should do the same. Whilst it is no longer law the tradition remains – you drink wine or beer and have a little food with the beverage. The word “tapas” comes for the habit of placing the plate with food over the drink to stop insects from getting into the drink – “tapa” a top for the drink.

Enrique showed us that Madrid is protecting its history – shops that have traded for more than a century are identified by a plaque in the footpath and the locals are encouraged to support the local traders so you find shops that are still trading more than 100 years later like this butchers shop which is now more of a general corner shop but is still run by the same family – Los Ferreros.

We moved onto sample our first tapas – a glass of wine some olive oil and bread and some calamari rings with bread. The he showed us where to go for codfish cakes – Revuelta (they are a favourite with the Spanish the same as the Portuguese and use the same salted cod) and codfish cakes and jam made out of a local citrus that is also used to make a liqueur – El Modrono (the tree is called modrono or strawberry tree). Then we went to another restaurant which seemed to have the same name but was decorated in pictures made of tiles. Here we tried the Modrono liqueur in cones lined with chocolate so you ate your “glass” after drinking the liqueur. In fact it was called Taverna El Modrono. 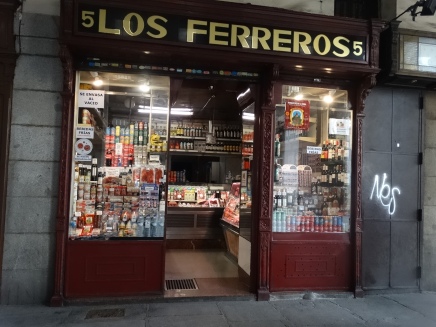 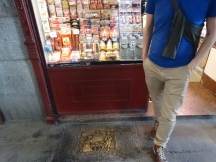 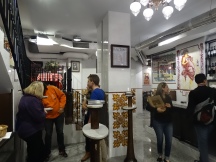 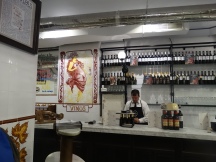 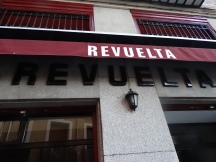 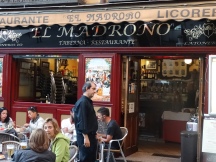 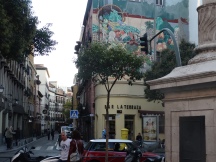 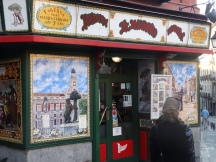 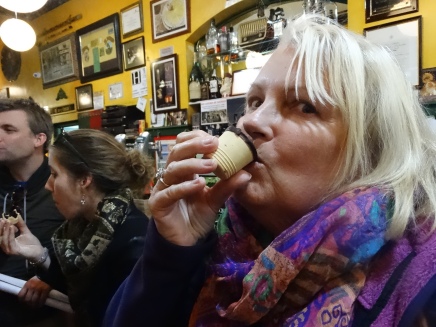 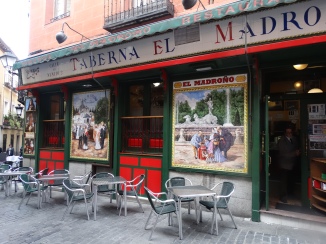 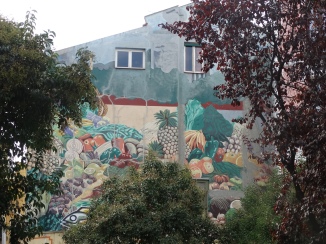 Across the road, and 30 m up the road we stood in front of the oldest restaurant in the world according to the Guinness Book of Records (there is a certificate in the window to prove it). Our guide Enrique used his influence to get us inside to view the wood fired stove that has been turning out suckling pigs since 1725 to view the cellar which I think was last dusted in 1725 and generally view this living bit of history.

Sobrino de Botin founded in 1725, is the oldest restaurant still running in the world. The artist Francisco de Goya worked there as a waiter while waiting to get accepted into the Royal Academy of Fine Arts. The restaurant was founded by a French man Jean Botin and his spouse, and was originally called Casa Botín. It was inherited by a nephew of theirs called Candido Remis, thus explaining the change of name to Sobrino de Botín, which survives to this day. The Sobrino and its speciality of roast suckling pig are mentioned in the closing pages of Ernest Hemingway’s novel, “The Sun Also Rises”. Its other signature dish is an egg, poached in chicken broth, and laced with sherry and garlic: a favourite pick-me-up with Madrileño revellers.

Then Enrique took us to the San Miguel Mercado or Market to show us the seafood and the tourists in the market. His point was to avoid this place at all costs and seek out the local traders for better value and less chaos. After the visit to the markets Enrique took us to another restaurant where we had pig’s blood sandwiches and a glass of wine – not so impressed but we had the chance to chat with our Dutch friends after Enrique had taken his leave. An excellent night which has led to other adventures.