Our daughter Carly has created the event “Brisbane Fashion Month” to highlight fashion in and from the Sunshine State but in doing so has created a rod for her parents back and that is where grandparents become invaluable. Whether it is providing support with the project or support for her family, Kerry has ensured we were there.

This, believe it or not, explains why we were in Los Angeles babysitting. Carly and Vincent have moved to LA as part of Vincent’s career with Boeing, but you cannot host Brisbane Fashion Month from LA. So, for most of October, we have been living in LA grandparenting.

Now Carly and Vincent live in a pretty smick town called Irvine in Orange County. The town is a recent creation of urban sprawl (1970’s I believe). Wikipedia says “Irvine is an affluent city in Orange County, California, United States. It is a planned city; the Irvine Company started developing the area in the 1960s. Formally incorporated on December 28, 1971, the 66-square-mile (170 km2) city had a population of 212,375 as of the 2010 census; in 2016 the city’s population was 258,386.” Originally it was to be a planned city of 50,000 people around the University of California, but the fall of Saigon led to a large influx of Vietnamese and Asian immigrants.”

So, our days have been predictable and ordinary – rise about 6.00am, make breakfast and school lunches, walk the kids to school (they ride their scooters which we then carry home – 20 minutes there and back), go to school pick up the kids, go to the park for a picnic, then walk home (again the kids ride their scooters), homework, clean the lunch boxes, make the evening meal and go to bed (weather and other exceptions occurring to change the routine). On our first weekend in Irvine, we visited the Halloween function in the park. Hot dry and boring is all I can say to describe the afternoon. These pictures will give you an idea.

Our grandchildren William and Mathis dressed up for the occasion only to find themselves sweltering. The organisers controlled the crowds by issuing tickets for specified times so crowds were not a problem. But southern California was about to go through a week of sweltering weather. There were clowns and acrobats, cops on Segway, playgrounds Halloween pumpkins to select and incongruously some early war planes. We only lasted an hour before taking our pumpkins and running.

The following weekend, we had a three-day exception to our routing with a visit to Disneyland and California Park. We stayed outside of the parks and had a ten minute walk each day to the park and return which proved very taxing on the 3rd day with temperature in the 40s in the afternoon. The crowds were average, so we were not stuck in interminable queues and Vincent’s knowledge of the tricks around the parks made life easier. The kids loved all three days and particularly the hotel room with their bed in front of the TV.

Day one was the traditional Disneyland. The crowds were larger and the queues longer but we got to experience many of the rides, but William and Mathis were not familiar with the stories behind the rides.

Days 2 and 3 California Park (the parks are face to face). This is the modern park including Cars and A Bugs life and Star Wars. Far more meaning for the boys. The Halloween theme continued into the park and we to the Cars part of the park. 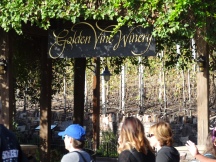 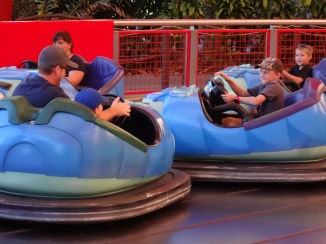 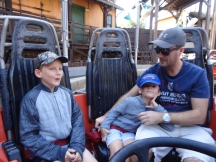 It pays to buy your Disney pass on line, use the fast track system and plan your rides. You can also take your own supplies of water and snacks. But the rides can be dangerous – I lost my Akubra on the Grissley River Ride and I am still waiting for Disney to post the remains to me. And at night it changes to a wonderland.