Well we made it. Returned the car to the airport stayed overnight at a new airport hotel and caught that bloody early flight to arrive in New Orleans and travel to our hotel in St Charles St. A city of jazz legend and mixed cultures of French/Spanish/American cultures visible in its architecture and its people. Our hotel in St Charles St is part of the Wyndham Group and has a pleasant old world New Orleans feel to it. It is only a one bedroom apartment so this time it was our turn on the settee.

St Charles St is one of the longest streets in NOLA (better get used to it – New Orleans Louisiana) and has a tram line running up the centre all the way to Bourbon St and out to City Park and the city cemeteries. You can see it from our apartment window. After registering and dumping our gear in the room we explored nearby and took a walk to Walgreen’s Chemist to purchase a tram pass for the next 3 days. In doing so we discovered the Avenue Pub – a local hangout in a building dating back to late 1800s and in some respects was probably unchanged.The exterior reflected the French influence of the earliest settlers and the pressed metal ceiling on the interior reflected its age. Despite the surrounding the offering was of considerable variety. David and I sampled local craft beers – the pub owner had inherited it when her father died and she moved out to NOLA to sell it but stayed and has won a number of awards as the best venue for craft beers. Kerry and Ron played it safe with a Pimms or so they thought. The local variety of Pimms here is mixed with Ginger Beer, horrifying Kerry but I did not hear too much complaint from Ron.

Having quenched our thirst we continued the sight seeing looking for Walgreens. From the Avenue we could take in the full effect of our hotel, the local Baptist Church and its neighbouring properties, which continued the architecture of NOLA. There is also a steel construction of a surprising kind. It was once a restaurant on the top tier of the Eiffel Tower. Unfortunately, the restaurant was too heavy and was causing damage to the tower floor resulting in it be dismantled and abandoned in 1981 and purchased for the NOLA Worlds Fair in 1984. It was not a success there either and ended up here in St Charles Ave where it remains an unsuccessful restaurant. 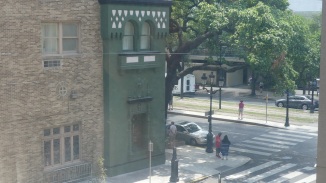 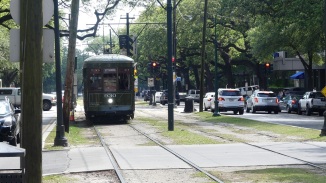 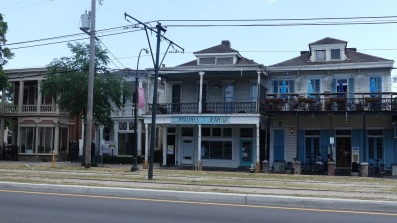 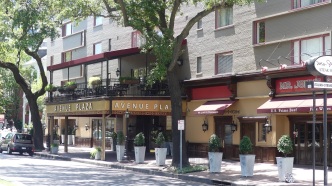 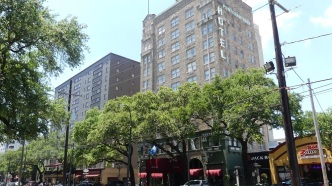 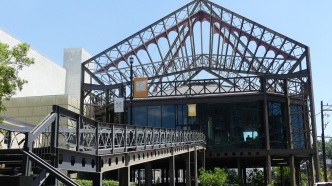 We purchased our 3 day passes (which were in expensive and enabled us to visit most parts of the town) in order to travel to the docks of the Mississippi. We had booked to dine on the steamboat Natchez (yes, a steamboat powered by a diesel fuelled steam engine). Uncertain of the travelling times we arrive 1 hour too early and decided to have a walk on the waterfront. Audubon’s Aquarium of the Americas was the first thing to greet us. The walk would be about 1 mile long, and we passed some interesting monuments including 1 to the “Immigrants”. We were still too early to board so we took a tram down to the French Quarter which as its name suggests it was the market place for the French when Louisiana was a French overseas colony. Nowadays it is a haunt for tourists and the junk they like to peddle to tourists so we moved quickly through this area up to Café du Monde where they serve the famous New Orleans beignet – a deep fried donut like cake smothered in icing sugar. We did not have time on this occasion to stop but we were able to take in some of the street scenes that are typical of NOLA including the Catholic church facing Jackson Square. 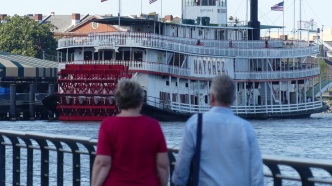 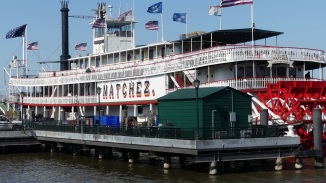 We returned in time to join the queue thronging to board the Natchez. Once on board they sat us down straight away to feast on the smorgasbord (the dinner is divided into two sittings and we chose the first sitting so that we could enjoy the sights and our meal). After dining (pretty average offering except for the desserts – bread pudding and bananas forster) we settled back to enjoy the cruise.  With New Orleans being over 100 miles from the mouth of the Mississippi we travelled generally south sissippi Riverviewing the industry along the river and learning about the need for levies along the banks. One of the more interesting sights was the two “RORO” (Roll on roll off) ships moored in the river. These are emergency US Navy transports on call 24 hours a day able to load and unload from the rear of the vessel in all conditions.

We passed the competition the Creole Queen (an imitation paddle steamer – diesel and screw propulsion), the national guard HQ for New Orleans and various other deep-water sea going freighters (the river is over 200 feet deep at this reach). We were also able to visit the engine room and view the boilers “Thelma and Louise” and view the pistons driving the paddle wheel. There was a beautiful sunset this evening and some dazzling lights from the Creole Queen, downtown New Orleans and the bridge over the Mississippi to cap off the day. 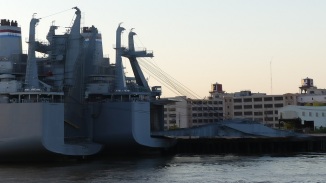 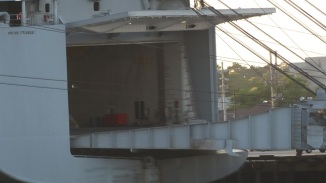