Our trip by bus to Nottingham was part of the nostalgia of this entire trip. Whilst living in the UK we travelled the M1 by bus from Nottingham to London frequently even though we had Thistle (our car). For me watching the familiar countryside slip by was a cathartic feeling I had returned to somewhere where we had both been content.

Arriving at Nottingham and we made our way to Attenborough where Cilla and Bob have lived and raised their family. Bob is a retired Professor formerly working at Nottingham University in human genes and biology and Cilla a retired physiotherapist. Cilla has an interest in Leprosy and supports a foundation aiding people afflicted and seeking a cure. Hence upon arrival we had great joy in assisting in setting up a garden party in their back yard in aid of the Leprosy Foundation. Leprosy remains a problem in Niger Africa.

Saturday morning and its all happening. Ladies dropping in the cakes for the cakes stall, Michelle (another gardener from the church) dropping in with masses of plants for the plant stall and Kerry and me assisting where needed (me assisting on the BBQ doing bacon butties) and Kerry aiding in the kitchen. All the neighbours and other people from throughout the village attend with 77 people attending in all (the head count courtesy of a door prize raffle setup by me) and takings from sales raffles etc and donations in excess of 1,000 pounds to be donated to the Leprosy Foundation. This is something they do every year to help. 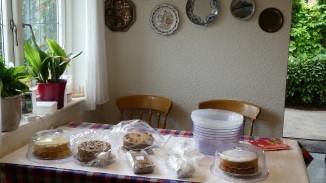 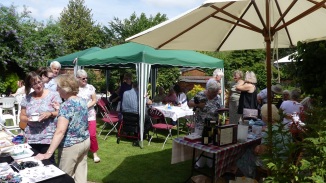 After assisting cleaning up we made our way by bus into Nottingham to meet up with Martin and Christine our fellow travellers on the Rhine in 2015. Martin is a former MP in the Army and was stationed for a period in Germany and else where and has a deprecating sense of humour and a thirst for a lager (two hands and only one mouth). We have stayed in touch visiting them in Manchester last time we were over that way and they made the trip to Nottingham (we haven’t been here before) to see us. We met at the Ye Ole Trip to Jerusalem a pub claiming to be established in 1172AD and the oldest in Britain ( a claim challenged by Martin who says he has drunk in pubs of much greater age but cannot remember where). It was as usual very busy but we battled through and made “friends” with a bunch of young blokes taking their friend for a buck adventure dressed in a pink chiffon dress and tiara. He got too close to me at one stage.

We moved on from there to another pub up the road and across the canal in brilliant sunshine unusual for Britain and then another pub for an evening meal. Both Nottinghamshire and Derbyshire are blessed with narrow boat canals from the Industrial Revolution when all cargo went by canal to the ports. Whilst the meal disappointed the company was grand and we parted promising to catch up again and keep in touch. Since returning home we have pledged to meet again on the Rhine in 2020.

Returning to Attenborough we noticed that one of the marquees remained standing in the back yard. Bob had invited Roger and Joan and Sue around for lunch the following day. We had met Roger, Joan and Sue at the Leprosy fund raiser and they were coming back to help with the leftovers. Not really although the menu included sausages from the BBQ. I am not sure how many bottles of wine (Roger is ex-military also) were consumed but Bob found himself needing a rest after lunch. So we finished cleaning up and packing away the marquee and still the sun shined. 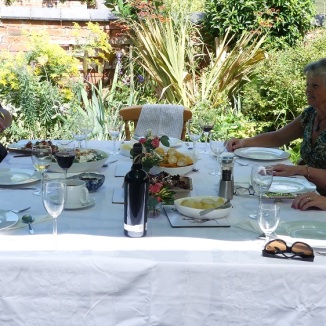 We continued to click with Bob and Cilla and they offered to take us for a country drive to a pub for lunch the next day. They had chosen a remote pub in the Derby dales out past Eyam. The pub a former something converted to its present use sits on a ridge overlooking the valley below. On the way we travelled to Monsal Head where we could see a former rail bridge and line now converted to a bike and walking path through the hills. 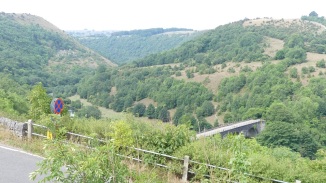 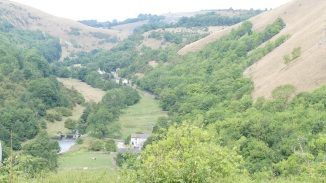 We drove from Monsal Head to Tideswell.

In the Middle Ages, Tideswell was a market town known for lead mining. The Tideswell lead miners were renowned for their strength and were much prized by the military authorities. The Domesday Book of 1086 lists TIDESUUELLE as the King’s land in the charge of William Peverel with fewer than five households.

Tideswell is now best known for its 14th-century parish church, the Church of St John the Baptist, known as the “Cathedral of the Peak”, which contains three 15th-century misericords. A sundial lies in the churchyard; it is positioned on steps which local historian Neville T. Sharpe thinks likely to be those of the village’s market cross. A market and two-day fair were granted to the village in 1251. The Foljambe family, later the Foljambe baronets, were the principal landowners from the fourteenth to the eighteenth centuries. The tomb of Sir Thurstan de Bower and Lady Margaret lie in the chapel. 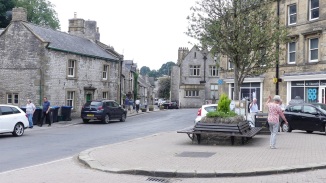 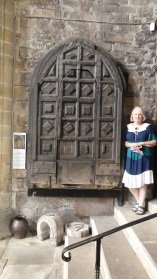 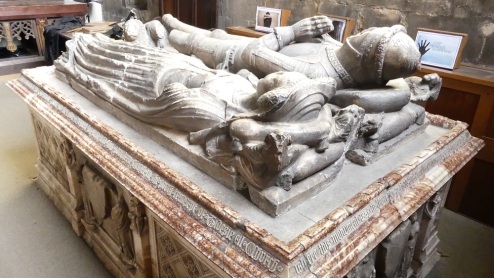 From Tideswell we moved onto The Barrel Inn, a traditional Derbyshire country inn, dating back to 1597 and stands at the head of Bretton Clough, in the heart of the Peak District.

Being one of only five properties in this small hamlet, on a table of land some 1300 feet above sea level, The Barrel Inn claims to be the highest pub in Derbyshire. It has panoramic views of the majestic Hope Valley and the Peak District National Park. Old worldly charm – peaceful oak-beamed bar, real log fires, flagstone floors, studded doors in low doorways, beamed ceilings and polished copper and brass – have all been retained to enhance the overall charm and friendliness of the Inn. 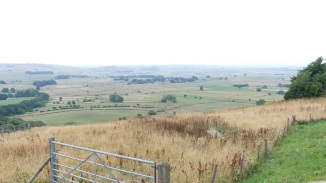 Lunch was very pleasant and again Kerry and I found it difficult to resist the draw to once again return to live in Derbyshire.

Kerry had been trying to find some 3 ply wool for a shawl she had started and she had been unable to obtain it in Brisbane or at the wool shop at Chillwell nor at John Lewis in Nottingham so Bob made his way through the Dales to Buxton where Kerry had purchased the wool some 2 and 1/2 years ago. Buxton is an old Victorian spa town and often very busy with traffic. So whilst Bob and I caused a traffic jam Kerry and Cilla ran to the wool shop and purchased the necessary wool. An excellent day.

We also had time to visit Long Eaton and our old neighbour Pam Fowler. One of the memorable things about Long Eaton was the public gardens throughout the village. Here the Union Jack is proudly displayed in flowers and garden beds blooming line the streets and roundabouts. 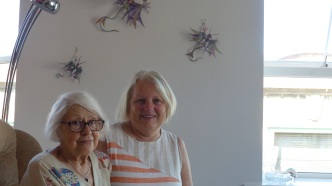 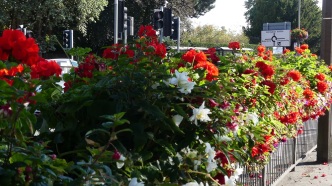 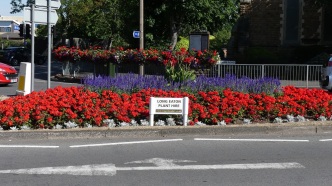 Our time with Bob and Cilla was coming to an end but we had to visit the church. It was Tuesday the coffee morning at the Church, but the old crowd was not there. Trevor master of the kettle has passed on and Sue his widow (at the garden party) continues to work at the church but apart from Cilla, Sue and Michelle none of the old crowd were there. We visited the new memorial to the victims of the Chillwell munitions explosion from WW1 something that is still raw with some members of the community.

We had wanted to catch the bus to East Midlands Airport but Bob and Cilla would not have it and drove us to the drop off at the newly refurbished airport. Regretfully our nostalgic return had come to an end and who knows if we will ever have the opportunity to return.