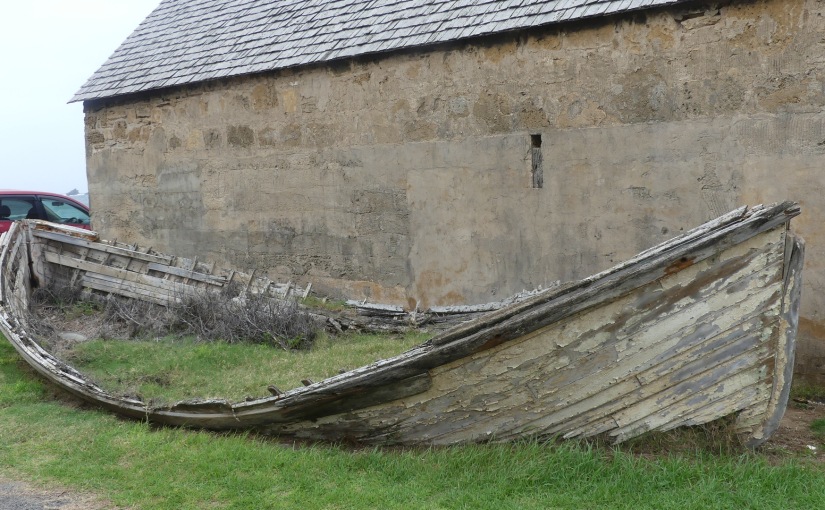 Having visited Colleen McCullough’s home and confirming that she was buried in the cemetery at Kingston, we thought we had better go and look again because we had missed it. It did not take long to find it when we knew that it was supposed to be there. A rather underwhelming headstone for probably the most internationally famous person on the Island but perhaps says something of the person or that her husband was a cheap arse and didn’t want to pay for anything elaborate or they wanted to avoid fans flocking to the cemetery or …. I could go on, but I won’t. We don’t know why, and it probably doesn’t matter to Colleen one bit. However, we did find the elaborate headstone for a local entertainer no one outside of Norfolk has heard of and good for him in death he has made his mark.

While we were down in Kingston, we thought we may as well investigate the ruins of the second settlement. And there were plenty of ruins. Traditional long boats, usually towed by motorised launches lie about some beyond repair. These are the boats used top unload cargo from visiting cargo ships that are visiting less and less. There are two jetties one on the southern side and the other on the north and neither big enough or in water deep enough to receive containerized ships and the world of loading into tenders is fast disappearing. Wild weather also prevents the delivery of cargo, so it is not surprising that the shelves in the supermarket are very scant of product.

Kingston and its relic buildings are to be found around the southern jetty. You can see the fringing reefs and understand why no ships of any size want to try and unload or load cargo here. Thank God for the aerodrome otherwise the Island would have to become self-sustaining. I have pictured some of the buildings and the reefs and rock shelves that are a barrier to big vessels.

Although the introductory tour had taken us to the northern jetty Cascade Pier we wanted to go back now that we had a better understanding of the operations of the pier. It is due north along Middlegate Road past the school and down Cascade Road to an open bay with far less natural shelter than Kingston Pier. From the conversations with locals we knew the Australian Government had at the islanders request extended the pier and fitted the large blue crane and the smaller boat crane to the pier but they all complained they installed the crane the wrong way round with the larger crane being almost useless in its present position. From what I could see on an average day with a strong wind and drizzly rain the whole pier was useless. We later found the point where petroleum products we offloaded and what a difference in strategy and design suggesting they really want the petrol but not so much anything else.

The only remanent I could see of the old whaling station is the rusted boiler you can see in my photos above. Beside them is some more Australian taxpayers’ largesse in the form of ferries to bring the cruise passengers ashore but where are the cruise liners?

We had booked a tour called “Tastes of Norfolk” where we visit a farm or two and try the local produce. Well there was some excuse about the farms not able to be visited so we were going to the Sunset Bar where we would have a chat eat some food from their kitchen and drink some grog. Actually, that is probably a fairer representation of the locals than of the “Tastes of Norfolk” and its farms. However, we did get to visit the Beehives of a local beekeeper. All aboard the bus and up the road to the Hundred Acre Reserve and just beside the reserve is the home of the bus driver who took us to Colleen McCullough’s house, and he has a few hives and he gives us a talk about beekeeping, his fruit trees his ducks – you get the feeling this tour business is a home industry.

The final leg of the tour is the green banana cooking. Back on the bus we drive to another home and there on the verandah is a propane burner and some green bananas a young lass clearly of Tahitian extraction and the local Norfolk Is cookbook of all the secret recipes. So we learned that you grate the green bananas make a batter and mix spoonsful in the batter and drop them into the propane heated boiling oil and voila green banana fritters. After this we return to Baunti base and head for home exhausted from so much activity. We will have to prepare ourselves for the famous Fish Fry tonight.

We had an afternoon siesta back in the bedroom of our apartment before heading back to Taylor’s Road HQ of Pine Tree tours where we catch buses to Ona Cliffe once again. Whilst at the booking office we are told about a change of plans. Tomorrow we go on a cliff top walk to the Captain Cook monument near Moo-oo Stone. Not anymore, the wet weather has forced the cancellation, but we will have a walk in the Hundred Acres reserve, breakfast at Ona Cliffe and bus it to the memorial.

So off we head for the fish fry. The photos of the bedroom and the fish fry are below but there is nothing good to say about the fish or the fry but the sunset was interesting.