Our trip from Inverness ended in Oban on the west side of Scotland (once again travelling from East to West). Oban is famous for the whisky of the same name. I had signed Doug and I up for a tour of the distillery. The girls were going to see the sights of Oban.

It seems an obvious question which came first the town or the distillery. Here I have to rely on Wikipedia which says:

“The site where Oban now stands has been used by humans since at least Mesolithic times, as evidenced by archaeological remains of cave dwellers found in the town.” But then it reports that the distillery was built in 1794 and the modern town formed around it.

Oban distillery is owned by Diageo. It has only two pot stills, making it one of the smallest in Scotland, producing a whisky that they describe as having a “West Highland” flavour that falls between the dry, smoky style of the Scottish islands and the lighter, sweeter malts of the Highlands. On the taste chart it falls almost smack in the middle. 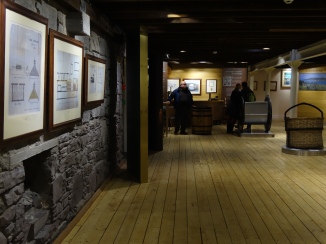 Because it is winter (well almost) very few tourists were present. Our group of 7 was made up of us, a young French couple and three Italians two of whom now live in Glasgow and one of whom worked for the Malting council (so she was there on work – or so she said). The Oban Distillery is primarily known for its 14-year-old malt, which is marketed as part of Diageo’s “Classic Malts Selection” range, and a “Distiller’s Edition” bottling, which is finished in a Montilla Fino sherry cask before bottling. There is also an 18-year-old limited edition and a rare 32-year-old edition.

Once we entered the tour NO PHOTOS ALLOWED. The tour commenced with a video presentation on the malting process (all of which is done off site due to space), then we  went to the mixing vats to observe the result of adding water to the malted and roasted and crushed barley and then brewers yeast. This is refined in the wash back to remove any remaining grain and sediment before passing through the liquor cabinet for the mid cut of the alcohol is taken off to be distilled. Then the brew is taken off site to be pumped into American white oak bourbon barrels where it is matured for 14 years. 99% of the whisky produced is bottled as a single malt with 1% going into sherry casks for a further 6 months to create the Distiller’s Edition.

On the tour we stopped to test the brew age 11 years and 58.2% alcohol by volume. Very nice and we got to keep our tasting glass. Then we passed through to the tasting room where we tried the finished product. 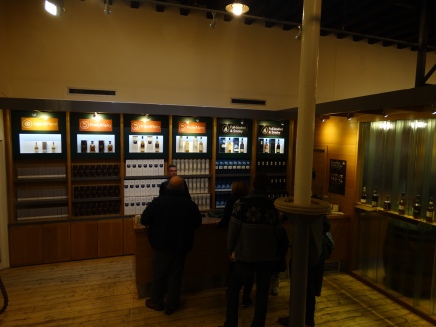 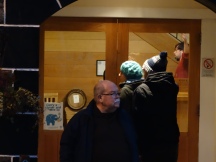 A nice ending to the tour. However our hotel was not as close as we had expected and our trip through the dark foggy late afternoon along narrow highland roads proved trying.