Haddon Hall is an English country house on the River Wye at Bakewell, Derbyshire, one of the seats of the Duke of Rutland. It is currently occupied by Lord Edward Manners (brother of the current Duke) and his family. In form a medieval manor house, it has been described (in Wikipedia) as the most complete and most interesting house of its period. The origins of the hall date to the 11th century. The current medieval and Tudor hall includes additions added at various stages between the 13th and the 17th centuries.

The Vernon family acquired the Manor of Nether Haddon by a 13th-century marriage. Dorothy Vernon, the daughter and heiress of Sir George Vernon, married John Manners, the second son of Thomas Manners, 1st Earl of Rutland, in 1563. A legend grew up in the 19th century that Dorothy and Manners eloped. The legend has been made into novels, dramatizations and other works of fiction. She nevertheless inherited the Hall, and their grandson, also John Manners, inherited the Earldom in 1641 from a distant cousin. His son, another John Manners, was made 1st Duke of Rutland in 1703. In the 20th century, another John Manners, 9th Duke of Rutland, made a life’s work of restoring the hall.

Our visit started on an indifferent day as we travelled up the M1 to Chesterfield and past the Oasis Café (this is a café in a layby on the side of the road with porta potty dunnies but from the advertising you would expect an oasis) and on through Bakewell. Now our Tommy had a different idea on how to get there and unexpectedly told us to turn right into a rural lane headed up a wooded hill. We were travelling over a rough dirt track rutted from water with exposed rocks and questioning if Tommy knew where the hell it was taking us. The rain started to fall, the road deteriorated and we agreed that Tommy had been smoking something weird when an old Land Rover came over the hill rocking and rolling along the path. We hailed the driver who pulled up beside us. He was a local farmer very amused that we were well off track trying to find the Hall. He gave us directions which meant we had to turn around and go down the hill. Not good for our Thistle.

Once back on track we made our way to the carpark which is across a busy road from the original gatehouse. Once you pass through the gatehouse the grand old house appears before you. You cross over the bridge (of course it has its own watercourse in the front yard) and walk up the hill (it is a fortified manor house) in through the large gate in the house walls. On the way you pass the gate keeper’s house with the topiary in the front yard in the shape of a boars head the heraldic symbol from the Manners coat of arms. 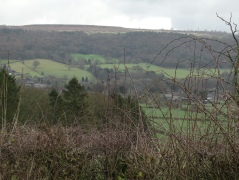 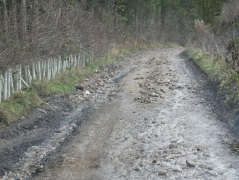 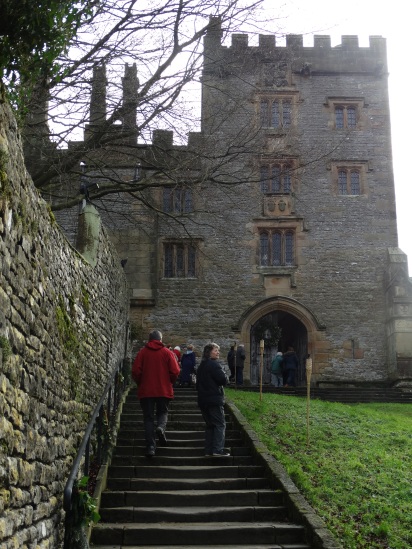 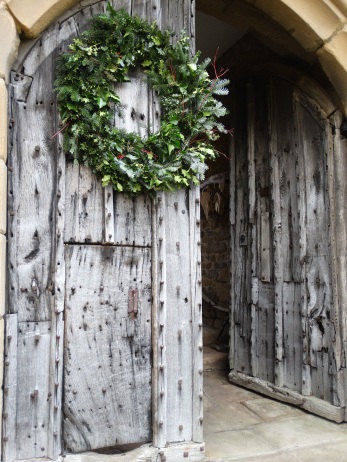 In the court yard you are immediately aware that this is rustic with uneven paving and not the place for someone with a walking disability. And it continues to drizzle. We are looked at by grotesques from every direction (I am referring to the stone ornaments on the down pipes and spouts not the other tourists). 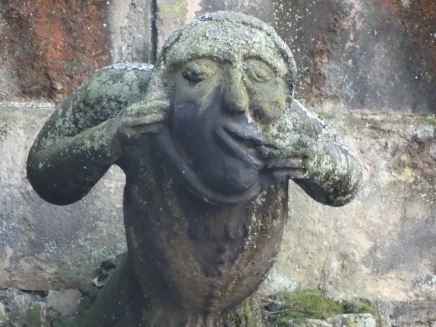 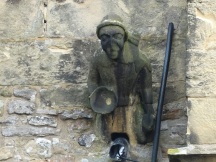 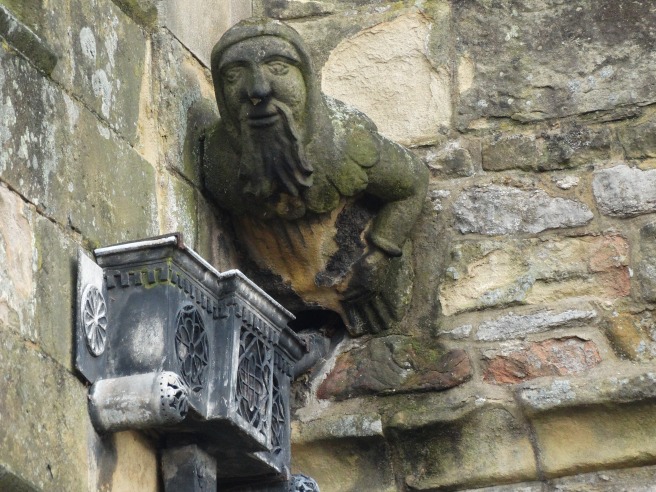 I visit the chapel whilst the others head into the manor house. The chapel floor is uneven and very worn but I got the feeling that everything was very original and was unchanged for centuries. 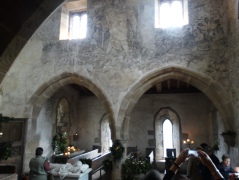 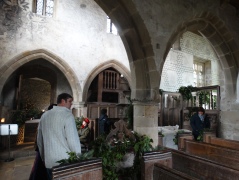 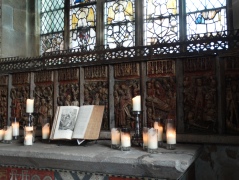 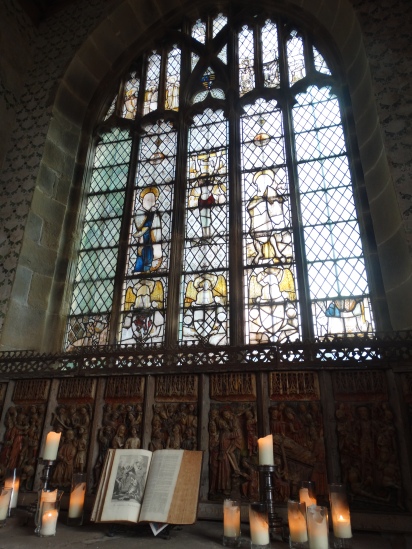 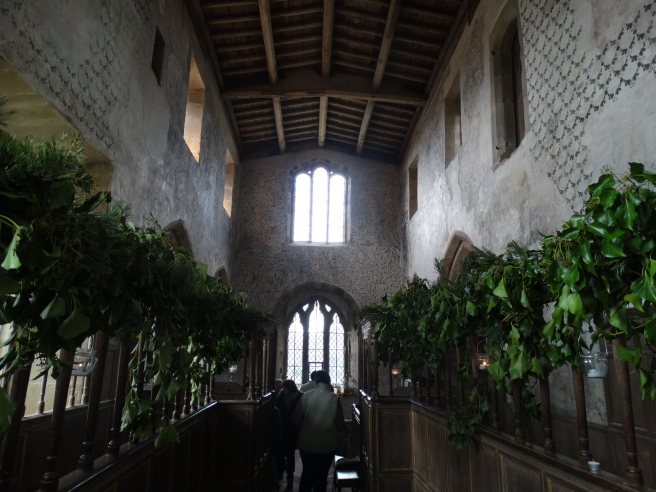 I went up to the manor house and on entering you either went left into the kitchens or right into the main hall or straight through to another courtyard. I caught up with Kerry and we went through the kitchens and the rest of the house. In the Long Gallery the table had been set for Xmas dinner. This is where the Lord and his family would have their Xmas lunch. The family does still live here and I hope the family apartments have been updated as this was cold and breezy. Everyone wanted to be close to the fire.

There were peacock feather garlands around the walls and on the tree. The real deal from real cocks. A miniature piano (not its correct description) stood in the gallery by the tree. It all seemed very homely. The door hinges were weird with the bottom hinge extending beyond the wall at the bottom possibly to hold the weight of the doors. 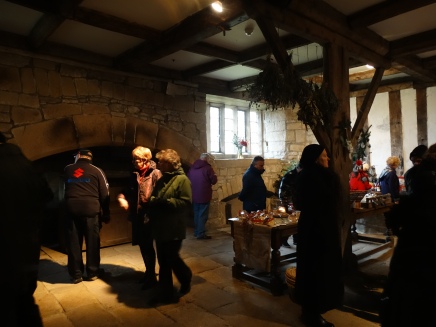 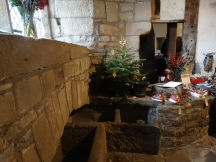 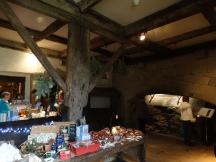 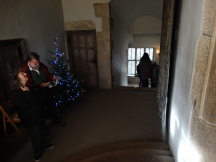 There was a tapestry room and a back door with what must have been the fore runner to the viewing hole in doors today. I ventured out into the gardens but no other brave soul would do so due to the rain and the cold. We then visited the internal courtyard which also showed us the family vehicle entrance. The courtyard was filled with vendors of coffee and confection but we had our thermos in the car so we bid adieu to Haddon Hall to partake of a cuppa. On the way out we visited the old washrooms where there is a small museum of bits and pieces discovered during renovations and restorations including a picture of the last supper. 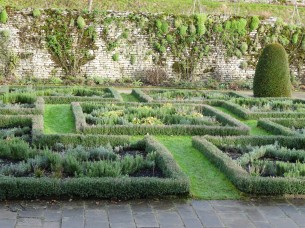 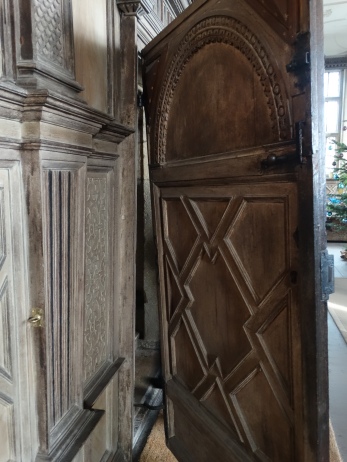 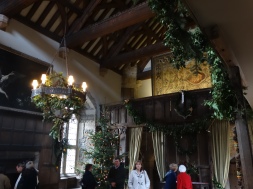 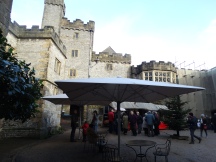 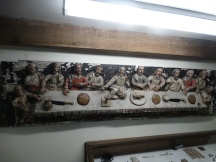