For the last six years we have visited London for the Move It Dance Expo at Olympia Kensington. Although the decision has been made to sell on line and not have a bricks and mortar presence in the UK, we did one more show between February 12 and February 16, 2015.

Our journey started on Thursday February 12 with Kerry’s birthday, a cab trip to Nottingham Coach Station and a three hour forty minute coach trip to London – coach is just so cheap. We arrived at Victoria Coach Station in central London and caught a cab to Olympia at Kensington.

Olympia is an exhibition centre, event space and conference centre in West Kensington, London. Opened in 1886 as the National Agricultural Hall, it was built by Andrew Handyside and covered an area of 4 acres (16,000 m2). The Grand Hall, 450 feet (140 m) in length, by 250 feet (76 m) in breadth, was said to be the largest building in the United Kingdom covered by one span of iron and glass. It now features four event venues and a conference centre.

The event is staged in this building and is filled with Universities (dance and theatre are major courses at Universities throughout the UK), Academies, Dance Schools and vendors in interested industries (like fabric specialist Glitter and Dance). This year we had only a mouse hole sized cubical in which we displayed our fabric and website, meeting all the customers and convincing them that although based in Australia they could still buy our fabrics and costumes.

The days were long and tiring sometimes busy but always deafening from the music and dance troupes performances. 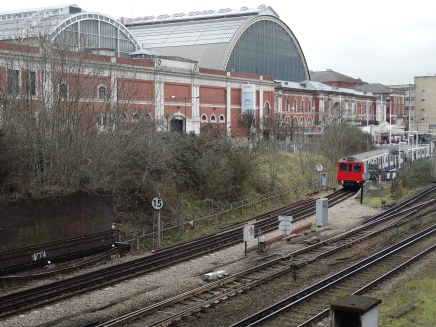 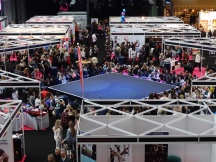 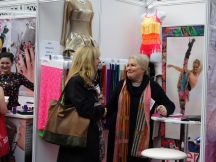 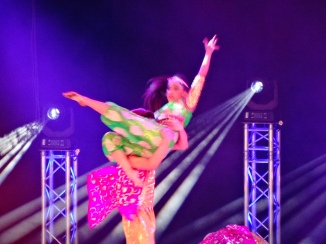 Thursday after setting up our display we dropped our cases at the hotel and caught the underground to Selfridges and the Le Chalet Restaurant. We had seen a documentary on Harry Gordon Selfridge and the emporium he created which wetted Kerry’s appetite to visit the London store. I arranged a booking at the restaurant for her birthday and thereby killing two birds with one stone.

Le Chalet does not feel like a department store eatery as it has its own dedicated lift and is built on the roof in a ski lodge/chalet style. The menu is reasonable and prices on par with other places. The main thing was that Kerry was excited to visit Selfridge’s and be taken to dinner in the same night. After dinner we had a very quick stroll around the store which still attempts to lead the retail industry with presentation and range. 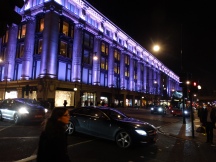 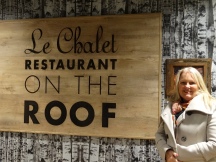 Our room at the hotel was described to us as a small room. This overstatement proved to be wrong – not the smallest room we have stayed in but in that category. Nevertheless we managed and on Friday morning Kerry awoke with disturbed disposition so I walked the 2 klm to Hammersmith Rd with our suitcase of samples and paraphernalia to open the shop. I felt somewhat out of place hiding in my mouses hole and watching the team at Bloch handing out goodies to the passing parade. Kerry arrived around lunch time feeling recovered and we worked through til five o’clock at which time we packed up to go back to the hotel whilst the other retailer’s tried to attract the few remaining members of the public until seven o’clock.

We decided that we would try our hand at the casino over near Edgeware Rd. We caught the underground and quickly found the place. We lined up to register (you must register to join just as we do at home) only to find that our registration from Brighton 7 years earlier was still current. A bit of a worry. Nevertheless we were treated as first timers and given the tour at the end of which we were given a complimentary drink each. We ordered dinner from the bar menu and looked upon the scene of gamblers hunched over the tables hanging on a card or ball. Dinner was fine. As usual with meals over here there was too much carbohdyrates so we shared the chips.

Time to try our hands. Kerry went to the poker machines whilst I tried the roulette games. The poker machine devoured Kerry’s stake so she joined me as I played my 25p roulette machine. My stake rose from my initial £10 to £22 and dropped back to £16 at which time I took the money and ran. Kerry had better luck on these machines but never recovered her earlier loses. Sharna if you are reading – TITO (ticket in ticket out). Home to bed to dream.

Saturday we walked together to Olympia and I then went exploring whilst Kerry watched the shop. I strolled down Kensington High St toward Kensington Palace and Hyde Park, ducking up small side streets and lanes to see what I could see. I came across the Church of St Mary in Kensington Church St and the grave of some poor individual who had been buried in the footpath to be walked over and parked upon for centuries to come. Inside the church the vicar was conducting a baptism and others came to light a candle. I was amazed by the remembrance plaques around the wall dating back to the 18th century and many in remembrance of loved ones who died in the empire but not in Kensington. One chap, a member of the East India Trading Co, had died in service to King and country in Bombay in the mid 1700’s. Outside, the graveyard that once encircled the church had been confined in part to a lane way where the headstones now rested against the wall of the lane and some graves (like the unfortunate mentioned earlier) were now the footpath for the living. 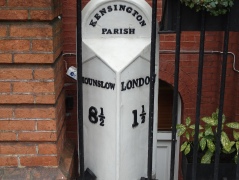 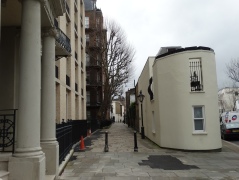 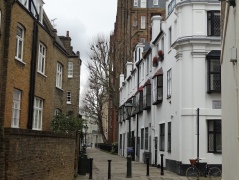 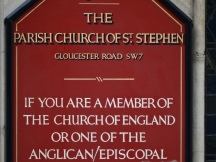 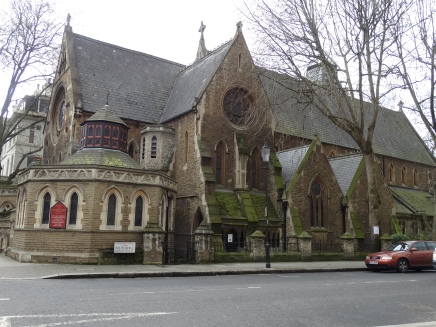 I continued walking ending up in Gloucester St then hung a left to Baden Powell House, the Natural History Museum, Victoria and Albert Museum and on to Harrods. I had lost track of time so when I rang Kerry I was greeted with “where the hell are you!” and an invitation to return to Olympia by the quickest means possible. Which I did. Finished the day at the show and returned to the hotel, dinner and bed.

Sunday saw the same routine except that this time we packed up and ended our last trip to Olympia and the Move It Dance Expo. That evening we dined at the Checkmate Restaurant in Cromwell Rd. Not bad but they were having a bad hair day in the kitchen and service was slow. Meanwhile I was trying to determine who the players were in a very serious picture of a chess match on the wall. The picture had been blown up to a size where the figures were fuzzy. Even so you would expect the staff to know but No not one. I guessed it was Boris Spassky but uncertain as to whether it was his 1970’s game with Bobby Fisher (when he lost his World Champion title to Fisher) or the 1980’s game with Gary Kasperov (the eclectic Russian Master and World Champion). Later research I found the picture – it was Fisher.

The following day after a stroll through Kensington and a coffee at Carluccio’s and a sticky beak in Bill Wyman’s “Sticky Fingers”, we returned to Long Eaton on the coach – happy to be back home. 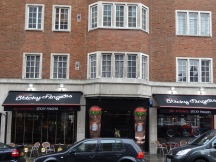