Here at Lincoln Castle we were afforded a guided tour also but unfortunately the weather was turning sour and quite windy and chill. Our guide did the best he could but found himself straying with all sorts of trivia. He said that Lincoln Castle is a major castle constructed during the late 11th century by William the Conqueror on the site of a pre-existing Roman fortress. The castle is unusual in that it has two mottes.

It is open to the public as a museum. Lincoln Castle remains one of the most impressive Norman castles in the United Kingdom. When William the Conqueror defeated Harold Godwinson and the English at The Battle of Hastings on 14 October 1066, he continued to face resistance to his rule in the north of England. After gaining control of York, the Conqueror turned southwards and arrived at the Roman and Viking city of Lincoln.

The castle was the focus of attention during the First Battle of Lincoln which occurred in 1141, during the struggle between King Stephen and Empress Matilda over who should be monarch in England. During the reign of King John in the course of the First Barons’ War the castle also came under siege.

Built in 1787 and extended in 1847, part of the castle became a prison. William Marwood, the 19th century hangman, carried out his first execution at Lincoln. He used the long drop, designed to break the victim’s neck rather than to strangle him. Until 1868, prisoners were publicly hanged on the mural tower (Cobb Hall) at the north-east corner of the curtain wall, overlooking the upper town.

Imprisoned debtors were allowed some social contact but the regime for criminals was designed to be one of isolation, according to the separate system. Consequently, the seating in the prison chapel is designed to enclose each prisoner individually so that the preacher could see everyone but each could see only him. Lincoln Castle remained in use as a prison and law court into modern times, and is one of the better preserved castles in England; the Crown Courts continue to this day.

The castle is now owned by Lincolnshire County Council. Parts of the prison are open as a museum, including the 19th–century chapel. 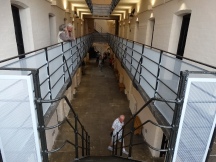 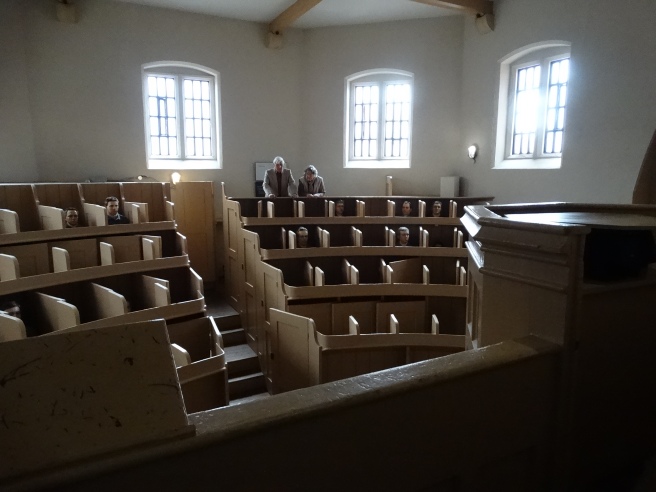 It is still possible to walk around the immense Norman walls which provide a magnificent view of the castle complex, together with panoramic views of the cathedral, the city, and the surrounding countryside.

A square tower, the Observatory Tower, stands on top of the first mound, standing above the outer walls to dominate the city of Lincoln. The story goes that this tower was used by the prison governor to perve on the women in the women’s prison. The second mound is crowned by the ‘Lucy Tower’, which was probably built in the 12th century and was named after Lucy of Bolingbroke, the Countess of Chester until 1138. Many of the prisoners were buried here and only their footstones remain to mark their grave. The western gate has a modern bridge entrance but earlier roman foundations have been found at this point under the castle. 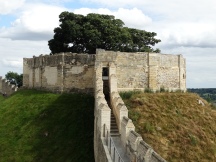 In the castle grounds is part of one of the Eleanor Crosses. The Eleanor crosses were a series of twelve lavishly decorated stone monuments topped with tall crosses of which three survive nearly intact in a line down part of the east of England. King Edward I had the crosses erected between 1291 and 1294 in memory of his wife Eleanor of Castile, marking the nightly resting-places along the route taken when her body was transported to London.

Following a most entertaining visit to the castle we ventured down Steep Hill past Jews House and Jews Court (two buildings linked with L:incoln’s medieval Jewish community – the Jews were expelled because early Christian law did not allow money to be loaned with an interest charge but there was no such inhibition for the Jews who became wealthy and powerful until Edward 1 banished them and took all their loans and collected the money) through the Stonebow but before getting there we found the best coffee shop serving some exotic cakes and the sun came out to warm us as we sat in the courtyard at the top of the coffee shop. 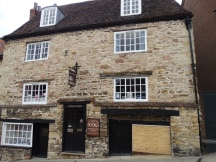 After sunning ourselves we completed the walk to the commercial areas of Lincoln, the High Bridge, the Glory Hole and the renovated Brayford Pool. The Brayford Pool is a natural lake formed from a widening of the River Witham in the centre of the city. It was used as a port by the Romans – who connected it to the River Trent by constructing the Foss Dyke – and has a long industrial heritage. Today, the waterfront surrounding the pool is home to hotels, restaurants, bars, entertainment venues and a University. The High Bridge is the oldest bridge in the United Kingdom which still has buildings on it. The Glory Hole is the name given by generations of boaters to the High Bridge. It has a narrow and crooked arch which sets a limit on the size of boats using the Witham and going from Brayford Pool, at the start of Foss Dyke, to Boston and the sea.