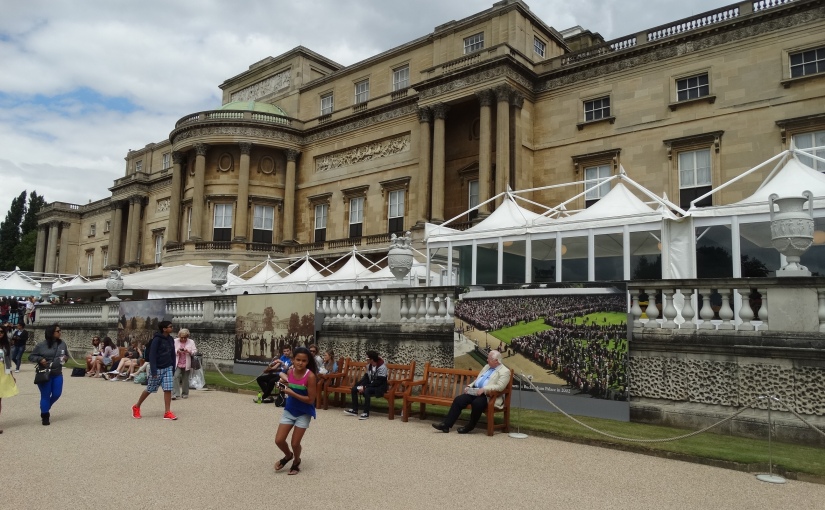 Today we go to see the Queen. Well at least her London home. Our tour takes in the Queen’s Gallery, the Royal Mews where her coaches and coach horses are housed and the State Rooms of the Palace.

The Queen’s Gallery is a public art gallery at the west front of the Palace on the site of a chapel bombed during the Second World War. It exhibits works of art from the Royal Collection (those works owned by the King or Queen “in trust for the nation” rather than privately) on a rotating basis; about 450 works are on display at any one time.

We arrived early to beat the crowds but lined up for the State rooms instead of the gallery. Oh well we were not the only ones in the queue that day. 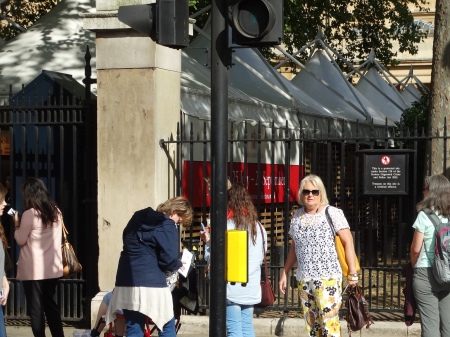 With directions we soon found the gallery but we were still early so we browsed the Royal gift shop. One thing about the Royal family is that they are good for tourism and they produce plenty of memorabilia to satisfy the tourist throngs.

This exhibition was entitled “Painting Paradise” and presented paintings of gardens down through the ages. The entry fee provided you with an audio guide which provided information on some of the more important paintings. As with all art there is the pretty picture that satisfies the eye and then there is the art with a story such as the picture of Henry VIII with Jane Seymour and their son or the Rembrandt portraying the resurrection of Christ as a gardener. To read about it in detail go to;

You will not be disappointed.

The Royal Mews is a combined stables, carriage house and in recent times motor garage of the Royal Family. In London the Royal Mews has occupied two main sites, formerly at Charing Cross, and since the 1820s at Buckingham Palace. I have always wondered where the word Mews comes from so after visiting the Royal Mews I consulted Wikipedia which says “The first set of stables to be referred to as a mews was at Charing Cross at the western end of The Strand. The royal hawks were kept at this site from 1377 and the name derives from the fact that they were confined there at moulting (or “mew”) time. The building was destroyed by fire in 1534 and rebuilt as a stables, keeping its former name when it acquired this new function.”

At the time of our visit there were half a dozen coaches including the Diamond Jubilee coach and the Gold State Coach, which was built for George III in 1762. Weighing almost four tonnes and requiring eight horses to pull it, it has carried every monarch to their coronation since 1821.

Among the vehicles on display are the Irish State Coach, and the 1902 State Landau, used for recent royal weddings including that of Prince William and Catherine Middleton.

Buckingham Palace was originally known as Buckingham House. The building which forms the core of today’s palace was a large townhouse built for the Duke of Buckingham in 1703. It was subsequently acquired by King George III in 1761 as a private residence for Queen Charlotte and was known as “The Queen’s House”. During the 19th century it was enlarged, and became Buckingham Palace the official royal palace of the British monarch on the accession of Queen Victoria in 1837. The palace chapel was destroyed by a German bomb during World War II; and the Queen’s Gallery was built on the site.

The original early 19th-century interior designs, many of which still survive, included widespread use of brightly coloured scagliola and blue and pink lapis, on the advice of Sir Charles Long. King Edward VII oversaw a partial redecoration in a Belle Époque cream and gold colour scheme. Many smaller reception rooms are furnished in the Chinese regency style with furniture and fittings brought from the Royal Pavilion at Brighton and from Carlton House. The Buckingham Palace Garden at approx. 37 acres is the largest private garden in London. The state rooms, used for official and state entertaining, are open to the public each year for most of August and September, as part of the Palace’s Summer Opening. 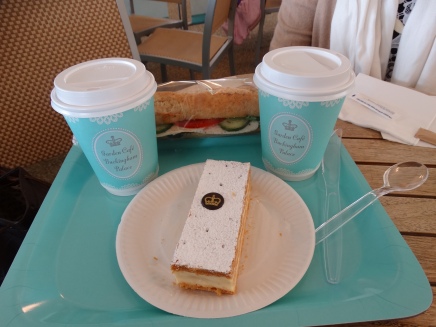 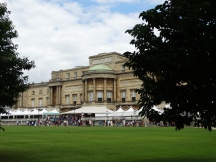 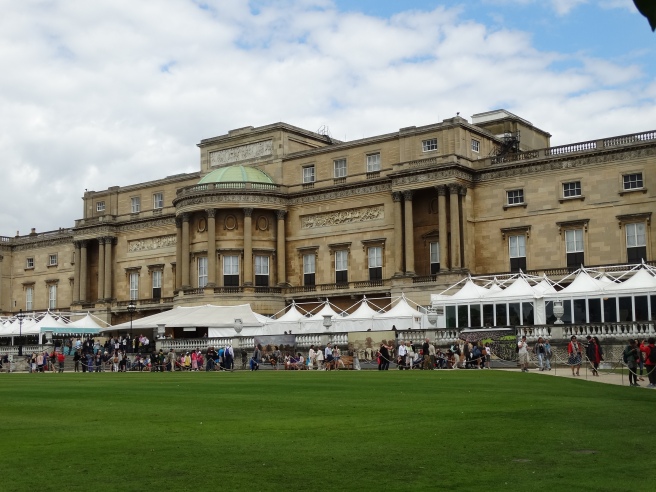 Again our entry fee included an audio tour with a considerable amount of information and sub directories on different aspects. You need every minute of 4 hours to complete this tour. We finished in the gardens where we had a light lunch along with hundreds of other visitors. We then exited through the garden which included another gift shop. On to Victoria Tube station and Tower Hill to visit Tower Bridge.