Fountains Abbey is one of the largest and best preserved ruined Cistercian monasteries in England. It is located approximately three miles south-west of Ripon in North Yorkshire, near to the village of Aldfield. Founded in 1132, the abbey operated for over 400 years, until 1539, when Henry VIII ordered the Dissolution of the Monasteries.

The abbey is a Grade I listed building owned by the National Trust and part of the designated Studley Royal Park including the Ruins of Fountains Abbey UNESCO World Heritage Site. For more of the history of the site go to:

Nerida Bishop had been telling us for ages that this was one place we had to visit and she was right. For our experience we walked through a forest along a cliff edge to reach the abbey ruins. Along the way we stopped at a bird hide to see what creatures were in the forest. The groundsmen set up a feeding site for the birds and one squirrel must have thought he was a bird. Not content with scavenging on the ground he climbed up on to one of the feeders – well see for yourself. 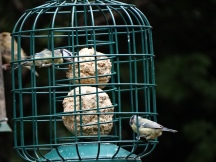 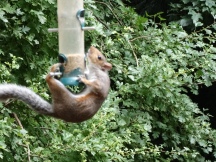 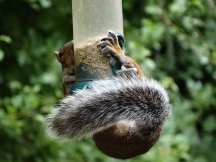 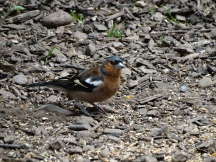 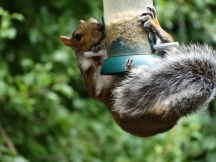 Then we made our way down to the ruins and met the volunteer guide showing tourists through the site and giving us the history. It seems that a number of Benedictine monks decided that life was too easy around York and they had lost their religious way. They formed their own group and were given some lands in this valley where they nearly froze to death but having survived went on to prosper join the Cistercians and suffer the same fate of the Benedictines – victims of their own earthly success, until Henry VIII took all that earthly success for himself.

Well in 400 years they developed this Abbey to the point where it was more palace like than abbey. The ruins tell you that but the giveaway is the last of the Abbotts built a tower for no other reason than to have a tower and show off the wealth of the abbey. Anyway enjoy the photos, they include the water mill which believe it or not was still working until 1936 and then became a generator for Fountains Hall for another 20 years.

Despite the ruins being at the bottom of a cliff the imposing tower was evident from far away. As we climbed down the cliff we could see the body of the church with the large set of storage rooms running across the face of the Abbey. The Abbey is located beside a creek which once ran straight but has been diverted to one side and used to carry waste and sewerage from the Abbey. The roof and windows have been gone for a long time but it is obvious that the weight of the roof and enormous windows caused stresses on the building frame with buttresses built to re-enforce walls and window cracks cover with clever masonry figures. 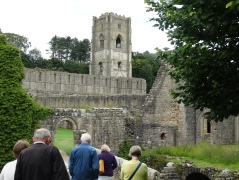 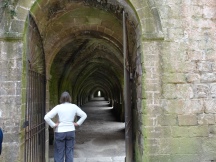 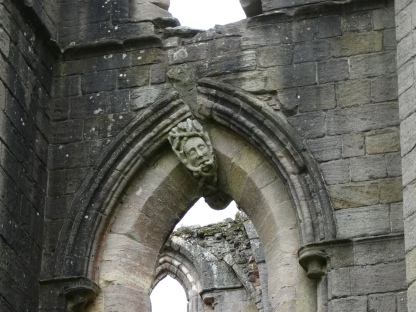 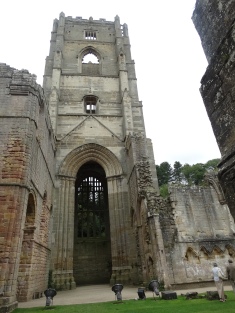 The watermill although not as impressive has proved to be the most resilient building and it still generates power for the Hall today.

As we departed we made a quick call to the Hall where a wedding was occurring. There was not much to see really but it was interesting to learn that the Lord of the Manor had supported Charles I in the Civil War and lost his fortune for choosing the loosing side.