Next morning there was no sign of rain. Our planned tasting tour for tonight remained promising so what to do for the day. Kerry had been wondering about twin bell towers which appeared to be nearby. After breakfast we headed up the hill instead of down to the old town. Within five minutes of walking, we found the Church of St Vincent de Fora- a grand building but the church seemed to be only a small part of the structure. Also there was a bridge across the road connecting it to who knows what. Inside the church seemed to be higher than any other (probably not just appeared to be) and strangely one of the statues was dressed like a barbi doll.

After leaving the church I noticed a gateway with a sign “Mosteiro de Sao Vicente de Fora – Welcome”. So we went in. Inside the wall was a garden and another doorway leading into another part of the building. It was now clear that the Church was part of the Monastery. The Monastery ceased to be a monastery in the late 19th century with the abolition of monasteries throughout Portugal but now it is open to the public to view the roman remains on which the monastery was built. This was to prove to be a hidden gem of knowledge and history.

For 5 euros each we visited the roman cistern which was adapted by the Augustinians to catch the rain water to provide for the whole of the monastery. From there we walked up into the monastery itself. The walls are tiled with frescos of life in every room with each tile hand painted to make up the Fresco. The ceiling has been painted by an Italian master and this is the only remaining piece of his work. Even the bannisters had tiled posts that had been hand painted. From here we could look into the entrance courtyard and even view the coffin of one of the past residents. Then followed a treasury of gold and silver ecumenical gowns and ornaments (which I was not permitted to photograph) along with a history timeline giving the progression of the site from the Romans to the present.

Out in the courtyard in the centre of the monastery the tiled frescos continued until we found the Sacristy (where the canons would robe). The ceiling is painted with a vivid mural whilst the walls are covered in tiles with the robes contained in jacaranda chests. The in the next courtyard is the mortuary of the kings – a mausoleum of the last Kings and Princes of Portugal. 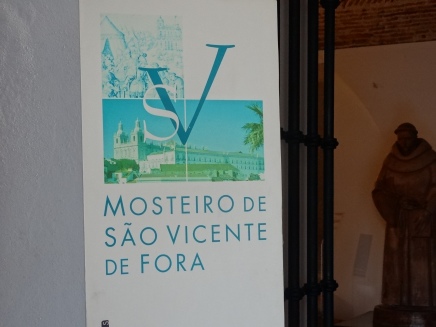 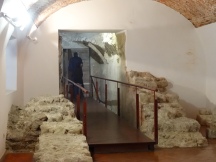 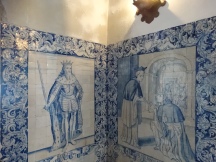 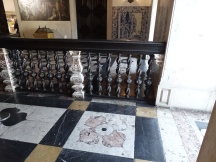 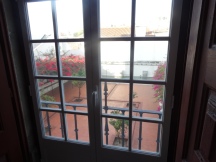 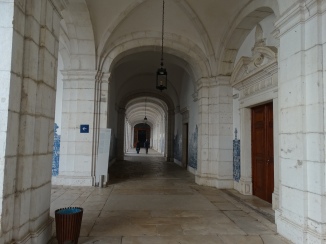 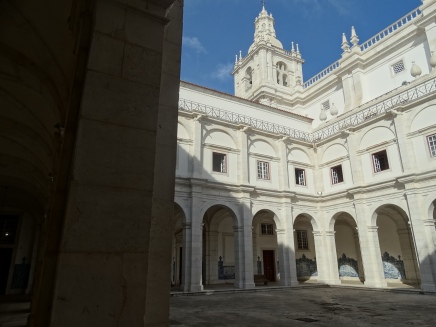 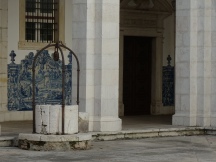 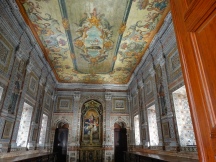 Up to the next floor we find a display of items from archaeological digs around the monastery and Lisbon items going back to the Phoneticians. On the same floor there is a display of La Fontaines’ Fables in tiled frescoes. La Fontaine published 3 collections of fables commencing in 1688 – a total of over 240 fables using animals to portray morals and ethics of the 17th century community.

After viewing a number of the fables we found the doorway to the bell tower so up we went – over 50 stairs. From this point we could see the castle do St George, another domed church nearby and the enormous roof of the monastery.

We left the monastery after 3 hours to head toward the castle. On finding the castle I read that it was made up of the ruins, a small museum and the community living within the castle walls. We chose to spend the money on lunch not the castle so we found a restaurant under the castle walls in the back streets. Lovely lunch – quiche and salad for Kerry and a toasted sandwich topped with olive tapenade for me coffee and two cakes.

Now we headed down the hill to the city via a different route. We found some interesting graffiti leading us to the major square in Lisbon. Later on our Fado tour we were to learn the reason for the graffiti.

Moving from the square we found the train station in the Manueline form of architecture (a mixture of renaissance and Moorish architecture favoured by King Manuel). Near the train station we found the official tourism office and learned more about Portugal before buying our day passes and catching the funicular “Grace” up the hill. On top of the hill we found more parks, views to the castle and some quiet places to watch the world go by. 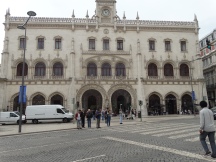 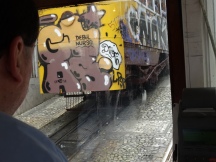 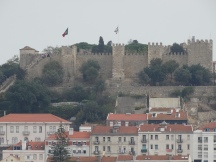