We awake in Poitiers. I am still waking early despite the lack of sunlight and the overcast weather. Breakfast in our room, packed up checked out then strolled the medieval city which has been transformed by modern paving in the narrow streets and limiting traffic to essential commercial traffic. But Mondays are strange in that none of the shops opened before 2.00 pm. Visited a Romanesque church Notre Dame Le Grand Dame said to be the oldest church in France (12th century) and it still has some of its original frescos. 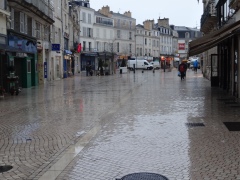 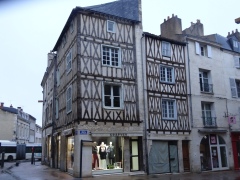 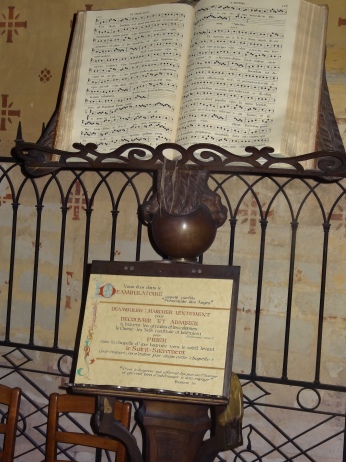 As we walked through the old streets we entcountered a hairdresser with a big imagination. Spotted a cafe – well actually we smelt it first – so we shot over for a hot chocolate. Met a French woman who teaches French to foreign students and they in turn are teaching her English and she practised on us. We also visit another Romanesque church Eglise la Porchaine unusual because it is square and has a 3 storey square bell tower.

It was still raining and very little open so we decide to trek on to Dampierre sur Boutonne to visit cousin Terri and her husband Mick. We arrived just about lunch time.

Dampierre is a rural village of about 50 homes about 1 hour west of La Rochelle. Mick and Terri have lived here (I’m not certain) 15 years plus. Shortly after moving from Brighton to Dampierre, they renovated an abandoned house and create “gites” French holiday accommodation, Mick turned his hand to renovating for other Poms taking advantage of their EU status to invade France once again. One of the projects they have taken on is the renovation of a house at Leger. Mick’s youngest son Daniel is visiting (he also has bought and renovated abandoned houses) and over lunch we talk them into showing us the progress with this renovation (Daniel says it still looks like a WW1 house on the Somme). So we drive toward Aulnay through the back blocks of the back of beyond to Leger.

It is as pretty as I remember it. An abandoned house with granny flat looking across open French fields. Today one of Terri’s neighbours is planting a plot of potatoes with a garden fork – a centuries old scene. There is still a lot of work to be done but they are both still enthusiastic about the project. A combination of poor holiday seasons and Mick’s health not permitting him to work has seen a shortage of cash for the project but still Mick has performed a lot of the fundamental reconstruction needed. Personally and Mick now agrees he should have bull dozed the house and started again but that would not have the same charm, Back to Dampierre a warm fire and hot meal. Kerry has developed a sore throat and goes to bed and I bore Terri, Mick and Daniel with photos and we reminisce about Dad’s emigration as a 19-year-old to start a new life in Australia.

After a relaxing night in the piggery (now renovated as a gite) I awake early once again – I cannot seem to sleep past 4.00 am. Still dark and cold but it must be time for a cuppa to start the day. It is the end of February and we are still in winter. It is raining windy and cold. We thought we would visit the donkeys and then go to La Rochelle to see if our memories of the town are accurate.

So we drove over to the donkey farm where we saw the local breed of donkey brought back from extinction through one stallion and careful breeding. The Poitou donkey or Poitou ass, also called the Poitevin donkey or simply the Poitou, is a breed of donkey originating in the Poitou region of France. Long ears and a hairy coat they look a little strange.

Then we travelled out to the coast to La Rochelle. It was windier and colder making it difficult to find the town we remembered. But we did buy a Euro millions ticket and out popped two tickets = a good omen and Kerry who had been longing for a crepe citron got her crepe. The weather does not improve so we head home for a warm fire and a cuppa. Mick and Terri arrived later and we put on some nibbles before dinner. Terri pulls out her Euro Millions ticket and we agree to pool our chances.