Next morning, we arose late at 0730 and dined at 0830 with Jim and Mary before docking at Finnsnes and heading off to Camp Tamok for our wilderness adventure. Finnsnes is a small town located in the municipality of Lenvik in Troms county, Norway. The town is located on the mainland part of Norway, across the Gisundet strait from the island of Senja. Our bus driver had a hole in his throat and used a hand held “microphone ” which he held at the hole in order to speak. While travelling through the countryside he took a call on his mobile – the mobile in one hand, voice enhancer in the other and driving the bus with his knee – no trouble! On the way we passed a 4 wheel drive that had slid off the road just to show how much of a risk he was taking.

2 hours on the bus then we were greeted by Rufuo a Sami who became the tour leader. A change into warmer gear (it is now -10c) and I was heading off to snow mobiles (skidoo) while Kerry went with Doug and Nerida on the Husky sledges and Reindeer ride. The snow mobile was exciting but most of the participants were novices so the guide took it easy particularly after there was a rollover by one of the snow mobiles. I was conscious also that I had a passenger a Dutch lady travelling with her girlfriend. Then having finished the snow mobile ride we went to the reindeer where Rufuo introduced us to his animals and told us a bit about Sami life (including that he kills these animals and butchers them for meat for his family). Riding on the traditional sleds was very peaceful and slow. Temperature -14 degrees. Back to the Sami village (a mock up) to the Sami lavu (tent) for some of bambi in a stew and a cup of tea. Then another one and a half hours in the bus to catch the boat in Tromso. 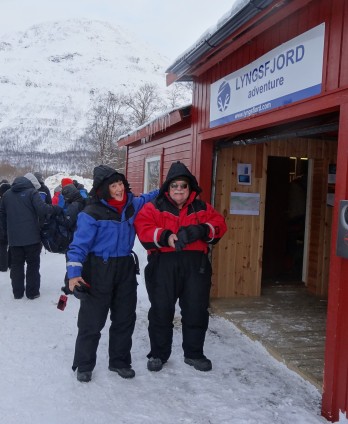 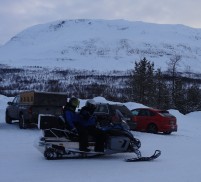 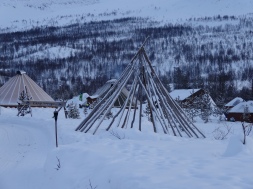 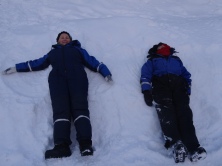