My Birthday. I awoke and opened my present from Doug and Nerida that I had kept for the day. I had the sausages (ho hum) and then we hit the track for the Bushmills distillery. I don’t need to tell you that was grand and I had three whiskeys to celebrate. 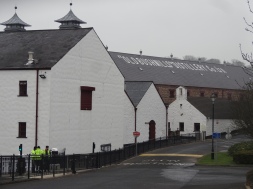 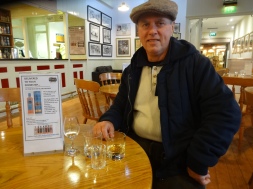 Nearby is the Giants Causeway and something I have always wanted to see. Just remarkable and a very stimulating walk to see nature’s handiwork at its best. 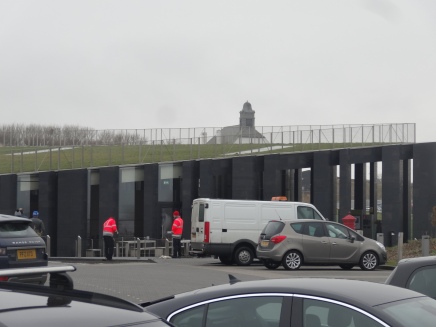 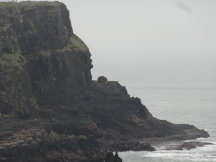 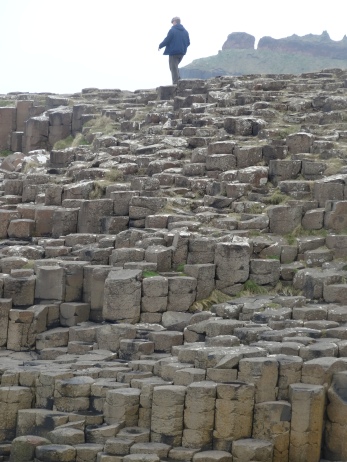 Kerry had noticed on our map the rope bridge at Carrick a Rene a little further along the Causeway coast. This is a 30m rope bridge from the cliffs on one side to the island on the other-side. The bridge started out as the means for fishermen to launch their nets to catch salmon (there is a cottage on this little rock with fishing dinghy and derrick to lower it to the sea). The bridge for them was a little cruder than today’s bridge (a single strand rope I am told). The walk to get there and the 172 steps down to the top of the ladder down to the bridge was pretty demanding. I can only imagine the trip for the fisherman and carrying gear across on the rope. It was great fun with dramatic scenery and something I would recommend to all visitors.  To end our visit we had a picnic lunch of leftovers and Vegemite sandwiches near the gift shop. 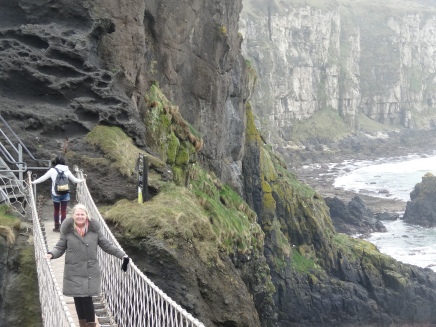 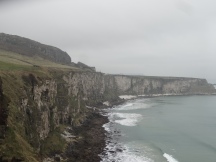 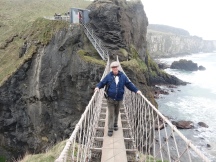 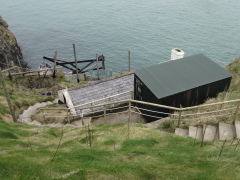 On the way back from the bridge we noticed other ruins on the coast and a nearby island. I chatted with the car park attendant who was a local and told me that they used to quarry dolomite for paving stones for Glasgow Streets and that the dolomite was transported to the island by flying fox and loaded onto ships for Scotland. When bitumen replaced cobbles the mining ceased but then they mined the limestone cliffs for the limestone so some of the other ruins were the kiln where they burnt the lime and the crusher. The gift shop was a former mine building and the mine mangers house is still used today. The mining ceased in 1970s.

We then went to Belfast and strolled the city streets. Kerry had found Deane’s Eipic Restaurant (spelling is said to be gaelic for Epicurean) by searching on the net. The owner and chef had operated a Michelin 2 star restaurant and had sold that business to open Deane’s Eipic to get away from the confines of the Michelin style. It is actually 3 restaurants adjoining one another – a steak restaurant with aged meats between the style of the Breakfast Creek Hotel and Moo Moo here in Brisbane, a seafood restaurant and a fine dining restaurant. It was my choice and fine dining for me. Finest dinner ever. Seven courses with a carafe of Spanish red in a fine dining restaurant – not what I had expected in Belfast. I went to bed very satisfied and won’t forget my sixtieth. 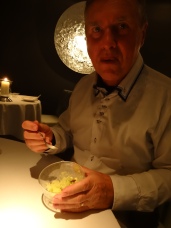