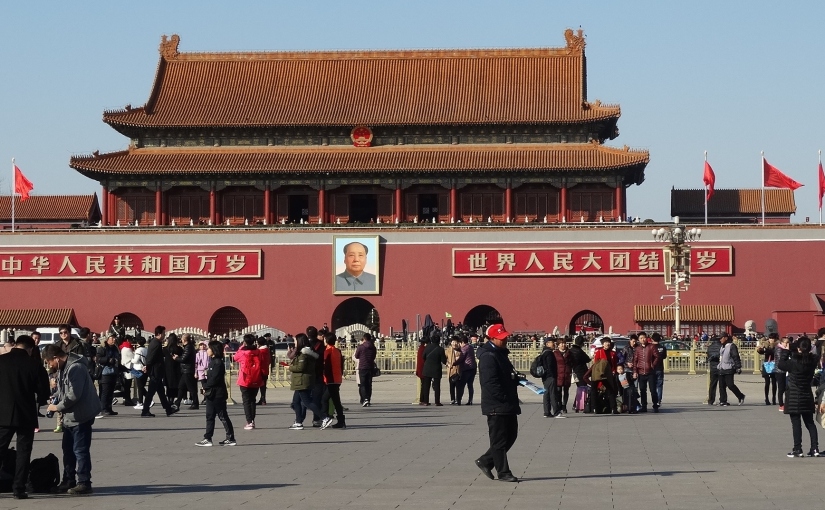 One thing the travel itinerary did not tell us was how much walking was involved. The bus could never park where we intended to go but some distance from the site and we had to hoof it there. Such was the case with the Forbidden Palace. Now everyone knows the Palace is accessed from Tiananmen Square (not true and I will tell you why – keep reading).

We left the restaurant and we were dropped off near the Square. It has changed a bit since I was there in 1998 so it took me some time to work out that it had been fenced off with a security check installed so you cannot get to the Square without a security check. Unbeknown to everyone an American tourist had been caught with a bullet in his pocket trying to enter the Square and this caused a tizz. There were multiple queues 150 people long and it took an hour of waiting in line to get through so that we could cross to the Square. 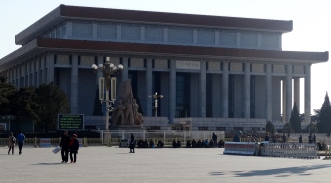 On passing through the outer wall you realise that there were a number of other external walls which have been pulled down over time and all that remains to tell this is the meridian – the central path that runs through the city joining up the random bits that remain of the once mighty walls of the city.

The Forbidden City was the Chinese imperial palace from the Ming dynasty to the end of the Qing dynasty—the years 1420 to 1912. It now houses the Palace Museum. It served as the home of emperors and their households as well as the ceremonial and political centre of Chinese government for almost 500 years.

Constructed from 1406 to 1420, the complex consists of 980 buildings with 8,886 bays of rooms and covers 72 ha (over 180 acres). The Forbidden City is a rectangle, with 961 metres from north to south and 753 metres from east to west. The palace complex exemplifies traditional Chinese palatial architecture. The Forbidden City was declared a World Heritage Site in 1987, and is listed by UNESCO as the largest collection of preserved ancient wooden structures in the world.

Since 1925, the Forbidden City has been under the charge of the Palace Museum, whose extensive collection of artwork and artefacts were built upon the imperial collections of the Ming and Qing dynasties. We passed through the inner wall and were confronted with a fenced off entrance to the Imperial Palace – the long delay at the security check meant we were too late to visit the Forbidden City.

However, I took photos of the buildings and the architecture which included the sign which I think says Gate of Supreme Harmony. 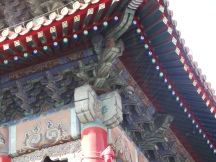 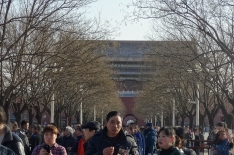 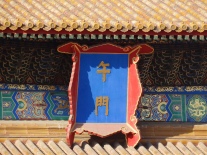 We left by the eastern gate called East Glorious Gate and outside found remnants of the old moat. At the four corners of the wall sit towers with intricate roofs boasting 72 ridges, reproducing the Pavilion of Prince Teng and the Yellow Crane Pavilion. These towers are the most visible parts of the palace to commoners outside the walls. We walked along an unknown street following Eddie’s yellow flag supposedly a long walk back to the bus which changed to a long walk to “5th Avenue” and a long wait for dinner. The walk allowed us to see more of the old Beijing until we hit 5th Avenue when it all changed and we were in down town New York except everything was in Chinese. We also saw some interesting street art but fled to McDonald’s for warmth and a cup of coffee where we met the “Little Rabbit “. She and her mother sat beside us and her mother allowed us this photo. 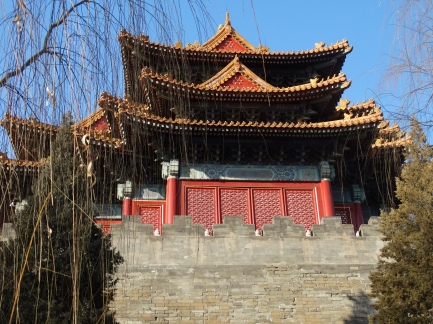 Finally, Eddie returned to take us to dinner. We catch the bus for the shortest bus trip of the tour thus far to our restaurant for dinner.  As we get out of the bus, there in front of us is Wangfujing Catholic Church. It was originally named after Joseph, the father of Jesus Christ, as ‘Saint Joseph’s Church. As we walk along I encounter one of the scooters with the cold weather enhancement seen all over Beijing, Dinner was pretty good – five Star restaurant and we left very satisfied for a long ride to our hotel through some traffic snags and I began to realise the Chinese driver is very patient driver to go through this each day. Our trip took us past one of the Olympic Games site all of which was illuminated against the night sky. We also saw the huge growth in apartments that was to be repeated everywhere we went. 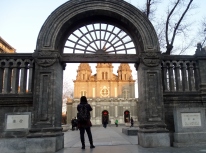 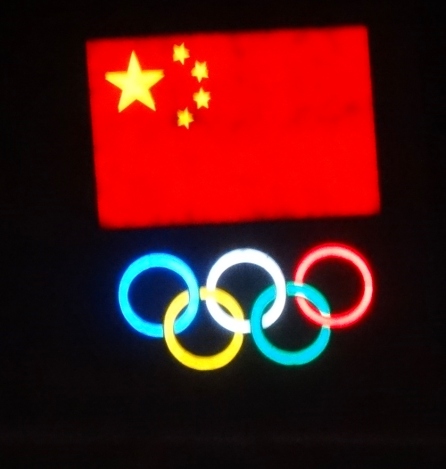