After seeing the silk embroidery, I was looking forward to visiting the silk factory the following day. It hardly looked like a factory and it was not. It was a tourist stop with some minor demonstrations on the life cycle of the mulberry caterpillar, the moth and then the pupae in the cocoon, the treatment of the cocoon and finally the sales room. We started with an explanation of the life cycle and the importance of double cocoons as opposed to single cocoons (about 1200m of silk filament from a single and 1800 – 2000m from a double plus the guarantee of a male and female moth to reproduce). We were then told of the benefit of silk fabrics and shown silk doona, mattress protector and duvet. We were then shown how they loosened the filament to make the thread and how tough the silk can be. They also boil the cocoon to kill the pupae before they eat their way out and of course the pupae are eaten by the Chinese. The cocoon after boiling can be stretched over a metal implement from which they draw off the filaments. We were sold on the idea of a silk doona and purchased the mattress protector, and two light weight doonas for about the same price as a synthetic doona here in Australia. In addition, we made some other purchases before enjoying lunch in the 2nd floor restaurant. No not really a factory.

We then set off for Hangzhou and a visit to West Lake which is  freshwater. It is divided into five sections by three causeways. West Lake has influenced the Chinese for its natural beauty and historic relics, and it has also been among the most important sources of inspiration for Chinese garden designers. It was made a UNESCO Heritage Site in 2011, described as having influenced garden design in the rest of China as well as Japan and Korea over the centuries.

We picked up our local guide Jack and drove straight to the park containing West Lake. Again, we boarded a Chinese ferry to slowly drift around the lake, admiring the countryside the gardens the Pagoda the view of the city and the wild life. Not very exciting except for Jack who worked hard to find something interesting to say about this body of grey coloured water. However, there were some highlights like the floral arrangements on the walk to the ferry, the quaint little car used by the Tourist Police, the floral arrangements of a lotus near the ferry wharf and the ferry itself. We were joined on board by another tour group from Malaysia and Jack was given the floor to find the interesting things to say about what we were seeing. 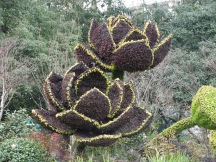 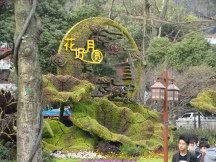 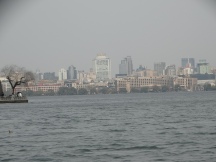 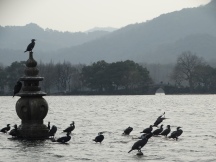 A highlight for us was finding a shop selling ice creams. As we sat on the causeway park we notice the wind was rising – tomorrow will be cold. An early dinner meant we did not get to our hotel until after dark. As with Suzhou, the buildings were lit up. Unfortunately, I had to take the pictures from the moving bus, until we arrived at our 5 star Jimna hotel. 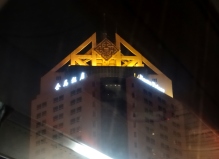