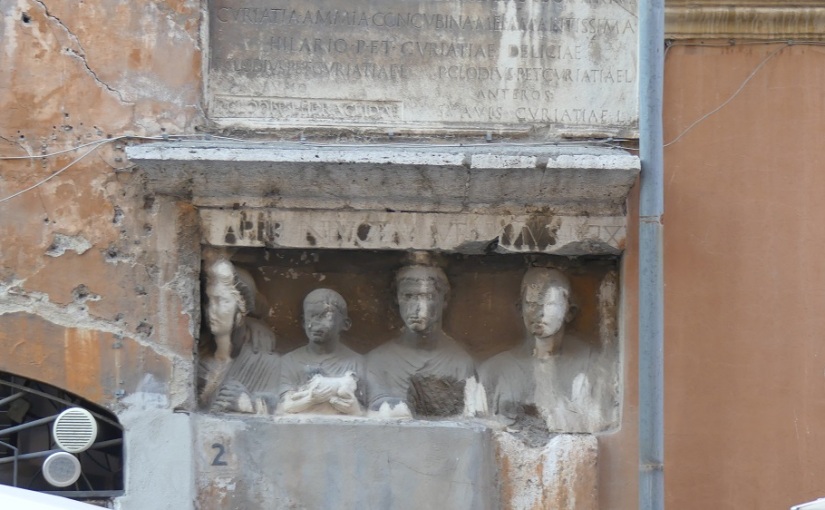 The train trip was without incident. We are getting well-travelled on Italian trains, but the secret is to never get complacent and think you know it all. We arrived at Roma Terminii and thought our accommodation was close by. Well it was stinking hot and we knew the general direction through Piazza della Republica down Via Nazionale. But finding the right door. Our hotel was a suite of rooms in a larger building which fronted Via Nazionale and we had to ring the bell and wait for an answer. This did not happen without error as the manager was off doing something for another guest and did not answer his phone. And it was hot. After what seemed an interminable wait someone opened the door and we got inside the courtyard out of the sun. When the manager arrived, and he pointed us toward a set of stairs Kerry asked about the lift and we were told it was at the top of the stairs. That was enough Kerry. Kerry was certain I was not able to climb the stairs particularly as we were staying a number of days. After some kerfuffle we were changed from one suite to another suite of rooms and all was well again save that we would have to change room again tomorrow. After all was said and done she was right, dragging my moon boot up the stairs would soon wear very thin.

After settling into our room we were off for our Segway tour of Rome. According to the tourist map the Segway tour office was just down the road – well not quite. Feeling adventurous we hailed a bus and guided by our tourist map, got off at Piazza Venezia and the Vittoriano. There’s no way to miss the hustle and bustle of Rome’s largest round-a-bout: the Piazza Venezia. On one side you can look down Rome’s longest street, the Via del Corso to the ancient northern gates of the city. From another angle, the ruins of the Imperial Forums lead the way to the Colosseum. Take a different road and you’ll end up in the Jewish Ghetto, on your way to Rome’s Trastevere neighbourhood and last but not least, towering over the piazza, is the unmistakable marble monument: Il Vittoriano.

This enormous monument derives from the name of Italy’s first king, Victorio Emanuele II of Savoy to whom it is dedicated.  Another name is “l’Altare della Patria” or “Altar of the Fatherland” as the monument was built to celebrate Italian unification and the birth of Italy as a nation at the end of the 19th century.  Most Romans aren’t a fan of the monument which they say doesn’t blend in with the rest of the city skyline.

The centre piece of the Vittoriano is the enormous bronze equestrian statue of the first king himself. Over the steps in the centre stand the actual “Altar of the fatherland”, containing the tomb of “The unknown soldier”, a symbolic reminder of all the unidentified deaths of WWI. In front of the altar’s relief, visitors can see the statue of the goddess Roma with the secret eternal flame, always guarded by soldiers.

Using Vittoriano as as landmark, we walked down Via del Theatro di Marcello and unknowingly past the street leading to Turtle Fountain and the Segway office. We walked down to the church of San Nicola in Carcere and s**t it was hot. We decided to give it up and crossed the road to catch a bus home. We would have had better luck finding hen’s teeth – nothing came along and we were roasting in the sun. So we hailed a cab and decided to ask the driver to take us to the Turtle Fountain – sure he knew where that is and under 5 euros we were there and the tour office was closed but not the bar beside it and we needed a drink.

So, we tumbled in sat down and ordered a gin and tonic and a beer and some water. That was it and there we remained until the tour office opened and I could try to recover the loss of the booking. this little bar feed and watered us for the rest of the afternoon. A short time later on another visit we would walk down the lane obscured by the fountain to the Jewish quarter.

Well the tour office finally opened. With a slight case of sunstroke and the power of a couple of gins and a beer I went to plead our case for a refund of the lost tour. To my amazement  our booking was not lost as I had mistaken the date and our booking was for the next day. However we had learnt our lesson and we shifted the tour to the evening due to the heat of the day. I returned to the bar and we stayed ultimately having dinner and making our way home after the sun had set.

The next day we went back to the Turtle Fountain area and explored the Jewish district. Evidence of the roman period was obvious all the walls above us. Roman writing to sculptures in niches in the wall to forgotten ruins in the middle of the residential neighbourhood.

From the Jewish quarter we strolled across Tiber Island. The only island in the Tiber that flows through Rome it is boat-shaped, approximately 270 metres (890 feet) long and 67 metres (220 feet) wide, and has been connected with bridges to both sides of the river since antiquity. Being a seat of the ancient temple of Asclepius and later a hospital, the island is associated with medicine and healing. The Fatebenefratelli Hospital founded in the 16th century, and the Basilica of St. Bartholomew on the Island dating from the 10th century are located on the island. An ice cream was in order. 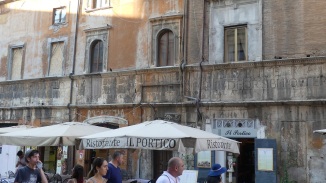 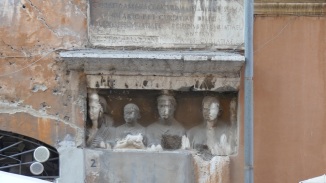 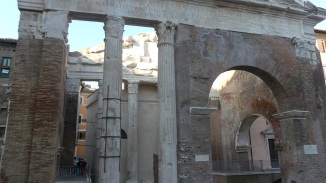 We kept our tour appointment. We had about 20 mins to reacquaint ourselves with the segway. Then we started our tour with a mixture of six other tourists all from the USA. The sun was settling into the horizon and the lights of the city rising. But my camera battery gave up the ghost just as we arrived at the first stop. It turned out to be unscheduled to allow some late comers to join us. I felt we could not object. It was a brilliant tour spoilt somewhat by some novices who were not quick learners on the Segway. But to see the city in the cool of the evening travel the laneways full of shoppers cafes full of diners and see the lights from Capitoline Hill was all wonderful.

Details of the tour:

Campo de’ Fiori and its several bars and restaurants. Then we head for the river to arrive at Castel Sant’Angelo, the former Mausoleum of Hadrian, used in many different ways over the centuries. From the Angels’ bridge to an amazing night view of St. Peter’s Basilica  (The Vatican). Next stop is the Piazza Navona with the stunning Bernini’s Fountain of the Four Rivers, also inspiration for the construction of the Trevi fountain. Over to the Pantheon – the majestic ancient temple devoted to all the gods, passing by the Temple of Hadrian and finally reaching the Trevi Fountain. Seeing the Trevi Fountain at night is something you will never forget. The next stop Piazza Venezia with the imposing Vittoriano. Thereafter we zip through the ancient Capitoline Hill, for a last view of the ancient city from above, and return to the office at Piazza Mattei (Turtle Fountain).

Our little pub in Piazza Mattei was closed. Fortunately our accommodation was well located and across the road we found an Irish Pub for dinner that evening (our pub at the Turtle fountain was closed for some reason). The pub was full of antiques including bicycles motor scooter and cameras.