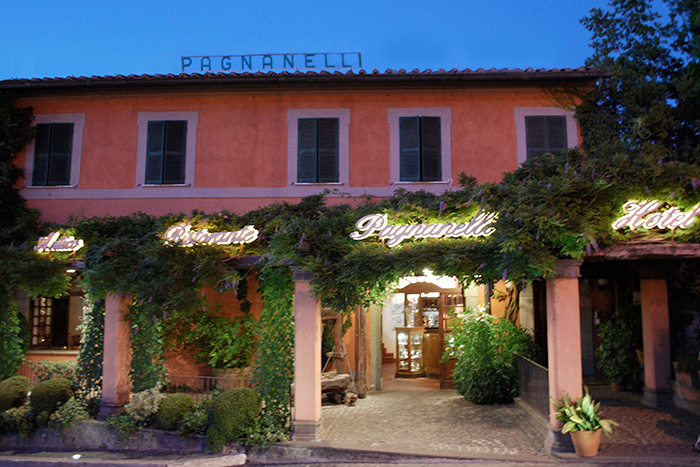 The highlight of our trip occurred on the 13th August when we visited the Pope’s summer palace at Castel Gandolfo. Coincidentally it was also the anniversary of our wedding. We had decided to celebrate with lunch at Antico Ristorante Paginanelli which is outside of Castel Gandolfo.

Castel Gandolfo is a town located 25 kilometres southeast of Rome. It is situated on Largo (Lake) Albano which to me looks like an old caldera filled with water as the village and castle of Castel Gandolfo is over 600m up the side of the lake.

To get to Castel Gandolfo we decided on the train but we had no idea what we would encounter nor how we would get up the hill from the station to the Restaurant and Pope’s residence. Fortunately for us just a few train stations short of the castle stop in Albano, the train line was under repair and for the last leg of our trip we were bussed to the town high above Lake Albano and not the rail terminus.

Occupying the top of the Alban Hills overlooking Lake Albano, Castel Gandolfo has a population of approximately 8,900 residents and is considered one of Italy’s most scenic towns.  The resort community includes almost the whole coastline of Largo (Lake) Albano which is surrounded by many summer residences, villas, and cottages built during the 17th century. It houses the Stadio Olimpico that staged the rowing events during the Rome Olympics. Castel Gandolfo has several places of archaeological interest including the Emissario del Lago Albano and the remains of the Villa of Domitian. 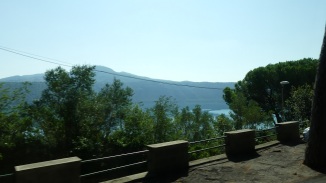 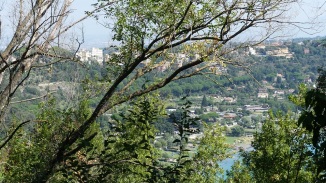 The bus dropped us off and we were left wondering where to from there, but a little investigation uncovered Antico Ristorante Pagnanelli, our ultimate destination. Nearby we noticed a road way climbing along the face of the valley with dramatic views of the lake.

At the end of the road is Castel Gandolfo (the village) and at the end of the village square – the Palace. Within the town’s boundaries lies the Apostolic Palace of Castel Gandolfo which served as a summer residence and vacation retreat for the Pope. Although the palace is located within the borders of Castel Gandolfo, it has extraterritorial status as one of the properties of the Holy See and is not under Italian jurisdiction. It is now open as a museum. The day we visited a group of nuns was also visiting which seemed a little odd that they were tourists and not part of the palace or a least the church. 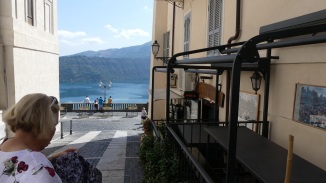 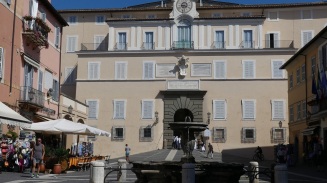 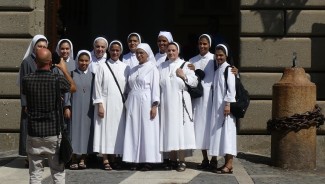 We entered through a side entrance and looked back to the square of the village. Inside the palace courtyard is part of the Pope’s motor vehicle stable. Above us the Pope would stand and address the villagers and conduct Mass. Our online enquiries about tickets to visit the Palace suggested that we could only visit as part of a tour at a cost of 250 euros each but for 19 euros we got tickets to explore the palace/museum.

The oldest parts of the castle date back to the 13th century. It was acquired by the Vatican in 1596 when the Savelli family, who owned it, were unable to pay a debt to the Papacy. The gardens occupy the site of a residence of the Roman Emperor Domitian. The palace was built for Pope Urban VIII. Popes have used the properties as a summer residence and vacation retreat, except for the years between 1870 and 1929 when the Popes, were in dispute with Italy over territorial claims, and did not leave Vatican City. Pope Pius XI had the facilities modernised and began using the retreat again in 1934. In accordance with the Lateran Treaty of 1929, the palace and the adjoining Villa Barberini added to the complex by Pope Pius XI are extraterritorial properties of the Holy See.  The palace has been a museum since 2016. The first floor holds many of the vestments of past Popes and displays of ceremonies of the Church. In addition portraits of every Pope from the time of the Savelli family (one of the Savellis had held the office of Pope) was displayed along with the official Vatican history of the Pope. Not all of them were saints in my view. The Savelli crest has been absorbed into the Palace crest which appear on the ceiling and pottery (chamber pot in this instance). Of course there are priceless pieces of art and sculpture throughout but the statue of Don Quixote caught my eye as it stared at the timeless stunning scenery out the window. As we passed through the Papal bedroom I was amused that the Papal bed was a single bed but on reflection that is all he needed – probably the only thing that did not suggest excess and opulence. 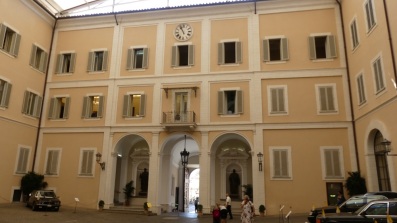 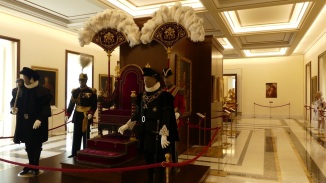 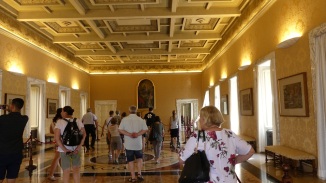 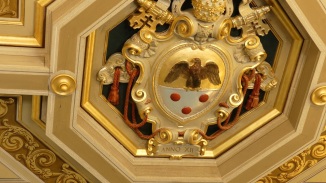 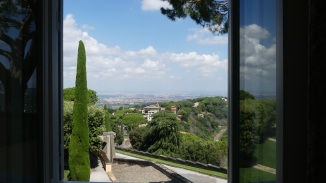 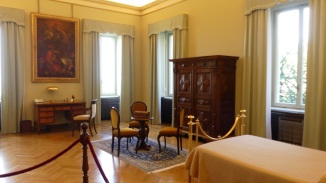 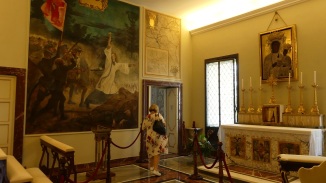 We exited onto the village square and we wandered through to return to the road that would take us back along the ridge to Antico Ristorante Pagnanelli. 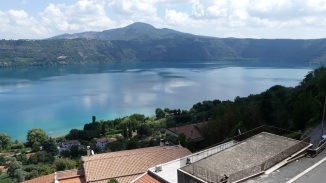 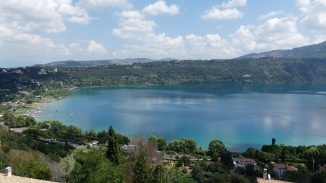 Opened by Giovanni Pagnanelli in 1882 the restaurant has been in the ownership of the same family for 4 generations. When we arrived we were greeted by a very Australian nona who it turned out is the wife of the current owner (met her husband on the beaches of Largo Albano married had 3 children and a restaurant). We positioned ourselves on the Terrace over looking the lake and settled in to a most enjoyable lunch with a bottle of Pol Roger (yummy – aged and honey over tones very dry) 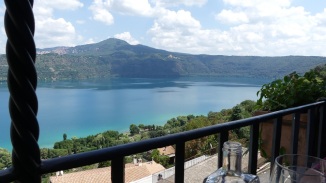 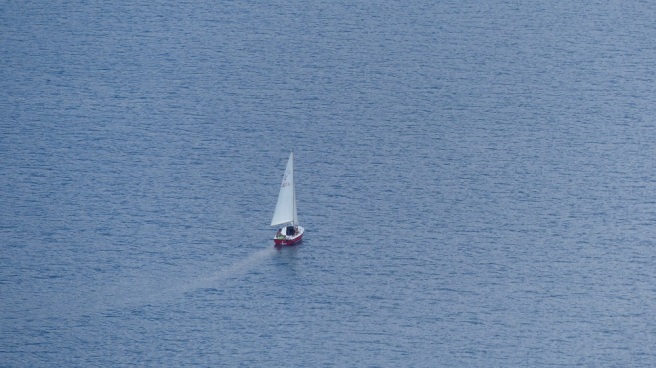 The menu was individual and we slowly grazed through 3 course and our bottle of Pol Roger. The whole experience was very memorable topped off by a visit to the cellar. As we were departing Kerry asked if we could see the cellar. Sure no problem. We were shown the stair case and told to hold the rope as we went down. That was it we had been given the keys to the most extensive cellar I have seen. The photos follow and some of the wines would have to be decades old. As we descended we passed displays of all sorts of instruments for opening wine or harvesting grapes then row upon row of ancient bottles some even signed by past visitors – Keneau Reeves being one. 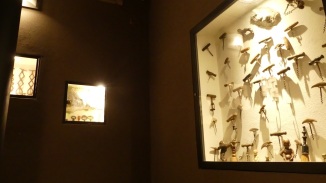 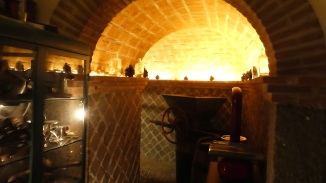 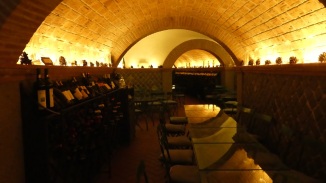 After lunch we waited for the next bus which took us only as far as the train station back to Terminii and a long walk to Via Natizonali.

How do we match that day? A memorable 30th anniversary leaving me to wonder how we improve for the next milestone.