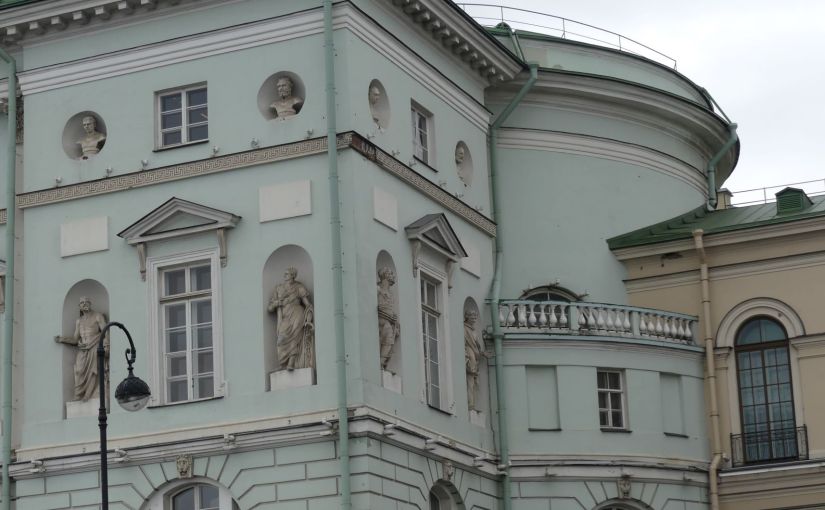 St Petersburg is just around the corner from Helsinki at the head of the Gulf of Finland. Russia’s second-largest city after Moscow, with 5 million inhabitants in 2012, is an important Russian port on the Baltic Sea. It is situated on the Neva River, and was founded by Tsar Peter the Great in 1703. Saint Petersburg has been the capital of Imperial Russia until 1918, when the central government bodies moved to Moscow.

It is often considered Russia’s cultural capital. The Historic Centre of Saint Petersburg and Related Groups of Monuments constitute a UNESCO World Heritage Site. Saint Petersburg is home to the Hermitage, one of the largest art museums in the world. Many foreign consulates, international corporations, banks and businesses have offices in Saint Petersburg so it is an interesting place to visit.

We had been here in 2007 to undertake a canal tour to Moscow through Lake Ladoga and down the Volga. So we had done the Winter Palace, the Hermitage, Peterhoff and a few other things and wanted to do something a little more Russian rather than tourist.

We had previously arrived by plane but this time our arrival by cruise ship surprised us with the size of the new cruise terminal, the reclaimed land yet to be built on and the new monumental buildings on the skyline. Whilst we were taking in the vista we noticed a freighter along side and I guessed this was refuelling as it hung around all day. We also found these strange balls on tees on the highest deck on the ship. Remember I mentioned the medallions issued to us at boarding; well these are the tracking devices monitoring every medallion on ship and recording everything the medallion wearer does as well as identifying the medallion wearer to open his cabin charge his account etc. 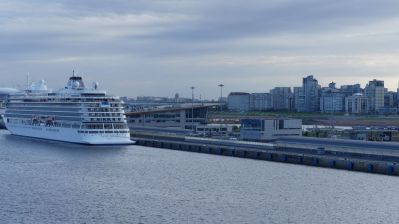 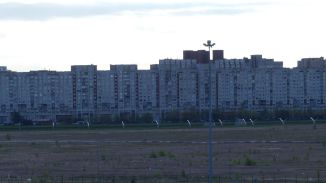 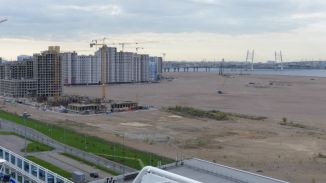 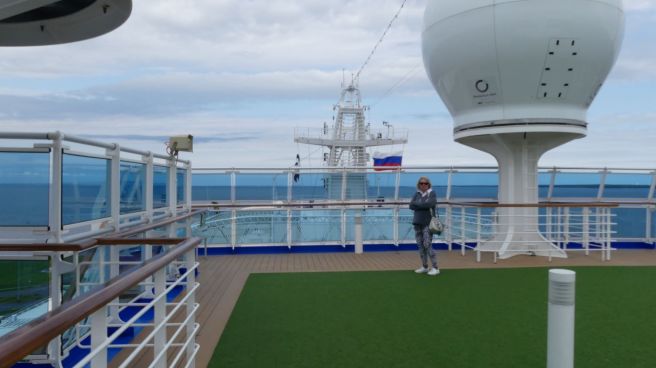 We had selected a canal cruise for todays excursion. Peter the Great had lived in the Netherlands doing an apprenticeship in  ship building which gave him the knowledge when later as Tzar he built the port of St Petersburg. Hence he had copied the Dutch and their use of canals. We left the ship but found that the customs officers were on a break so we were unable to leave the ship and were left to wander aimlessly looking for a route to access our bus. When the officer returned he was somwaht indignant that we were concerned about missing our bus. As it turned out we had ample time to kick around in the Russian gift shops on the wharf – none today thanks!

Waiting for us outside were the tour buses looking like suckling pigs nussling the sow – that is a pretty big sow! All aboard the bus and off we go to find our canal boat. Round and round until we came to the Church of the Saviour of the Spilled Blood. One of the main sights of Saint Petersburg, it is erected on the site where political nihilists fatally wounded Emperor Alexander II in March 1881, the church was constructed between 1883 and 1907, funded by the imperial family. In the aftermath of the Russian Revolution, the church was ransacked and looted, badly damaging its interior. The Soviet government closed the church in 1932. During the Second World War when many people were starving due to the Siege of Leningrad, the church was used as a temporary morgue for those who died in combat and from starvation and illness. The church suffered significant damage. After the war, it was used as a warehouse for vegetables. In July 1970, management of the church passed to Saint Isaac’s Cathedral and it was used as a museum. The proceeds from the Cathedral funded the restoration of the church. It was reopened in August 1997, after 27 years of restoration, but has not been reconsecrated and does not function as a full-time place of worship. We stopped for 15minutes to get a picture of the “church” and 10 of those minutes were spent by the guide tracking down lost passengers. 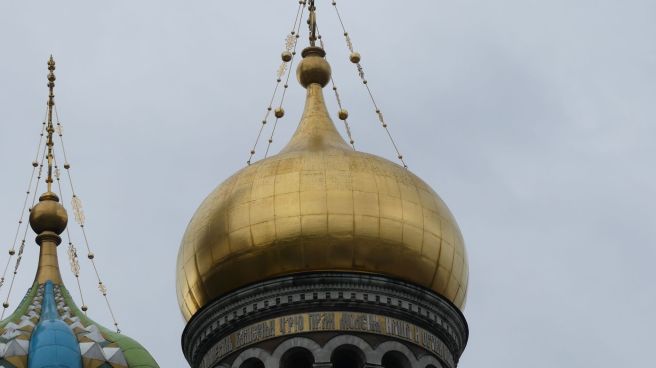 Following our stop at the Church we took a much more direct route to the canal and boarded our boat. The canal boat was not  flash but basic and rudimentary in many ways.  We cruised out into the Neva to see St Petersburg from the water. The city has many historic buildings, universities, archane lighthouses ( for the traffic on the river), residences and decaying decadence. Not the best tour but looking back we were sheltered from the rain and able to sit down and take in the view. I took the following photos; 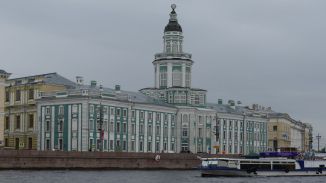 Our canal tour ended and we boarded our bus for the reutrn to the ship – oh no not before we visit the souvenir shop. Not just any shop but St Petersburg’s biggest! Our tour guide is paranoid about losing tourists so I check out with her about looking around outside rather than looking at the mind numbing tourist trinkets. She agreed and we bolt for the outdoors and find ourselves in the suburbs with a mall stretching away from us. At the commencement of the mall is a pink and grey cathedral with a maroon church beside it. These are the places of worship for the citizens of the suburbs and whilst plain when measured against the tourist sites, interesting in their own right.

After viewing the cathedral and the church we walked down the mall just looking at everyday people going about everyday business. Our tour guide had asked us to be back in 30 mins so we turned around and returned to the souvenir shop to board the bus with the rest of our group who were loaded up with crap from the shop. Back to the ship and rest up for the night activities. I noticed the daily paper for the ship announced a folk group was the special entertainment in the auditorium. Hey we going off ship to see the same thing – how does that happen? Free on the ship or pay for an excursion – not happy Jan! 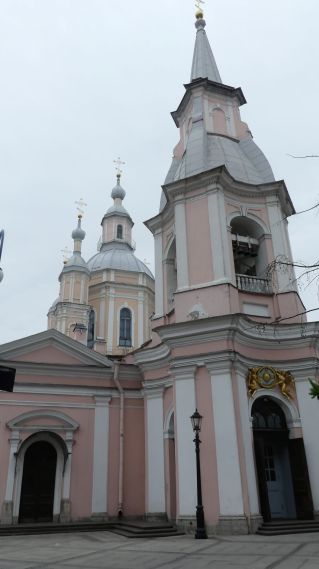 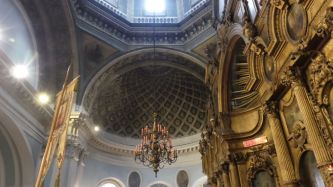 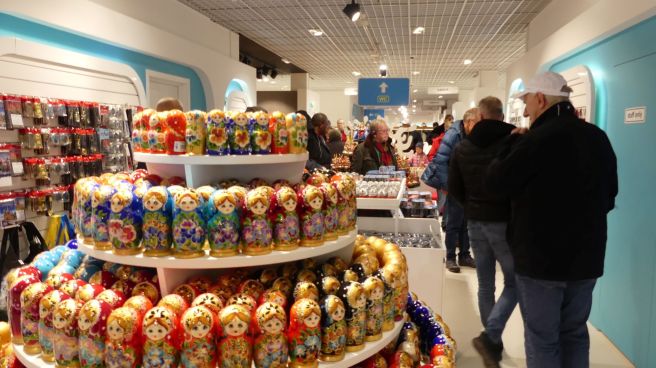