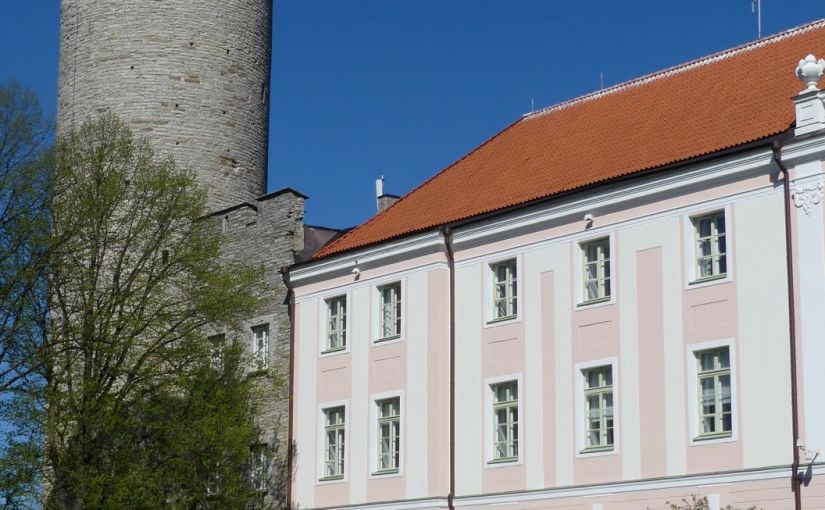 We have sailed from St Petersburg to Tallinn and in doing so we have picked up another “n” for Tallinn.

Tallinn is the capital, and the most populous city of Estonia. Located in the northern part of the country, on the shore of the Gulf of Finland of the Baltic Sea, it has a population of 434,562. It is a major financial, industrial, cultural, educational and research centre of Estonia. Tallinn is located 80 kilometres (50 mi) south of Helsinki, Finland, 320 kilometres (200 mi) west of Saint Petersburg, Russia, and 380 kilometres (240 mi) east of Stockholm, Sweden. It has close historical ties with these three cities. From the 13th century until the first half of the 20th century Tallinn was known in most of the world by its historical German name Reval.

The earliest human settlements date back 5,000 years with the  first recorded claim over the land laid by Denmark in 1219, followed by a period of alternating Scandinavian and Teutonic rulers. Due to its strategic location, the city became a major trade hub, especially from the 14th to the 16th century, when it grew in importance as part of the Hanseatic League. Tallinn’s Old Town is one of the best preserved medieval cities in Europe and is listed as a UNESCO World Heritage Site.

So when we anchored we (this occassion Rod and Kerry Hayes joined us) headed for the old city. We caught the bus but the trip was so short that our return was on foot. The bus driver gave us a helpful tip to get to the old city “straight ahead and turn right”. It was that easy so we were glad we had not forked out for an excursion from the ship.

Not long after leaving the helpful bus driver we did exactly as instructed and encounter an Adventist Church with a cobbled road leading us right into the old city. We passed an exotic backpackers hotel with the hire scooter chained to the fence, a witches den then the city gates. We wandered through the back streets imagining we were visiting a different time period. Our trip through the residences ended at the grand Hotel Barons and the city square opening before us. We passed a building with the most interesting door carved with wood reliefs and just beyound was the Polish Embassy with its Teutonic metal door.

Arriving at the town square we were surprised at how few people were there forgetting that the typical tourist does finish breakfast at the buffet until 10.00am. The Town Hall dominated the square.It has interesting rain water heads and the shackles for public floggings remain in place. 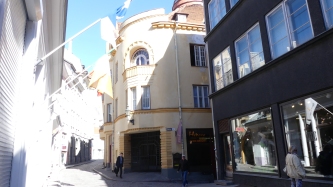 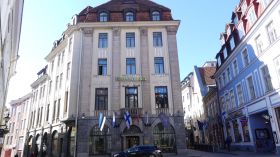 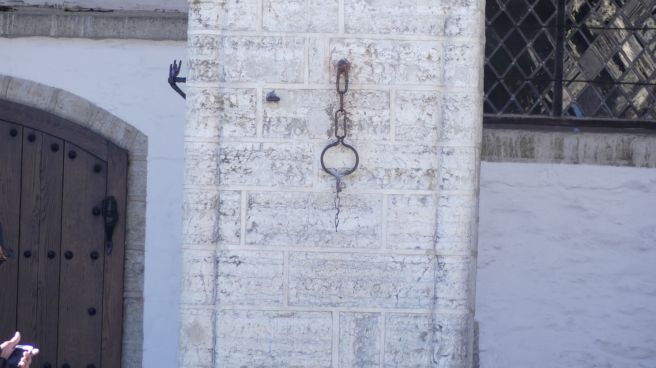 We had read that there was a castle on the hill above the old city the Parliament House and a grand cathedral so we made our way to the hill of Toompea. Through the city walls and up the hill to The Alexander Nevsky Cathedral (Estonian: Aleksander Nevski katedraal). It was built  in a typical Russian Revival style between 1894 and 1900, during the period when the country was part of the Russian Empire. The Alexander Nevsky Cathedral is Tallinn’s largest and grandest orthodox cupola cathedral. The Cathedral crowns the hill of Toompea. As the USSR was officially non-religious, many churches including this cathedral were left to decline. The church has been meticulously restored since Estonia regained independence from the Soviet Union in 1991.

We tried to visit the Parliament but it was not open except for school trips. We also saw the remains of the castle (one tower) and some of its walls. 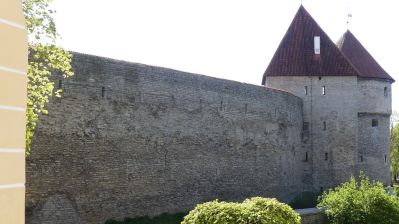 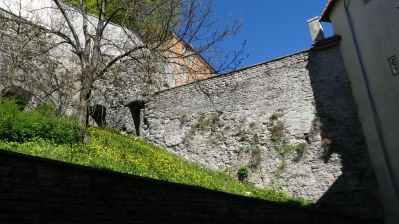 We walked on past the Parliament shop (yes a souvenir shop for Parliament), and found a pretty little park jammed in between the historical buildings atop Toomea Hill. The historical buildings have some interesting features the most surprising being a sculptural relief on the street frontage of the building commenorating an important person of history.

Leaving Toomea Hill we walked down to the town square once more looking for lunch. We found the Raeapteek.

The Raeapteek is opposite the Town Hall, at house number 11. It is one of the oldest continuously running pharmacies in Europe, having always been in business in the same house since the early 15th century. It is also the oldest commercial enterprise and the oldest medical establishment in Tallinn.

The first known image of the Town-Hall Pharmacy is an oil painting by Oldekop, showing Tallinn’s Town Hall Square in 1800. The first photos of the building date from 1889. Of course we had to have a look. It is a combination of pharmacy and museum. 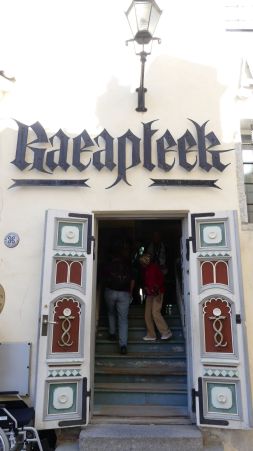 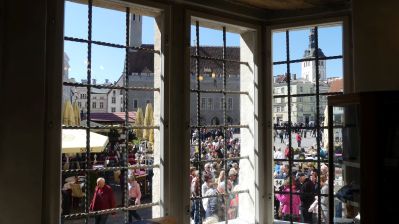 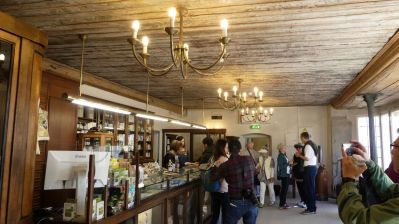 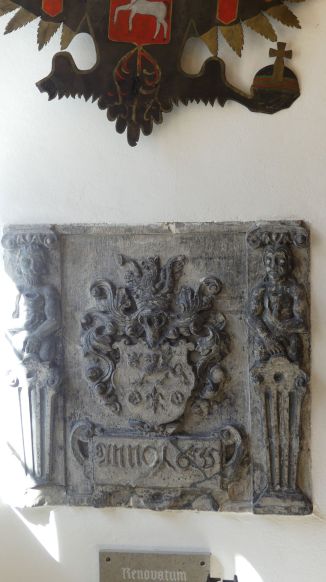 Looking through the window of the Raeapteek we could see the crowds swelling with lunchtime tourists, so we sought a quite little cavern of a place for a bite to eat. It was dark and the floor made of rough stone with only one lavatory services a multitude. It turned out that this was the back of a restaurant facing onto the square and hungary tourists were flooding in from there. Nevertheless we enjoyed lunch followed by a visit to another town square eatery for a cold beer and the use of their bathrooms.

We then ventured down a lane and into an artisans lane one side of which held the head stones removed from an old cemetery. 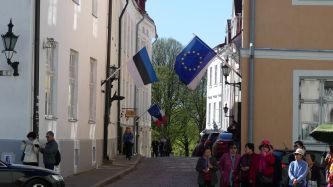 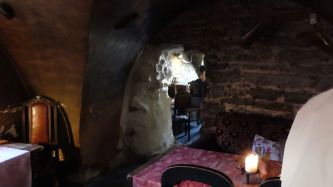 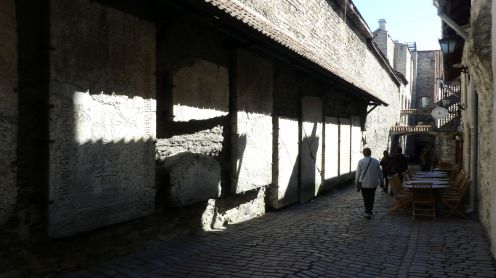 We had passed some of the city walls with ticket offices charging for entry into the tower rooms and the city walk atop the walls. I could not resist. We entered and climbed through rooms to the walk and traversed the walls as far as they remained in tact. If you look closely at photo 5 you may mistake the well for a lavatory. 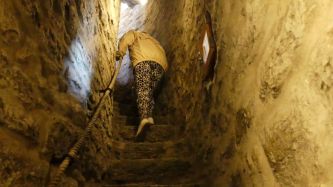 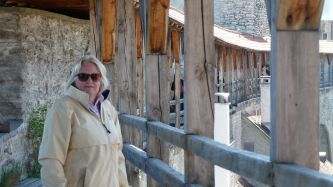 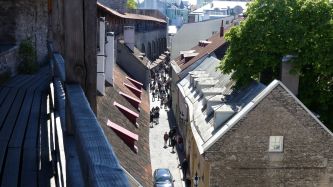 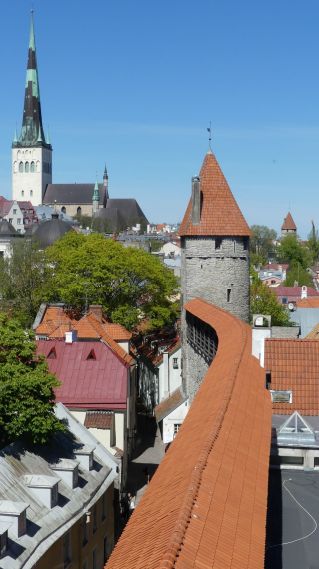 After walking the walls we decided to call it a day and walk back to the ship seeing more of modern Tallinn. A very relaxed walk backpast the exterior of the city walls and onto the ships. Each of these ships carries about 3500 passengers and this day there were 3 ships regurgitating tourists int the old town. Thats a bit of commerce right there. Soon after returning we set sail for Warnemunde Germany gaining some great views of the harbour and its visitors.