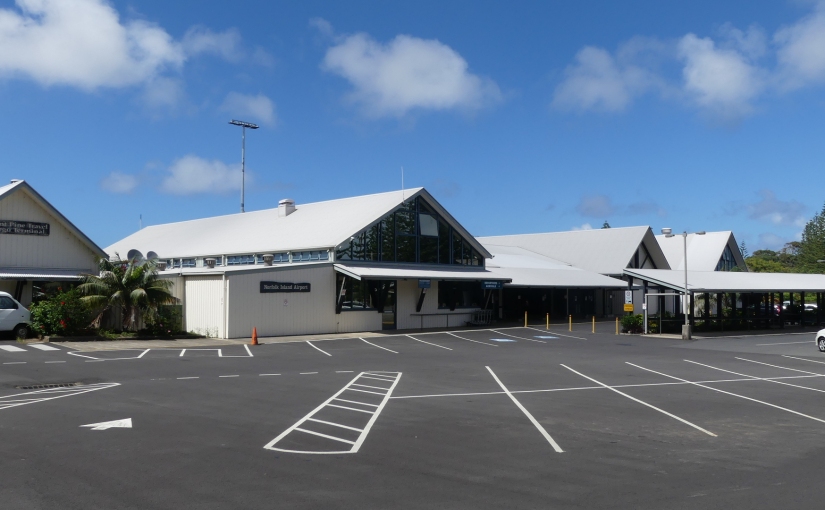 Good news we will fly home tomorrow via Qantas – good old Qantas to the rescue. Some further good news a local Kingfisher has stopped for a rest in the yard below us. The neighbours who arrived Wednesday and are here for bird watching and getting very excited of portents to come.

So, time for a swim at Emily Beach, a walk to Lone Pine, a walk through the Pitcairn Islanders Village (which is closed of course), and various other things to fill our day.

Emily Beach is the preferred swimming beach for the Island. Sheltered with a sandy beach and tucked up in front of the Polynesian ruins and beside Kingston, it is the choice of most locals. The school ran a carnival that day and all the kids appeared excited – a day off school at the beach. The water was nice and clear, the sand a little more course than the Gold Coast and shallow with out wave action because of the bordering stone benches stopping the waves.

Beside the beach the headland reaches out to Nepean Island and beyond Phillip Island both uninhabited. On this headland is a lone pine tree and hence the name nothing to do with the Dardanelles and the WW1 campaign at Gallipoli. On the other side of Emily Bay is Slaughter Bay and the Sirius monument. HMS Sirius was the flagship of the First Fleet, which set out from Portsmouth, England, in 1787 to establish the first European colony in New South Wales. In 1790, the ship was wrecked on the reef, south east of Kingston Pier, in Slaughter Bay, Norfolk Island and this monument identifies the spot.

Behind the monument is Norfolk Island’s historic Government House—built in 1829 and handsomely restored—is generally not open to the public. It is now the Administrator’s residence. Whilst we are down this way we go to Bloody Bridge and check on the progress of the baby Tropic Bird. Its doing really well.

We drive around to the Pitcairn Islander Historic Village principally to see if we can get lunch at this restaurant that never seemed to be open and when it did, we could not get a table. It was not open, so we walked through Queen Victoria’s Gardens adjoining the restaurant and then to the Village which was also closed but we were taken by the colourful and large hibiscus bushes.

The day is coming to an end, so we look at the map to see where we have not been. Marsh’s Rd at Ball Bay stands out. We determine to check on the red tail tropic bird at the foot of the huge pine tree on our way there and sure enough he’s there and growing quickly.

The map does not identify anything significant at Ball Bay, but we have time to kill and drive to Ball Bay. Here we find the port where petroleum is brought to shore, not by a pier or a tender but by an underwater pipe pumped directly into tanks on shore.

Farewell to Norfolk from the terminal. We enjoyed the break, and it was something I had on my bucket list to do. I am certain I would return but the slowness of life on the island would not suit Kerry at all.