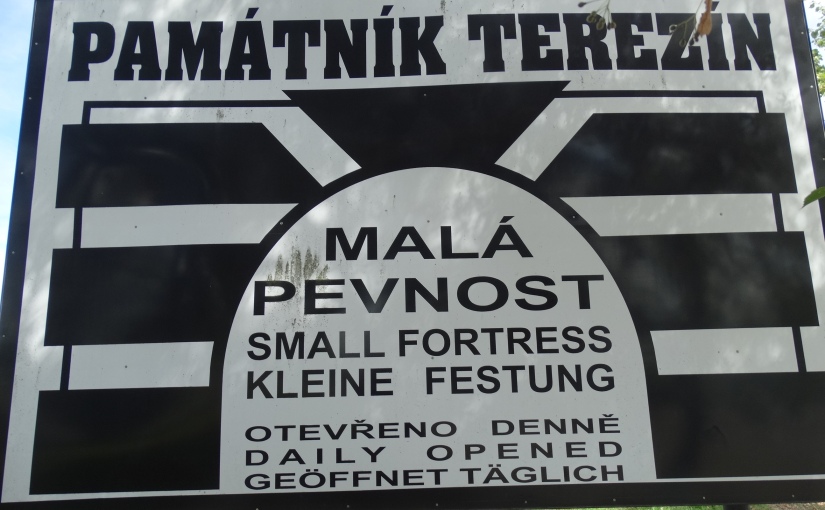 Our tour ends at the castle so we make our way to a restaurant for lunch then we pick up the tour to Terezin Internment camp. It is advertised as a “Concentration Camp” but in fact it was part of the chain but not a place where they gassed masses of people. The Nazi regime planned to exterminate the Jews of Europe and to gather them together they prepared Jewish settlements (Ghettos) and gave them autonomy and then slowly they were transferred to internment camps like Terezin and finally to the true Concentration camps like Auschwitz, Treblinka and Dachau. Don’t get me wrong Terezin (Little fort) was no resort and Terezin Ghetto (autonomous village) was not a picnic either.

Terezin was built as a fort to defend the borders against Prussian invaders and when they did not invade it became a prison and when the Nazis declared the Protectorate and took control of the country it became part of the final solution: holding Jews and political prisoners for transportation. When arriving at the fort you are met by Christian and Jewish graves but these are the people who died there because of the conditions not executions. Some executions by firing squad and hanging did take place but not to the extent of true Concentration camps. Here is what Wikipedia says;

Tens of thousands of people died there, some killed outright and others dying from malnutrition and disease. More than 150,000 other persons (including tens of thousands of children) were held there for months or years, before being sent by rail transports to their deaths at Treblinka and Auschwitz extermination camps in occupied Poland, as well as to smaller camps elsewhere.”

The entrance and the graveyard. 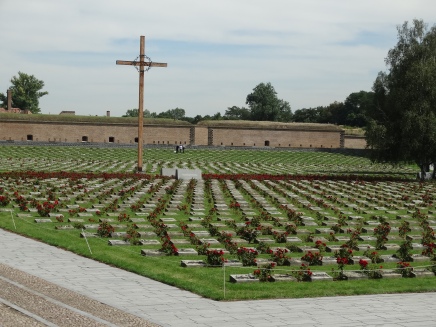 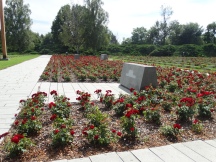 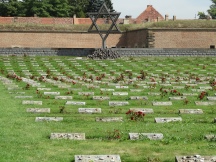 The gate to the prison and the prison yards beyond, the barracks and the solitary confinement cells, the delousing room and the shower. From 1914 until 1918,Gavrilo Princip was imprisoned here, after his conviction for the assassination of Archduke Franz Ferdinand of Austria and his wife on June 28, 1914, a catalyst for World War I. Princip died in Cell Number 1 (photo below) from tuberculosis on April 28, 1918.

Then we came to the mortuary rooms between which was an entrance to a tunnel under the fort used for defensive purposes and closed during the Nazi occupation.

At the end of the tunnel was the wall used by the firing squad and the gallows. In the yard was this monument to the people who died of starvation and disease. Mass graves were found containing the bodies of executed people and there is a monument to them also. The women’s quarters had the mistaken appearance of being more comfortable (natural light and two toilets) but they held 600 hundred women in the cell pictured. 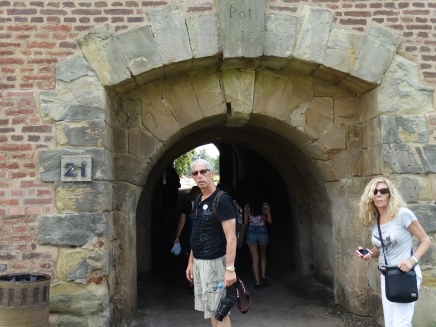 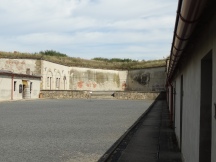 We then travelled to Terezin Ghetto which looks rather pleasant today but was every bit a torture camp as those with barb wire and dogs. We went to the crematorium and the graves around it. A Russian Jew donated this stone for the memorial as a symbol of oppression. Many of the graves had pebbles laid upon them (even the monument had them). Jewish people leave these tokens when they visit the grave. We then went back into the village to the museum of the ten thousand children who were imprisoned there, died there or were eventually transported to extermination centres. It was too sad for words and whilst we were both interested and we were extremely glad to get out.

Dinner that night was something special. In the old town, down an alley and beside what appeared to be an abandoned church, we found Mikes. Despite the name it is a traditional Czech pub serving Czech beer in big steins and traditional Czech food. Throughout the evening where were entertained by a musical trio; double bass accordion and violin. Magical moments to be remembered. No, no pictures, not at the table please.

I did gain a photo of Mikes the next day. 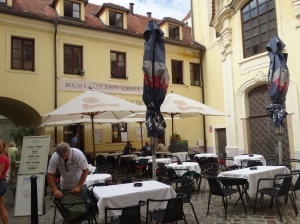