Boxing Day started with a dense fog which overnight had settled over the Charente-Maritime and we were hoping to visit La Rochelle and Ile de Re. However Terri assured us that more than likely it would be clear on the coast. So we loaded up the esky with a Xmas leftover picnic and sailed off to La Rochelle. We chose to pass through Surgeres rather than the freeway into La Rochelle thus wetting the girls appetite to do shopping in the old village.

We parked on the waterfront under the old city walls, then walked through the old harbour entrance into this famous maritime city of France and at times England. The history and its influence are astounding for a city few people I know are even aware it exists. 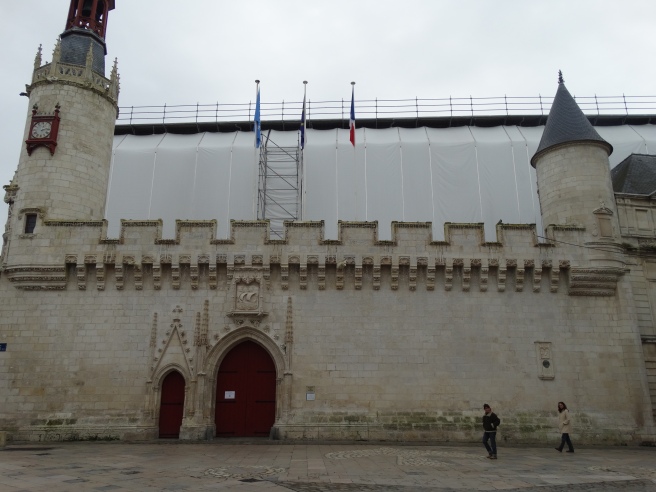 The old city is very unique with its covered footpaths and the remains of medieval fortifications and modern submarine pens built by the Germans during WWII still visible. I have extracted from Wikipedia the history of the city and set it out below for those interested. For those not interested I have posted some photos which I hope give you some idea of the quaintness of this place and its seaward region of Ile de Re. More on the island in another blog. 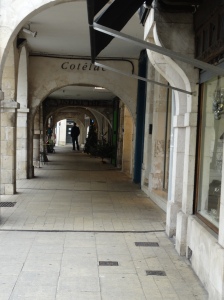 La Rochelle was one of the centres for Huguenots and therefore involved in the Religious Wars in France and I found a Protestant Church which has survived those  Wars. The waterside quays remain and are frequently adorned with markets and the lighthouse located in one of the main streets also remains and is operating.. 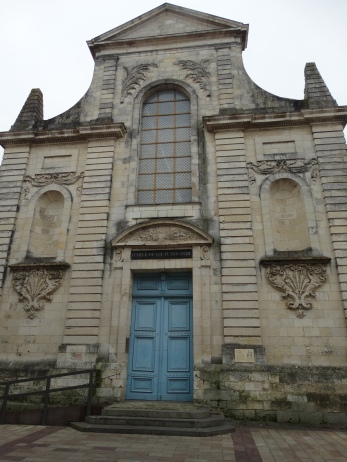 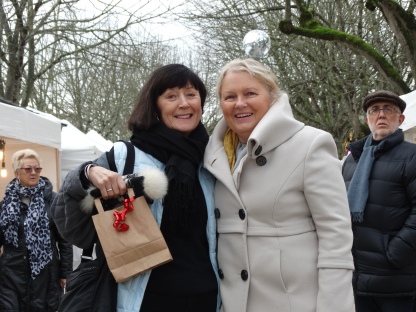 La Rochelle is a city in western France and a seaport on the Bay of Biscay, a part of the Atlantic Ocean. It is the capital of the Charente-Maritime department. The city is connected to the Île de Ré by a 2.9 kilometres (1.8 miles) bridge. Its harbour opens into a protected strait, the Pertuis d’Antioche.

The area of La Rochelle was occupied in antiquity by the Gallic tribe of the Santones, who gave their name to the nearby region of Saintonge and the city of Saintes. The Romans then occupied the area, Roman villas have been found at Saint-Éloi and at Les Minimes, as well as salt evaporation ponds dating from the same period. La Rochelle was founded during the 10th century and became an important harbour in the 12th century.

Eleanor married Henry Plantagenet in 1152, who became king of England as Henry II in 1154, thus putting La Rochelle under Plantagenet rule, until Louis VIII captured it in the 1224 Siege of La Rochelle. The Knights Templar had a strong presence in La Rochelle since before the time of Eleanor of Aquitaine.

During the Hundred Years’ War in 1360, La Rochelle again became English. La Rochelle however expelled the English in June 1372, following the naval Battle of La Rochelle. In 1402, the French adventurer Jean de Béthencourt left La Rochelle and sailed along the coast of Morocco to conquer the Canary Islands. Until the 15th century, La Rochelle was to be the largest French harbour on the Atlantic coast.

During the Renaissance, La Rochelle adopted Protestant ideas. An early result of this was the burning at the stake of two “heretics” in La Rochelle in 1552. Conversions to Calvinism however continued, due to a change of religious beliefs, but also to a desire for political independence on the part of the local elite, and a popular opposition to royal expenses and requisitions in the building projects to fortify the coast against England. La Rochelle was the first French city, with Rouen, to experience iconoclastic riots in 1560. Protestants pillaged churches, destroyed images and statues, and also assassinated 13 Catholic priests in the Tower of the Lantern. From 1568, La Rochelle became a centre for the Huguenots, and the city declared itself an independent Reformed Republic on the model of Geneva. This led to numerous conflicts with the Catholic central government. The city supported the Protestant movement of William of Orange in the Netherlands, and from La Rochelle the Dutch under Louis of Nassau and the Sea Beggars were able to raid Spanish shipping.

In 1571 the city of La Rochelle suffered a naval blockade by the French Navy. The conflict ended with the 1573 Peace of La Rochelle, which restricted the Protestant worship to the three cities of Montauban, Nîmes and La Rochelle.

Louis XIII and his Chief Minister Cardinal Richelieu declared the suppression of the Huguenot revolt the first priority of the kingdom. The English came to the support of La Rochelle, starting an Anglo-French War (1627-1629), by sending a major expedition under the Duke of Buckingham. The expedition however ended in a fiasco for England and Cardinal Richelieu blockaded the city for 14 months, until the city surrendered and lost its mayor and its privileges. The remaining Protestants of La Rochelle suffered new persecutions, when 300 families were again expelled in November 1661, the year Louis XIV came to power.

The growing persecution of the Huguenots culminated with the Revocation of the Edict of Nantes by Louis XIV in 1685. Many Huguenots emigrated, founding such cities as New Rochelle in the vicinity of today’s New York in 1689. La Rochelle, and the siege of 1627 form much of the backdrop to the later chapters of Alexandre Dumas, père’s classic novel, The Three Musketeers.

In 1809, the Battle of the Basque Roads took place near La Rochelle, in which a British fleet defeated the French Atlantic Fleet. In 1864, the harbour of La Rochelle (area of the “Bassin à flot” behind the water locks), was the site for the maiden dive experiments of the first mechanically-powered submarine in the World, Plongeur, commanded by Marie-Joseph-Camille Doré, a native of La Rochelle.

During the Second World War, Germany established a submarine naval base at La Pallice (the main port of La Rochelle). A German stronghold, La Rochelle was the last French city to be liberated at the end of the war. The Allied siege of La Rochelle took place between 12 September 1944, and 7 May 1945; the stronghold, including the islands of Ré and Oléron, was held by 20,000 German troops under a German vice-admiral Ernst Schirlitz. Following negotiations by the French Navy frigate captain Meyer, and the general German capitulation on 7 May, French troops entered La Rochelle on 8 May. (source Wikipedia)

So, what do you think? It astounds me that this rural port  and nearby Rochefort have been so influential. One thing further if you visit La Rochelle and the boat trips to Fort Boyard are running don’t miss the opportunity to visit it. Here is a fort built on a bank in the ocean –surrounded by water and only accessible by boat. Again a Wikipedia extract on its history follows:

Fort Boyard is a fort located between the Île-d’Aix and the Île d’Oléron in the Pertuis d’Antioche straits, on the west coast of France. Building started in 1801 and was completed in 1857.

The fortifications were completed in 1857, with sufficient room for a garrison of 250 men. However, by the time of its completion, the range of cannons had significantly increased, making the fort unnecessary for national defence. After 1871, Fort Boyard was briefly used as a military prison, before being abandoned at the beginning of the 20th century. In 1950 it was made a listed building, and in 1961 was sold to Charente Maritime Regional Council.