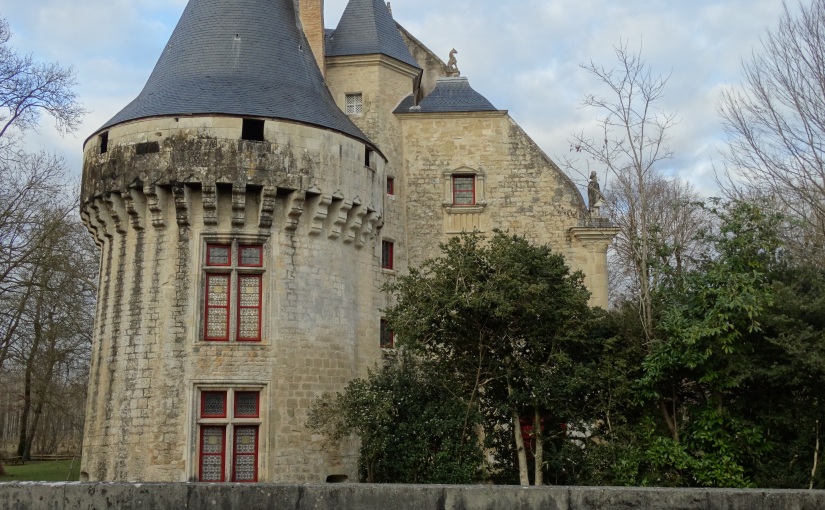 It is nearly Xmas so we leave Palaeolithic Lascaux and head for Dampierre sur Boutonne and my cousin’s gites where we will celebrate Xmas. The drive was long and tiresome. As planned we arrived at Dampierre on December 23 to a warm welcome and hot cuppa tea.

Thistle and the main building

We had been driving for most of the day so a stretch of the legs was in order. A brief walk to Chateau Dampierre then around to the church before having dinner did the trick. The chateau has a history dating back to the 10th century and if you want to read more go to http://fr.m.wikipedia.org/wiki/Château_de_Dampierre-sur-Boutonne. The chateau was partly destroyed by fire in 2002 and has recently been restored but is only open for visitors in the warmer months. 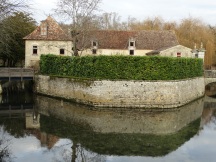 The village church is an interesting relic. It appears there was a church on this site from roman times and that it was later in the 12th century replaced by a Romanesque church which over the centuries has had many alterations and additions. It is standard in its layout (the cross running east west with a nave, transept and altar) and includes the town clock in its bell tower which appears to be added on to the main church building. Further you will see that some of the windows are gothic in shape and that a section of wall on the southern side has been replaced but the new wall does not exactly line up with the original.

It has never included a graveyard but the earth wall supporting the church grounds overlooking my cousin’s house has given up a skull, leg bones and other bits of human remain. When reported to the Marie of the town some explanation about many people being killed in the religious wars and these remains probably belong to that era was offered.

Wikipedia records the following about The French Wars of Religion (1562–98). “….. is the name of a period of civil infighting and military operations, primarily fought between French Catholics and Protestants (Huguenots). The conflict involved the factional disputes between the aristocratic houses of France, such as the House of Bourbon and House of Guise (Lorraine), and both sides received assistance from foreign sources.”

Seriously, these bones are sitting in dirt and now exposed to the weather – I don’t think these are left over from the 16th century, but the authorities were unconcerned so now it is up to Mick to cover them up again.

The next day we had to buy some provisions (including mistletoe and holly) so we travelled to St Jean D’Angeley as there are no grocery stores in Dampierre (500 people) and then back to our village and a walk down to the local pub (cafe restaurant and hotel of sorts) for a quick drink.

Then we had to lay in some provisions for Xmas day and Mick had to buy his lotto ticket, so we went to the Supermarche at Aulnay (another town nearby) and bought two 5 litre cartons of the local red and white plonk, two bottles of Mercier champagne and one bottle of the local “champagne style” sparkling wine. Whist there Mick showed us what was left of the Chateau at Aulnay. 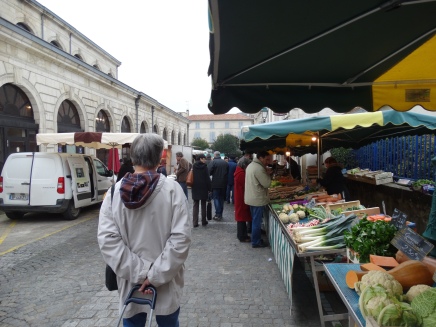 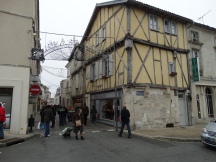 St Jean D’Angeley some of the earlier buildings