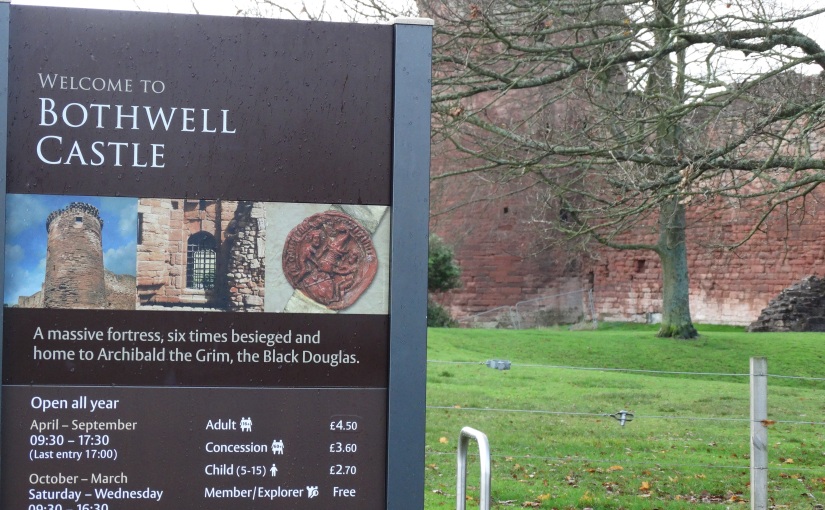 After resting in Perth, we had planned to visit Scone Palace on our way to York but as is often the case this time of the year it was closed for the winter so a quick change of plan and we visited Bothwell Castle.

Historic Bothwell Castle “is a large medieval castle sited on a high, steep bank, above a bend in the River Clyde, in South Lanarkshire, Scotland. It is located between Bothwell and Uddingston, about 10 miles (16 km) south-east of Glasgow. Construction of the castle was begun in the 13th century by the ancestors of Clan Murray, to guard a strategic crossing point of the Clyde. Bothwell played a key role in Scotland’s Wars of Independence, changing hands several times.

The huge cylindrical donjon was built in the 13th century, but before the rest of the castle was completed it was severely damaged in a series of sieges. Rebuilding in the early 15th century enlarged the castle, but it was abandoned by the 18th century. The present ruin is rectangular, with the remains of the donjon to the west, and the later Great Hall to the east. The courtyard is enclosed by long curtain walls, with round towers at the south-east and south-west corners.” (source Wikipedia) 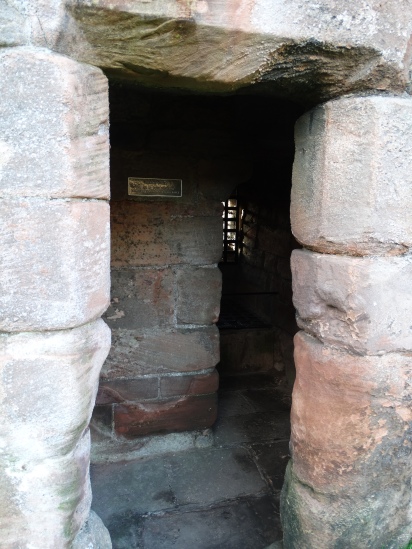 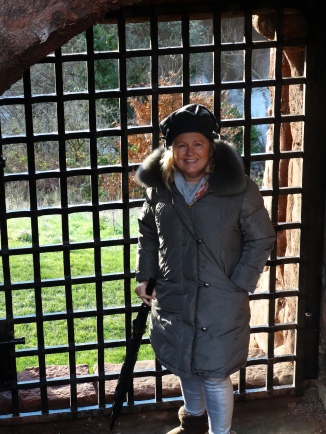 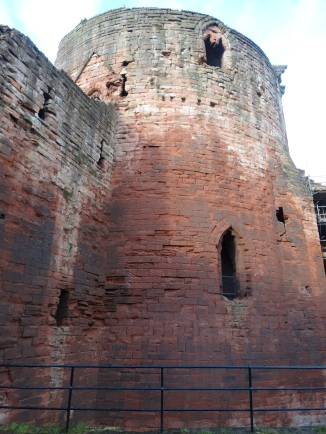 We had a little difficulty finding this site because of the surrounding residential development. However once you arrive it is immediately apparent that this edifice has had a tumultuous life. Parts of the former castle like the well and a watchtower – now only the footings remain, lie scattered in front of todays entrance  . Inside we met a very friendly and knowledgeable volunteer for the Scottish National Trust. We showed that we had some interest in the history and then he could not do enough for us right down to displaying for us chain mail, a two handed broad sword and the various arrow head used in the medieval period. If he had a trebuchet (early form of catapult) I am sure he would have rolled it out for us.

The main part of the remaining castle the donjon or keep was under maintenance so we could not go inside but we were able to tour around the court and our friendly custodian opened the basement so we could view a display of history cards and he told tales of the how the Scots prevented captured English Long Bow men from raising their fingers against Scotland ever again. They chopped them off (the bow fingers that is) giving a two fingered salute was how the English returned the compliment to the Scots and just as the salute is an insult today so it was in the 13th century sieges of Bothwell Castle.