Limoges is the capital of the Haute-Vienne department and the administrative capital of the Limousin région in west-central France. To reach this regional centre we had to drive through some of the prettiest of French countryside. After the wide green fields, scattered forests and freshly ploughed paddocks of Dampierre it was vastly different to be climbing through the Central Massif, its small villages and woodlands. We arrived in the middle of the day and our apartments are located in the centre of the city but no one told us that our neighbour was the Benedictine Rail Station (Gare de Limoges Bénédictins). This huge station had innumerable lines running through it and numerous passenger trains of up to 30 cars in length going all night.

The apartment was not immediately identifiable but when I did find it there was no reception just the number 13 and a key pad. Reviewing the email booking we found that we collected the keys from 13 A – down an alley between buildings in a shoe shop. Then we found that our host was not adept with English more so than we were not adept with French. After a lot of hand signals and repetition we worked out that our apartments were at the top of two flights of stairs and that we had been given bigger apartments at the same price.

The apartments were newly renovated and very large and stylish. However the timber floor had not been laid properly and it squeaked with every footstep. Apart from this annoying issue the apartments appeared luxurious. Settled in we took a trip to St. Leonards de Noblat. Saint-Léonard church is a UNESCO World Heritage Site part of the World Heritage Sites of the Routes of Santiago de Compostela in France. The day continued to be bitterly cold with gusting wind and barely noticeable snow flurries – Nerida and her prayers for snow. 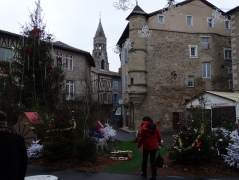 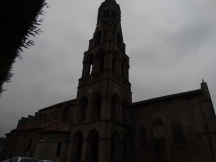 The village itself was interesting with its many narrow streets and ancient buildings but it was too cold to continue exploring on foot. So I charted a return journey through the area north of Limoges and Tommy found every goat track known to man for this journey. It was pretty country side and pretty hair raising at times.

Kerry had sought assistance with directions to our apartment from the owner of a kebab shop a few doors from our apartment. He did not speak English – he is a Turkish Kurd so he spoke Turk, Kurd, and French but no English. A customer translated and although it did not help we decided to try his Lamb Sandwich for dinner. Well it was simple tasty wholesome food at very little cost. We returned again the following night.

After dinner Kerry and I took a walk through the city centre for so long as we could withstand the cold before retiring for the night.