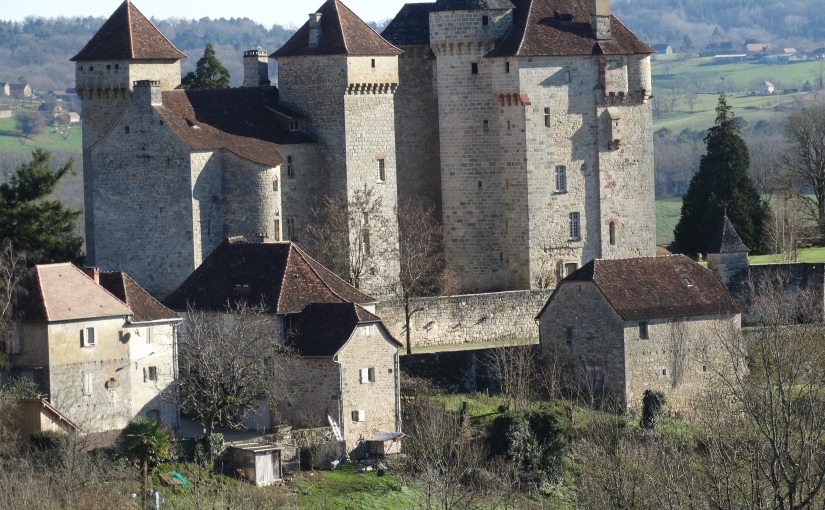 Before going to bed we strolled through a very cold Limoges and viewed an old cathedral sized building which we believe has been transformed into a museum. The next morning in Limoges saw the weather changed to sunshine and light winds but the chill was still in the air. We took an early morning walk to the rail station waiting for the Bishops to arise. Warmer gear would be the order of the day. 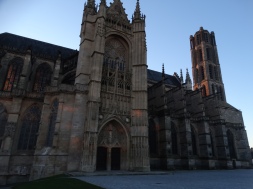 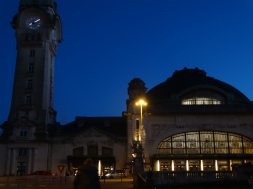 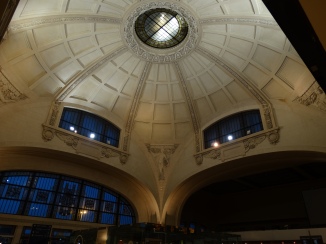 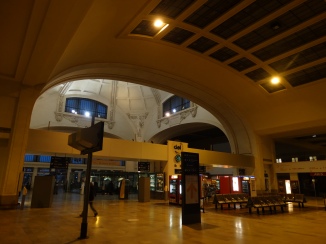 Our plan was to visit three villages all part of Les Plus Beaux Villages de France (The Most Beautiful Villages of France)- Collonge la Rouge, Curemonte and Turenne.

Collonges-la-Rouge is entirely built with red sandstone. Its existence is proven since the 8th century thanks to the donation of the count of Limoges of the parish to the monastery of Charroux. The village is actually where this association Les Plus Beaux Villages de France was created. 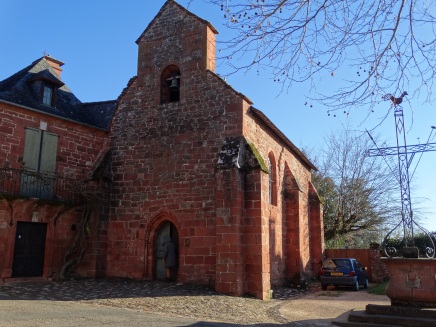 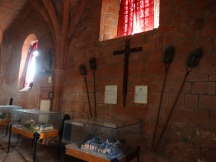 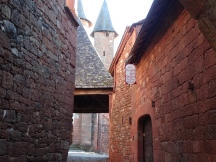 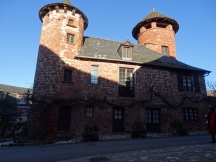 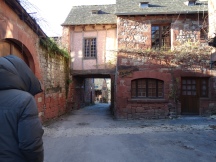 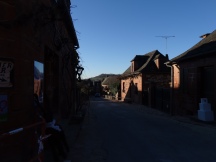 The Saint-Pierre church, dating from the 11th, 12th and 15th centuries, is one of the oldest of the Limousin region, and was fortified during the 16th-century French wars of religion. The whole church has been a historical monument since 4 April 1905.

The fortified wall of the village dates back to the 14th century. The doors of the ancient priory are listed as historical monuments.

Curemonte is a medieval village characterised by its three castles. In a fortified position on a ridge overlooking a valley on both its eastern and western flanks, the village has historically had a strategic importance in the area. When we drove into the village we were forced to park on a ridge opposite the village where we enjoyed a picnic lunch despite the chill wind. The day was glorious – mellow sunshine and clear blue skies illuminating this ancient stronghold. Walking through the village felt like a ghost town. I guess many of the residents are holiday visitors. The three towers are in private ownership and no visitors allowed. In the warmer months I suspect the place would be alive with tourists. I think we got to see the village at its best without the maddening throng. 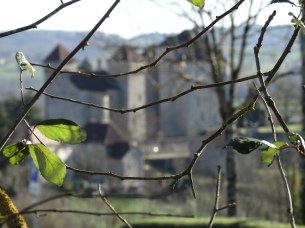 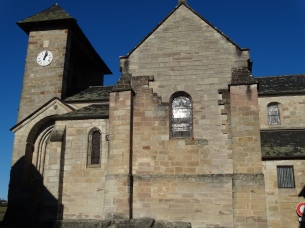 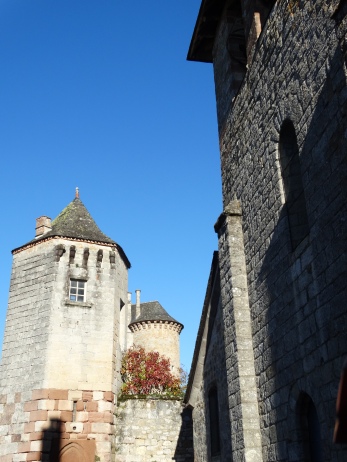 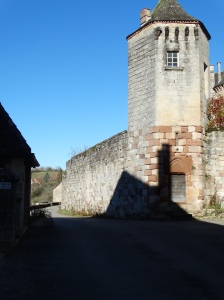 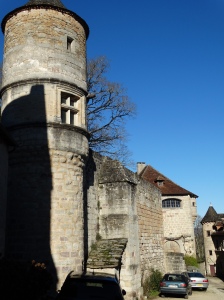 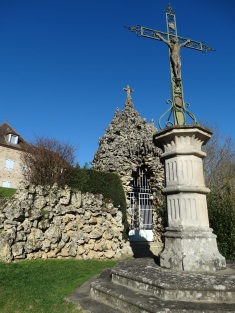 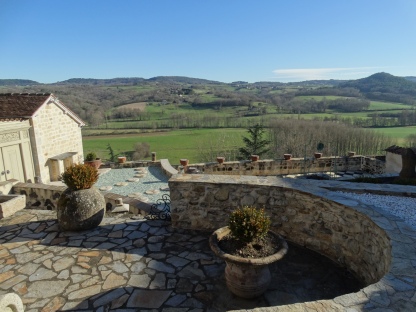 Turenne is a medieval village and castle characterised by its height and unique position on top of a cliff. The first lords of Turenne appeared in the 9th century. The town became a veritable feudal state after the Crusades and one of the great fiefs of France in the 14th century.

Turenne has seen a succession of four families of Viscounts. On 8 June 1738, Turenne was sold to Louis XV to pay the gambling debts of Charles Godfrey, the last of the Viscounts of La Tour d’Auvergne family. Thus ended the quasi-independence of this last French stronghold. The Viscounty’s subjects became subjects of Louis XV and were forced to pay taxes. The king also ordered the dismantling of the fortress of Turenne. As of the Revolution, Turenne was more like a seat of a royal provost.

We had some difficulty working out how best to gain access as the village sprawls up the side of a steep slope. I eventually just drove up risking the wrath of the locals but there was no objections until I wanted to come down when the no entry signs just had to be ignored if I was ever going to get Thistle out of there. Half way up was an interesting church – another Notre Dame.

The remains of the castle and there was not much was closed. However it was still magical wandering through the village and viewing the valleys below. I even found evidence of an abandoned archaeological dig in the basement of one of the houses. 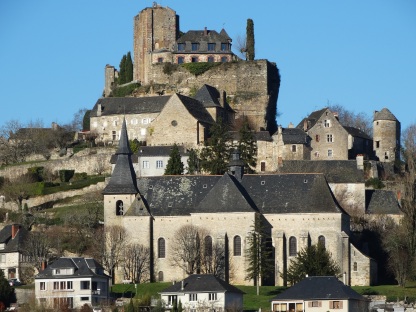 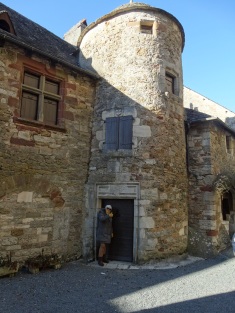 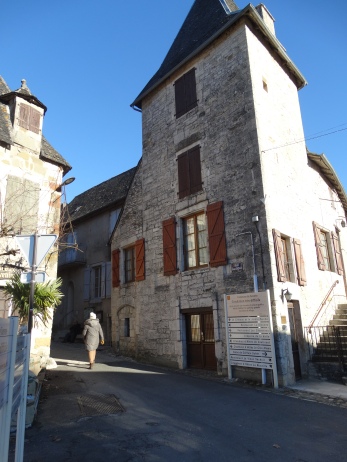 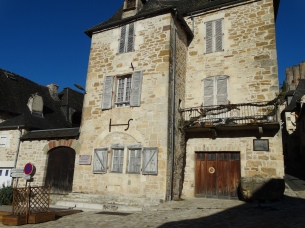 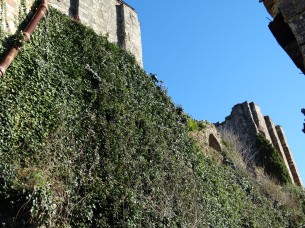 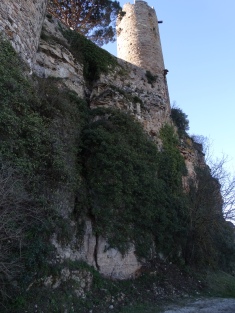 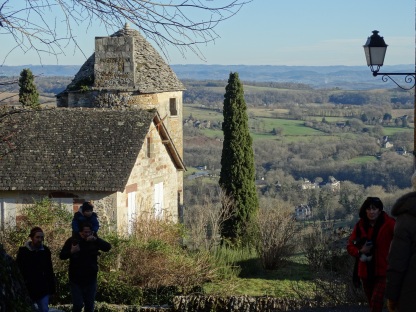 After navigating our way out of Turenne, we happened upon an old 11th century church under repair. It is apparently built on Roman foundations and therefore of historic interest. But it was not open which did not foil one intrepid member of our group. 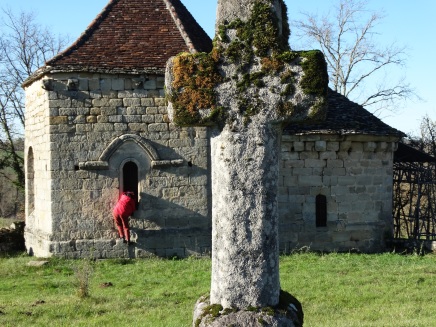 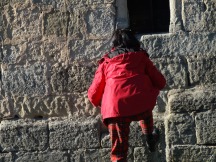 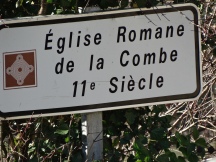 Throughout this trip Kerry was doing 90% of the driving with me navigating. The lovely sunshine was so out of the ordinary that the result was a severe headache for Kerry and an early night with take away lamb sandwiches.