“The Château de Castelnaud is a medieval fortress in the commune of Castelnaud-la-Chapelle, overlooking the Dordogne River in Périgord, southern France. It was erected to face its rival, the Château de Beynac. The oldest documents mentioning it date to the 13th century, when it figured in the Albigensian Crusade; its Cathar castellan was Bernard de Casnac. Simon de Montfort took the castle and installed a garrison; when it was retaken by Bernard, he hanged them all. During the Hundred Years’ War, the castellans of Castelnaud owed their allegiance to the Plantagenets, the sieurs de Beynac across the river, to the king of France. In later times it was abandoned bit by bit, until by the French Revolution it was a ruin. Today the picturesquely restored château, a private property open to the public, houses a much-visited museum of medieval warfare, featuring reconstructions of siege engines, mangonneaux, and trebuchets. The castle is listed as a monument historique by the French Ministry of Culture.” (Wikipedia) 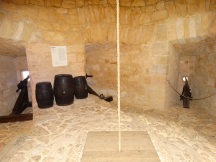 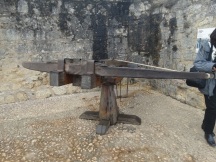 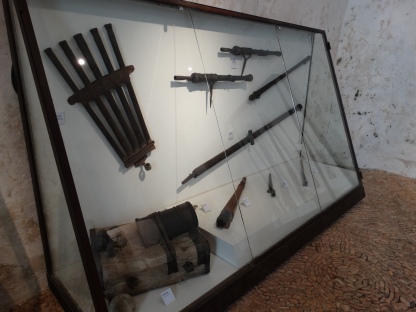 The day of our visit the weather was overcast and foggy so we could not fully enjoy the scenic views from the chateau nor the quaintness of the village below it. The chateau is a complete museum of medieval instruments of war particularly early catapults. We spent hours going through all the exhibits but be warned there is a lot of steps some very steep and narrow. It is no place for people with a disability or young children. 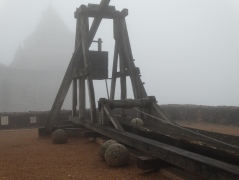 After our visit we travelled to the village of La Roque Gageac where the fog prevented us from enjoying the dramatic setting for this village. It sits under a ridge of vertical rock and apparently has caves behind it but we could only vaguely see the stairs in the wall leading to these caves. Some adventurers could be seen through the fog abseiling down the cliff face. We did explore a walk amongst the houses and found a subtropical garden hidden behind the houses.

We returned to Sarlat for our final night. We dined at a small restaurant in the old city. The weather was turning very cold and it was uncomfortable to walk around the city so we retired to our hotel as tomorrow we travel to Lascaux Caves and then onto Dampierre Sur Boutonne.