After a delightful lunch in the village at the foot of the chateau (there is another village of the same name below the chateau) we made our way into Sarlat just in time for the Xmas markets and tens of thousands of people (well thousands anyway) making finding the hotel and parking impossible. An eagle eyed Nerida spotted La Couleuvrine (named after the culverins on the town walls which walls now form part of the hotel).

We reconnoitred around the old city and what a fabulous place full of ancient buildings and the old ramparts still exist around 3/4 of the town. “Sarlat is a medieval town that developed around a large Benedictine abbey of Carolingian origin. The medieval Sarlat Cathedral is dedicated to Saint Sacerdos.” (Wikipedia) We found the Cathedral in the heart of the old city with a modern Xmas tree featuring in front of it. I don’t know which attracted more people – the Cathedral or the tree. There are examples of old architecture everywhere you look. Inside the Cathedral you are overwhelmed by the organ hanging over the front door. Outside it towers like the fortifications we had seen at Beynac.

The alleys and old buildings jump out at you drawing you to look at their antique features. Our hotel was an excellent example of the early architecture. But like most of these building converted to a modern use there are oddities such as the stairs to our rooms. Arriving on the first floor there were another 5 stairs to climb to the room and the same for the Bishops. 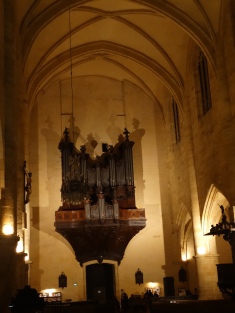 “Because modern history has largely passed it by, Sarlat has remained preserved and one of the towns most representative of 14th century France. It owes its current status on France’s Tentative List for future nomination as a UNESCO World Heritage site to the enthusiasm of writer, resistance fighter and politician André Malraux, who, as Minister of Culture (1960–1969), restored the town and many other sites of historic significance throughout France. The centre of the old town consists of impeccably restored stone buildings and is largely car-free.” (wikipedia)

This is an area of historical significance as the English and French fought over it for centuries and the religious conflicts between the French themselves saw this area figure prominently. Hence the numerous fortified chateaus on high bluffs. Chateau Castelnaud is another example (and it was open at this time of year – many are not).