One of the things we wanted to do was catch up with our old Long Eaton neighbour, Pam Fowler. Pam and her husband John lived across the hall from our flat 41 and we regularly met and they shared their knowledge of the counties with us to help our explorations. Just before we departed Long Eaton we took John for his last walk around the lake at the University of Nottingham. John was determined despite his ill health to do the circuit and enjoyed the outing very much. We returned to Australia and learned that shortly after John had died. Now we wanted to catch up with Pam and see how she was getting on.

We walked from the Novotel to Oxford St (about an hour walk) past one of the many garden beds full of spring flowers and there was Pam waiting at the gate for us to arrive. Pam had planned that we have lunch at Bennett’s Hotel, a site which had been under redevelopment for the whole of the time we were living in Long Eaton. The hotel has been renovated internally in a modern style and it has a simple menu for seniors like us. Lunch was very pleasant. We returned to Pam’s flat, flat 40 a very familiar scene for us from the myriad of visits we made to John and Pam. Over coffee we reminisced about John and Pam spoke of life after John. It appears that Pam has come to terms with John’s passing and is now comfortable living on her own. We will continue to keep in touch. 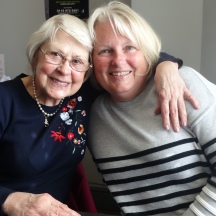 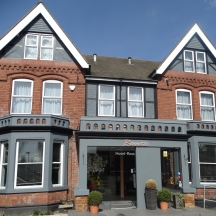 Monday evening is Rotary at Nottingham. Still meeting at the Crowne Plaza Hotel, we turned up for their AGM and surprised many of them despite having given notice to the Club Secretary. It was a great reunion and reminded us how supportive they were when we lived at Long Eaton. A surprise visitor (apart from us) was Eve Conway the RIBI President (Britain is the only country in the world where Rotary is administered outside of Chicago as a result of war time communication between Chicago and the UK being difficult during WWI). We posed for a photo with the Club dignitaries Paul Jones the President Elect on the left and Chris Spencer on the right the current President and Eve and it is posted on our Rotary website.

Tuesday, we visited Nick Smith at Direct Trimmings our former associate in the Glitter and Dance experiment in the UK. Nick’s business is on the 4th floor of an old spinning mill in Leopold St and site of the first G&D shop. Kerry had always complained that the stairs were killing her without knowing that she had a “wart” inside her heart. This time having undergone open heart surgery to remove the wart she climbed the stairs grinning about the change the surgery had made. The chimney in the yard of the mill, (formerly served the steam boilers of the old factory both now heritage listed) was undergoing some repair whilst we are there and we stared in awe at the blokes climbing the various ladders tied to the chimney to do the repair. 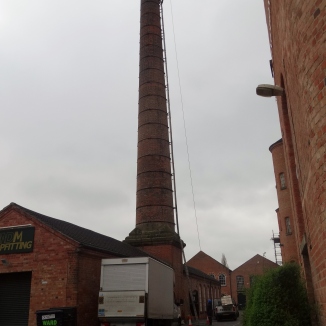 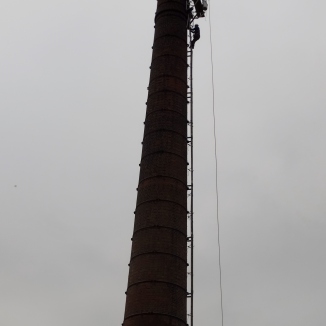 After chatting to Nick regarding business trends and changes around Long Eaton, we jump onto the tram at Toton and headed into the city for lunch with Geoff and Diana Bosworth from the Rotary Club. Diana is a Kiwi who lived in Australia after meeting Geoff and then in Canada with Geoff ultimately moving to Nottingham. Coming from the Antipodes we had a connection. Diana selected the restaurant in a part of Nottingham that is new to us just to show us that we have not been everywhere. Typical Kiwi always trying to out do an Aussie. Not really but we keep the rivalry going.