Our next port of call is Savona. During the night, the ship navigates around the Ligurian coast past Portofino and Genoa. Our plan is to travel by bus to Genoa and check out the old town. It is a bit overcast when we arrive in Genoa. It is an early start and an hour by autostrada to Genoa and we are dropped off at a square beside the aquarium and a fake galleon donated by Roman Polanski after he finished making a pirate movie. 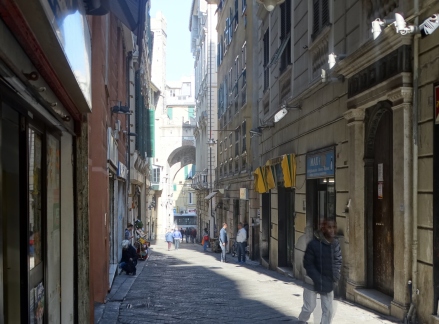 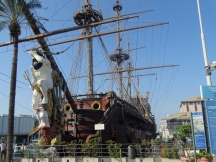 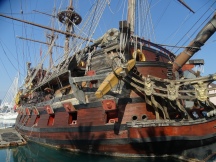 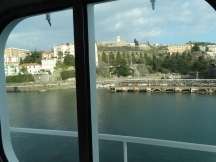 Genoa is a much lively place with its ancient buildings having covered footpath hiding the retail premises beneath the residences above. For the naval historians reading this, you will know of Genoa’s maritime history, its long – time battle with Venice for dominance of the sea lanes and the wealth of the town but those who don’t need to see our photos of the city gates and how residences and shops have all but swallowed it up, the streets lined with shops, the continuous apartments and the piazzas, the public icons on buildings, the churches (including San Maria Madellane where an Italian playing bagpipes played a lament on the anniversary of a deceased husband for the grieving widow and San Pietro in Banchi) and banks that line even the smallest streets. 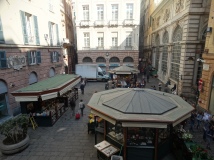 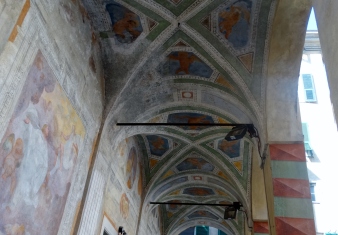 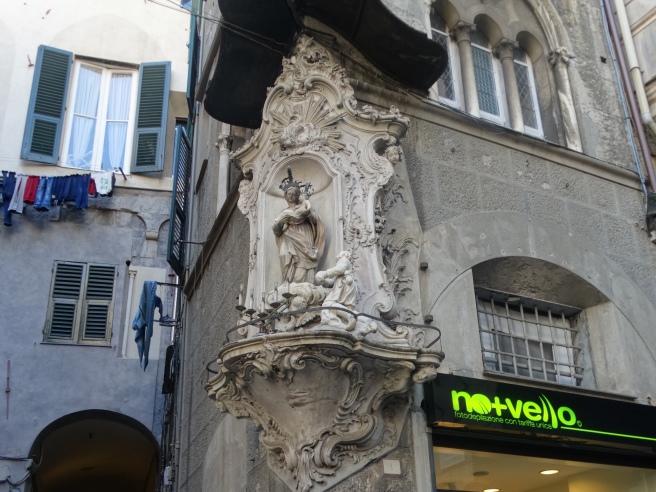 Following the back streets led us to the mall in Via San Lorenzo. Here the more extravagant monuments could be found in Piazzas San Lorenzo (Cathedrale San Lorenzo) Matteotti (Chiesa del Gesu) and Ferrari. Outside the Chiesa del Gesu a protest to abuse of children. After the fountain in Piazza Ferrari we followed into Via Dante and the house of Christopher Columbus, that famous mariner who discovered and claimed for the King of Spain the Americas and all the time he was Genoese not Italian or Spanish. Remember Genoa was a city state with its own government, and naval force and Italy would not be unified until 1861 under Garibaldi. 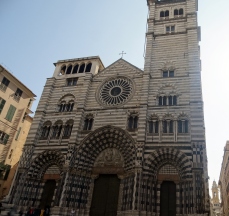 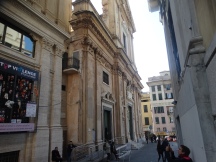 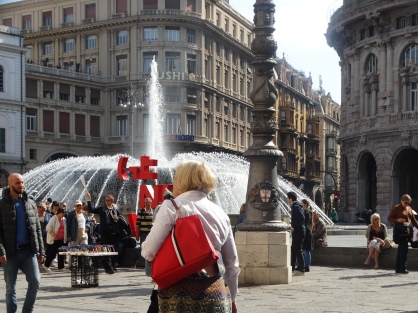 After the house of Columbus, we passed into Piazza Dante and there stood two towers and another town gate. So, we sat in the sun with our stolen rolls from the ship and had our morning tea looking at a Roman ruin and the city gate connected to the remnant of the city wall. Following the city wall, we passed little trattorias, doorways in the wall, and the Piazza di Sarzano. After calling into a ship’s chandelier to pick up a thingo, we made our way back to the bus in Piazza Caricamento and return to the Diadema. 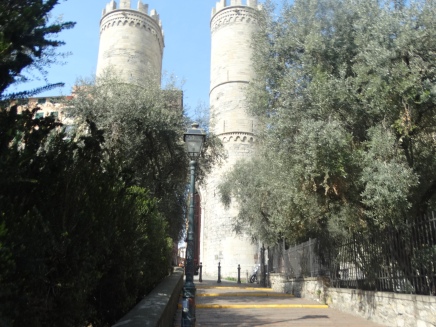 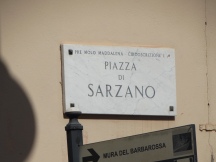